R&B star Ledisi talks about her loyal fans, her music, and holding it down. 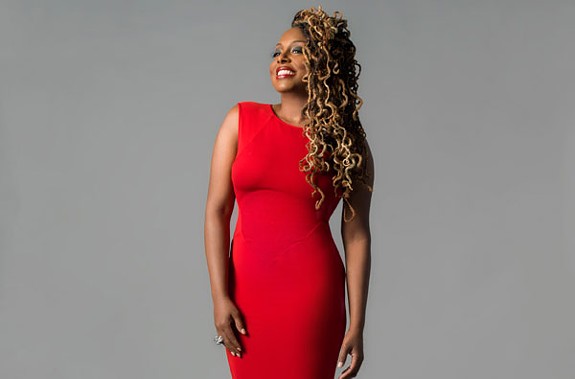 Ledisi doesn’t play by the rules.

She came up hard, fighting her way up through the indie soul scene before getting signed to a major record label. She still kickstarts her projects with her own money, which allows her to make music when she’s ready. The songs she creates (“I Blame You,” Higher Than This,”) are a little to the left of what urban radio typically embraces -- but they play it anyway.

She’s a modern R&B artist with jazz sensibilities and the heart of a rock star. “I don’t fit in, so that's why I fit in,” she said before a Dallas concert recently.

She should though. Her musical lineage almost makes her a royal subject. Her grandfather was Johnny Ace (“The Clock”), a gifted singer who died in a tragic backstage accident in 1954. Her father was soul singer Larry Saunders, who recorded for a label owned by Richmond producer and provocateur August Moon. Ledisi's mother also had her own band, but she put that aside to raise her family.

Her grandfather’s brush with fame and her father’s unheralded career didn’t make her road any easier. She toiled as an independent artist for years until breaking though with 2007’s “Lost and Found,” her first for Verve.

Recently, the singer was in the news for sidestepping a showdown with Beyonce during the Grammys. Mrs. Knowles-Carter was allowed to sing “Take My Hand, Precious Lord,” a song Ledisi performed while playing gospel singer Mahalia Jackson in the movie “Selma.” Fans of Ledisi weren't happy and let be known via social media. Ledisi, however, took it in stride, as she issued a brief statement about the history of the song and moved on gracefully.

Right now, she’s playing the part she wants to, one that she wrote for herself.

The New Orleans native is selling out shows on her current tour, which also features Raheeem DeVaughn and Leela James. She’s touting her latest project “The Intimate Truth,” an acoustic extension of her last release, “The Truth.” There’s even more “Truth” if you can handle it, a deluxe version of the project includes video and more music.

Ledisi talked to Style about her loyal fans, her music and of course, the truth.

Style WeeklySo, your father was signed to a label that was run by someone from Richmond, August Moon.

Ledisi: Yeah, I don’t want to talk about him. [Laughs] I’m going to leave that alone. No publicity for him.

Okay, let's talk about “The Intimate Truth” EP. What made you revisit those songs from your album?

Right after “The Truth Tour,” the first tour from this album, I wanted to do an acoustic tour, just with guitars, and everyone said, “Well, you can't do that because that's too much work.” So I recorded all these songs on my own, (my own money) just to get it done, because everyone didn't understand what I was doing. When I was finished, they heard it and everyone loved it. It's just reminder of my voice and a thank you to my fans.

Is that the first project you had to pay for since your independent days?

[Laughs] No! Are you kidding me? I come out of pocket for everything. 'Cause I move fast. My first recordings were independent. I still have independent thinking. Just because I'm signed to major label, which really means nothing to me, it's still work. It's still getting it done, it's still wanting to please my fans. So, I'll do whatever I can to get it done and turn it in, whether people believe in it or not. I still have that thinking, it never goes away, once you've done it yourself for so long.

You really don't seem to fit into a category, not only musically, but on the business side as well, you're sort of majorly independent.

Yeah, exactly. And that's how I came into the major label thinking. Look, if I can't do what I want to do, then I'd rather not do it. [Laughs] Because it's not going to work for me and I don't want to get on your nerves later, let's just get on your nerves now. (laughs) I have to be free. Yeah, you're right I don't fit in and that's why I fit in.

Your fans came out strong during that little dust-up around the Grammies. How did it feel to see that amount of support?

They amazed me honestly, because I didn't think they were there! (laughs) I thought I was just makin' music and people kind of know me, but I didn't know I was that popular. I appreciate all of it and I'm glad everything happened the way it did. 'Cause I let God move the whole thing and stayed completely out of the way. Because it wasn't my place to say anything or to do anything. I'm grateful to them, wholeheartedly, always have been. They're selling out these shows, that tells me R&B is still needed.

Do you think you'll do some more acting?

You've been invited to White House several times, what is that like?

They're great folk. I love the Obamas, they're beautiful. When they call me, when I'm available, I'm there. And when I can't be, I love that they even call me. It means that they need my support, just like Mahalia was to Martin Luther King. It makes me feel honored.

You're one of the few artists who doesn't lose the audience's attention between songs, when you start talking. Often, you're sharing an uplifting message. Why is that important to you?

I try to sneak in a little bit of spirituality in between booty songs, I have to. [Laughs] 'Cause that's life. Sharing experiences, that's what music's about and that's what being an artist is about.

We gotta do right with each other. We gotta do better. My dad died wanting people to treat him right and they still haven't. And that breaks my heart. I love my dad and mom, I'm holding it up for them.

Ledisi performs with Raheem DeVaughn and Leela James on Sunday March 22, at 7 p.m. at the Altria Theater. Tickets are $47-$67.