Plan 9 and Hardywood celebrate 33 1/3 on Saturday. 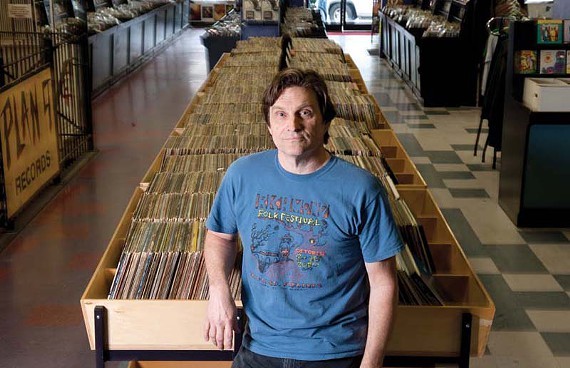 It’s the speed in revolutions per minute at which most records are played.

So it makes sense that Plan 9 Music, which like most record stores now specializes in vinyl, is celebrating it’s 33 1/3 year anniversary this Saturday, March 7 with a big day of live music at Hardywood Park Craft Brewery.

“Vinyl sales, new and used, not surprisingly account for half our business now. A decade ago it was around 25 percent, but we had no new vinyl at the time,” says Plan 9 owner Jim Bland. “The significant thing is the growth of new vinyl sales, which is up 50 percent from 2013 to 2014. Part of that is attributable to our overall recovery over the last two years, most of the rest is the growing interest in vinyl.”

The celebratory day will also be a release party for Hardywood’s 33 and 1/3 Black Vinyl Stout, which is described online as a “full bodied stout [with] a chorus of citrus flavors ... Cara Cara oranges, Sumo mandarins, and kumquats harmonizing together to compliment the deep chocolate malt backbone.” The Black Vinyl Stout will be available on draft and for growler fills beginning at 2 p.m; NYStyleFood Richmond, Goatocado and Carytown Burgers and Fries will be serving food.

Yes, this will be a record geek-out fest with some uncompromising local bands on tap including Hotel X, Diamond Center, White Laces and legendary hard rockers Kepone (see below for times).

Plan 9 is asking folks to bring in vinyl that they bought at the store, that has a special local story, and they’ll try to get it played. I'm pretty sure my first purchase there was a cassette in the early ‘80s, shortly after it opened: The Damned’s “Machine Gun Etiquette.” I still have it and “Love Song” sure would sound good on Saturday (maybe the creepiest “Hey baby, what’s happenin’?” in recorded history). But alas, gift certificate awards are going for the best or weirdest stories about vinyl purchases.

Carl Hamm, aka DJ Carlito, will be there spinning tunes.

"Plan 9 had a big affect on me growing up in Richmond. I was taken there first by my big sis Xeni, who had turned me on to punk rock back in the '80s, after a visit to the skate shop across the street, Beck and Little. I explored so many new styles of music thanks to their revolutionary 'listen before you buy' policy,” Hamm recalls. “Back in the day, Plan 9 was one of the only places in Richmond where you could buy cool, weird, edgy, offbeat music. I am so glad they've stuck around through the years. Another thing I am grateful to Plan 9 for is supporting and carrying stock of local bands and independent releases. They featured my Pop Yeh Yeh record on an end cap for months and it was a huge compliment to me for the hard work I did on that record."

Plan 9 employees, past and present, as well as writers from its 9x magazine, will take a big group photo and toast the memories at 5:30 p.m. Bland says some employees will be coming from Charlottesville.

“I'm most looking forward to seeing and celebrating with my former employees,” he says. “Many of whom were with me for years and we were very close, so it'll be like a family reunion.”

He seems upbeat about the future of the record business.

“Over the next couple of years, the forecast looks great -- all of us are expecting record sales for this year's Record Store Day [April 18] and beyond,” he says. “Further out, who knows? If the interest does begin to wane, it'll take a few years for that to play out and we'll have to act accordingly.”

Here’s a lineup of the day’s action for the 33 1/3 party Saturday [from the event's Facebook page, with video links added by Style]

"Plan 9 invites you, with DJ Carlito of WRIR and special guest DJs, to bring in a special record you got at Plan 9- your desert island disc, rarest, most weird, most embarrassing, whatever disc and share your story of your favorite Plan 9 experience. Tell us your story, we’ll play your record. Gift certificate prizes for best story, weirdest record, etc."

"A 23-year progression of world music and jazz founded in RVA."

"Imagine a time when Neko Case may have fronted an outfit like the Velvet Underground...the group flourishes with flairs of instrumental freak-outs and recordings that breathe the same air as those produced by pioneers of the past like Phil Spector and Joe Meek. Their live shows enable The Diamond Center to develop a sonic atmosphere where their songs can live on forever." -Shannon Cleary

Legendary indie punk from RVA with members of GWAR, Avail and Hoi Polloi.
Prev
Next