Fall of Richmond 150th anniversary to be marked with concert. 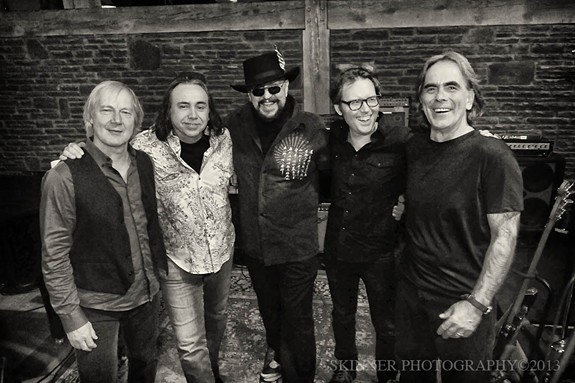 One of the most famous songs in popular music to ever mention Richmond by name is the Band classic, "The Night They Drove Old Dixie Down."

Today the Virginia Museum of Radio and Concert Entertainment (VMRCE) announced a concert, "The Night They Drove Ol' [sic] Dixie Down," being held in conjunction with the 150th anniversary commemorations of the fall of Richmond, the evacuation of Petersburg, the Battle of Five Forks, the Battle of High Bridge and the Battle of Sailors Creek.

The concert on Saturday, March 28, will be headlined by the Weight, a tribute group playing the music of the Band and featuring former members of the Band's later touring edition, as well as Levon Helm and Rick Danko's touring groups. The show starts at 6 p.m. at the Heritage Amphitheater at Pocahontas State Park.

"There probably never will be a more poignant or timely rendition of the Band's classic, 'The Night They Drove Ol' Dixie Down,'" Bobby Wilcox of the VMRCE said in a press release. "The events of Southside Virginia during early April 1865 set the stage for the rapid demise of the Confederacy."

A few facts about the song: It supposedly was written by Canadian Robbie Robertson after he visited the American South, though there was a dispute about that with drummer Levon Helm, who later refused to play the song. It was recorded in 1969 at Sammy Davis Jr's Los Angeles pool room, which the Band converted into a studio. Two years later, Joan Baez had her highest-charting single with a cover of it.

But more important is how the song has endured, as a Harvard press blog notes:

In "Mystery Train," his classic work of rock criticism and American cultural analysis, Greil Marcus described the song as being less about the Civil War than about “the way each American carries a version of that event within himself.” That description conjures Robert Penn Warren’s claim that the Civil War is America’s only “felt” history, “history lived in our national imagination.” And it rightly situates “The Night They Drove Old Dixie Down” as an important reflection of popular memory of the Civil War.

Here's a webpage that explores the lyrics. And here's the Band performing "The Night They Drove Old Dixie Down" during the Martin Scorsese documentary, "The Last Waltz."

Here is video of the Weight performing its namesake:

9 a.m.–4 p.m. - Guided Tours of the historic Hillsman House used as a Field Hospital during the battle. Living historians will provide tours as well as demonstrate/educate Civil War-era medical practices.

2 p.m.–4 p.m. - Tactical Demonstration with hundreds of Living Historians and Re-Enactors conducting an accurate display of the actual fighting that occurred around the Hillsman Farm and the crossing of Sailor’s Creek on the grounds of the Battlefield. Spectators will be able to follow the course of action portrayed in the Tactical Demonstration by walking along Saylers Creek Road which parallels the Battlefield grounds.

9 a.m.– 7 p.m. - Extended hours of the park Visitor Center and Exhibit Hall showcasing artifacts found on the Battlefield as well as detailing the story of the fighting at Sailor’s Creek through educational displays.