Reeling in the Warmth

A roundup of Richmond movie events before festival season starts. 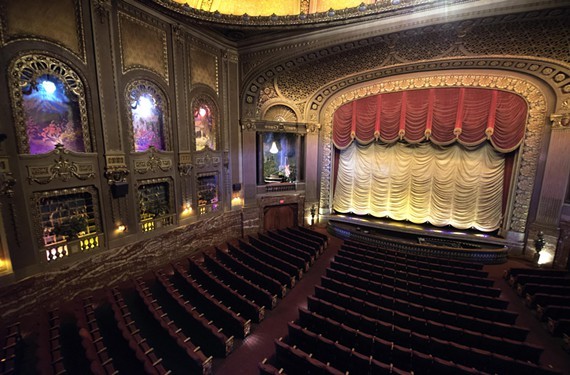 If there's any time of the year to curl up indoors under a pile of blankets and watch a flick, now seems like a good time. But plenty Richmonders aren't scared of heading out into freezing temps. And a movie is even better when you can sit in a theater surrounded by warm bodies ... hacking, coughing and sneezing antibiotic-resistant strains of new viruses into each other's bloodshot eyes.

Luckily, there are a few film events this weekend and a whole bunch after that. We're just around the corner from festival season, beginning with the Richmond International Film Festival next weekend, followed by the French Film Festival and James River Film Festival [Look for more details on those soon in Style].

But first, this weekend:

"Byrd and a Beer: Midnight Features:" This new venture between Center of the Universe Brewing, XL102 and the Byrd Theatre kicks off tonight, Feb. 20, with a showing of the '80s kid classic "The Goonies." Tickets are $5.

Looking ahead, the series has announced a fan choice for April 24. So far, voting front-runners are (in order) "Pulp Fiction," "Breakfast Club," "Dazed and Confused" and "Army of Darkness." C'mon, voters. Haven't you ever heard of a real midnight movie? Something by Jodorowsky, Antonioni's "Zabriskie Point," a good horror flick ("House of the Devil"), or maybe an oddball comedy like Trent Harris' "Rubin and Ed" or anything with Crispin Glover? Those other Hollywood films are classics but also on cable TV every seven minutes. You can pick your own midnight movie by voting here.

On Saturday there's a different breed of cult film being shown at the Byrd at 1:30 p.m. From acclaimed director Sion Sonno comes "Why Don't You Play in Hell?" The host of the event is Midnight Fright’s Armistead Spottswood (Love Tractor); and before the feature comes the premiere of the short film "Black Eyes" (Drafthouse Films) featuring Spottswood's young son, Hays, just called one of the breakout stars at Sundance for "Cop Car" with Kevin Bacon. Other special guests include Rick Spears and James Callahan signing copies of their graphic novel “The Auteur." Again, all this for only five smackeroos.

With regards to the ongoing restoration at the Byrd -- for which all these movies are raising money -- I'm told by a member of the board that they've secured enough funding to restore the vertical blade sign but not enough to complete the package and restore the marquee. So they're looking for another $100k to lock in restoration of the marquee additional to the blade. I know, I know ... all you want to hear is when are the new seats coming? Go have a beer and see a movie, they'll get here quicker.

Elsewhere this weekend: On Sunday, the indie feature "Something, Anything" follows its week-long run in New York with a special screening at the Grace Street Theater at 5 p.m. There will be a Q&A with Director Paul Harrill, a "leading light of Southern regional independent filmmaking." Cinematography for the film was by VCUarts alumni Kunitaro Ohi ('07).

Also just around the corner there are some new music documentaries playing Richmond likely to draw nice turnouts.

The documentary "Records Collecting Dust" plays next Friday, Feb. 27, at Black Iris from 8-10 p.m. This film takes a fairly simple route -- asking famous underground musicians to talk about their record collections -- in order to examine the personal connection people feel toward vinyl and its influence. Check out the trailer.

Then a few weeks later: On March 15 at the Byrd Theatre, see the latest film to explore the influential early-'80s music scene just north on Interstate 95. "Salad Days: The Washington DC Punk Revolution" also will feature a Q&A with director Scott Crawford and producer Jim Saah. No start time or cost listed yet, but 400 people already have joined up on Facebook. Expect this one to be a real movie event with lots of Richmonders having a special place in their hearts for the whole DC sound.

And on March 14 (I'm stoked about this one) Movie Club Richmond proudly presents "HITS," a dark comedy debut written and directed by comedian/actor David Cross. The film, which explores the new age of celebrity, will screen Saturday, March 14 at the Byrd Theatre at 1:30 p.m. Pre-sale tickets will be available starting March 1 at Chop Suey Books and the Video Fan, and will also be 'pay what you want' as requested by Cross. The Byrd Theatre box office will open for day-of-sale tickets at 1:00 pm on March 14.