The reviews of "Better Call Saul" are coming in. What did you think? 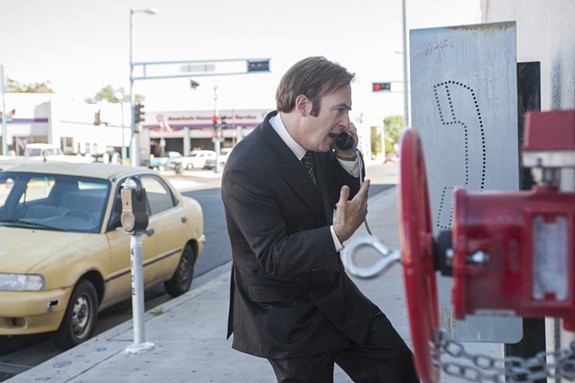 Well, the first two episodes for AMC's “Better Call Saul” are in the can. And so far I've gotta agree with most of the critics I’ve read: Looks promising, bitches.

This is coming from someone who mostly watches movies or sports on television. I've been burned with shows before. These days too many slide straight into suck-town (see Showtime’s “Homeland” or HBO’s “Girls”), tired soap operas that beat whatever strengths they had to death while barreling toward irrelevance.

Which is part of what made “Breaking Bad” unique. It only became better, peaking in its final season. Our local boy Vince Gilligan has a reliable track record. Not to mention he spent his childhood in the ‘70s watching movies at the old Cloverleaf Mall like I did, which makes me root for him for some strange reason.

First thing to know about the spinoff, fans of “Breaking Bad” will not be disappointed [warning: spoilers ahead]. That show’s mixture of well-written characters, dark humor and violence remains intact; the first episode of “Saul” features teenagers on trial for having sex with a severed head while the second has skaters getting their legs violently broken in a beautifully-shot desert by Tuco, a psychotic dealer from “Breaking Bad.”

But while former characters already are making appearances, the show seems capable of finding its way without them.

Central to the appeal is Jimmy McGill (later known as Saul), a lowlife public defender played by comedian Bob Odenkirk with rapscallion charm. Instead of charting the devolution of Mr. Chips into Scarface a la Walter White, this spinoff aims to show us how McGill transformed from struggling young attorney driving a Suzuki Esteem to the sleazy “criminal lawyer” from the commercials. Not quite the same distance to travel.

Perhaps expectedly, we’re seeing that Saul once was a man of conscience who meant well. This is a fringe character you can root for, and not least because of his “smart mouth.” So far Odenkirk is playing him with gritty resilience and almost surprising depth. His guilt over what happens to the moronic skaters in the desert is only example.

But as a recent blog in the New Yorker pointed out, “For ‘Better Call Saul’ to succeed, it will need characters like him to become as robust and fascinating as those who revolved around Walt -- because, ultimately, the show needs to tell a story that’s bigger than its protagonist. And in the second episode we got a sense of what that bigger story could be: the show could follow the money.”

There are two especially promising characters so far: Actor Michael McKean plays McGill’s older brother Chuck, an attorney being fleeced of his share of a local law firm while dealing with a psychological illness that requires him to wear a space suit after exposure to cell phones. The other is Nacho, a quietly menacing drug partner of Tuco’s who seems to share the same insidious cunning of “Breaking Bad” favorite Gustavo Fring, memorably played by actor Giancarlo Esposito.

Of course, the show looks great too, picking up where “Breaking Bad” left off with big-name directors such as Michelle MacClaren helming the ship, ratcheting the tension masterfully with sharp humor and inside nods to Gilligan’s hardcore fans.

Already we know that Saul’s path will lead to him to a sad and lonely existence as a Cinnabon employee in Omaha. Before then, Gilligan will have plenty more surprises in store.

Which really is what’s helped him become one of the highest profile television writers in the world: He respects his audience at all levels of the production. And he's always looking to upend our expectations.

When you think he’s in it for cheap thrills, his characters do something profound. And by now we know that even the tiny, subtle pieces will one day make sense.

Odenkirk was in a friend of mine’s wedding, so I asked her what she thought of his work here and she didn’t seem surprised.

“So exciting,” she said via Facebook. “I met Bob in the early ‘90s is West Hollywood when he and Andy Dick were still doing Larry Sanders, and Bob was then working on a pilot for HBO that would not take until ‘Mr. Show’ a few years later . . . Super guy -- sweet and smart and that very dry wit. Modest, too, he lived down in the Fairfax and one day I went over and saw his Emmys on the shelf. I was like, 'Wow, Bob!' and he said, 'Oh, they'll do for now.'"