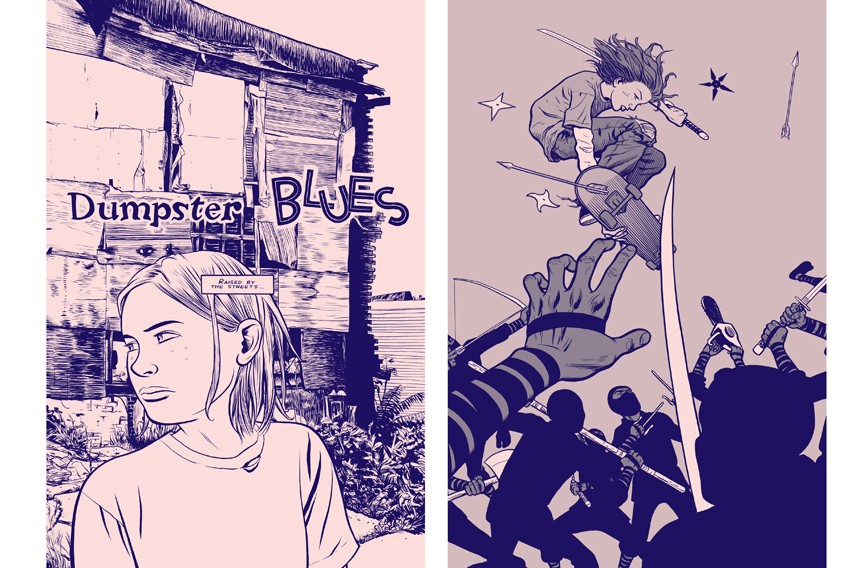 These are the foes faced daily by Jesse “Street Angel” Sanchez, the world’s greatest homeless skateboarder and 12-year-old martial artist. Originally published as a comic book limited series, Richmond-based AdHouse Books has re-released this collection of Jim Rugg and Brian Maruca’s work in a single volume, this time colored in pink and purple.

Armed with a skateboard and sweet kung fu skills, Street Angel goes to town on the baddies, kicking ass and beheading plenty of ninjas. With her independent and devilish nature, in some ways Street Angel seems like a “Tank Girl” for a younger generation of readers. Unlike “Tank Girl” there are no references to sex, though Street Angel does enjoy a good 40 oz.

Action sequences take on the cinematic quality of Jack Kirby, street scenes have the gritty feel of Will Eisner’s “A Contract With God,” and the episodic stories have a dash of Hernandez brothers absurdity. This is, after all, a world where Incan gods can initiate a street rumble between Captain Hernán Cortés and ninjas, mad scientists scheme to recreate Pangea, and ninja dads throw backyard birthday parties for their ninja sons.

Near the end, Pittsburgh-based Rugg and Maruca’s other great creation Afrodisiac gets a cameo. The Blaxploitation hero originally appeared within the pages of “Street Angel” comics, and here the duo join forces to take on an army of rednecks. Aged and no longer the sex machine who fought Dracula and Richard Nixon, it’s the Princess of Poverty who saves the day and kicks this round of asses.