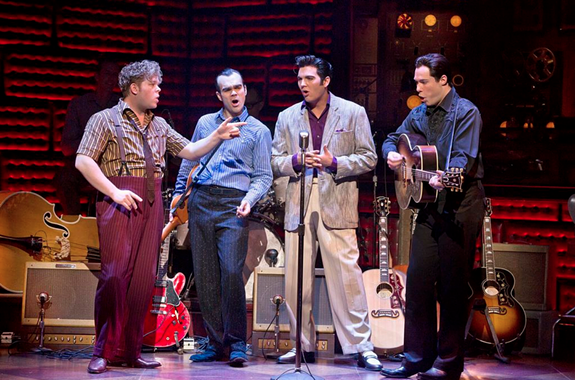 We’ve all seen the photo. Walk into the dorm room of every other freshman music major and you’ll find a poster of Elvis Presley, Johnny Cash, Jerry Lee Lewis and Carl Perkins gathered around a piano.

While the actual quartet primarily covered country and gospel songs in the session, here they’ve used the meeting to run through the musicians’ greatest hits, creating a jukebox musical of songs from the era of jukeboxes.

The cast standouts are Scott Moreau as Johnny Cash and Gabe Bowling as Carl Perkins. Like Cash, Moreau’s deep bass-baritone sounds like it’s coming from the bottom of a well, and Bowling has the guitar licks and perfect voice for Perkins. Understudy James Scheider has the moves and piano chops of Lewis, but his voice doesn’t quite match The Killer. Jacob Rowley’s Elvis is disappointing, coming across as caricature.

The show’s only whiff of a plot concerns Sun Records owner Sam Phillips and how, after making stars out of these country boys, they would all eventually leave him for bigger deals with bigger record companies. The conflict feels like an afterthought and is luckily kept short.

The biggest problem with the show is one that plagues virtually every show at the Altria Theater: You can’t understand the dialogue. The venue has always had the acoustics of a tile bathroom, and theatergoers had hoped that the recent renovations would fix this problem. Sitting in the orchestra section, the actor’s southern accents were incomprehensible half the time, sounding like Gomer Pyle attempting scat.

In short, “Million Dollar Quartet” is a fun and energetic reworking of early rock hits. The plot is trivial, but the group’s big sound and toe-tapping numbers will have you singing “That’s All Right, Mama.”