Opening and commemoration of historic site for Friday, Jan. 16. 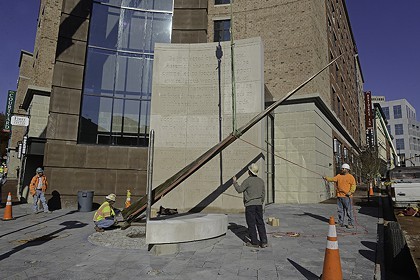 The First Freedom Center, with its monumental spire installed to mark the site where the Virginia Statute of Religious Freedom was born, is opening next Friday with a media shindig and tours for the public.

But the surprising news may be what Style learned today: As of July 1, the Valentine museum will become the parent of the First Freedom Center.

"The First Freedom Center will be dissolving and we will become new stewards," confirms Domenick Cassucio, director of public relations and marketing for the Valentine. "There will be an interim period. We haven’t worked out complete staffing structure, but we will have a staff person [at FFC]. ... The Valentine Museum will still be on Clay Street."

The First Freedom Center is connected to the newly finished Courtyard and Residence Inns by Marriott and will feature 2,200 square feet of installations that "delve into America's experience with religious liberty from its European roots through today," according to a press release from FFC.

The FFC will become another property managed by Valentine to go along with the 1812 John Wickam House, the Valentine, the Valentine Garden and the Edward Valentine Sculpture studio, one of the only surviving 19th century sculpture studios in the country that the public can visit. In addition, the FFC would be an excellent stop addition to the Valentine's guided walking and bus tours.

As far as the opening goes: A ceremony is scheduled for Friday, Jan. 16, at 12:30 p.m., at the First Freedom Center featuring remarks by Gov. Terry McAuliffe and Mayor Dwight Jones. Other guests include Delegate Betsy Carr, former Sen. George Allen and "Thomas Jefferson," according to the release. The public opening starts at 3 p.m. and there will be tours until 5.