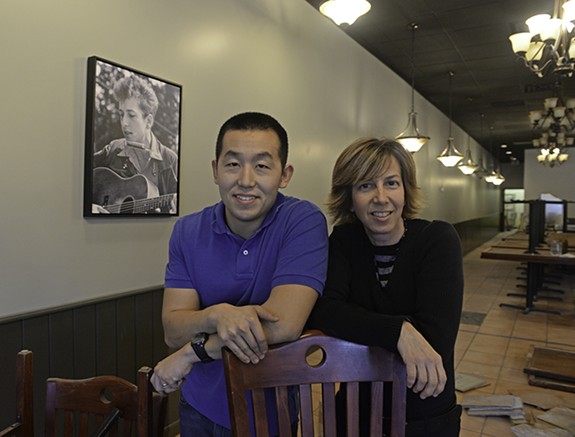 West Enders may no longer have to travel to Ashland Coffee and Tea to get their folk music fix.

The Tin Pan, a new listening room and restaurant, is coming to Quioccasin Station near Regency Square mall in early 2015. The 5,000 square foot venue (3,000 front of house) plans to open in March in the former space of Mexican restaurant Don Pedro at 8982 Quioccasin Road.

Named after the influential Tin Pan Alley songwriting scene of early 20th century, the venue is a joint project of local music retail veteran, Lisa Harrison, who ran Harrison Music for 15 years, and former marine Kevin Liu, who has written a book (“Craft Cocktails at Home”) and contributed to Serious Eats as a blogger.

“Basically it will be music you could have dinner with – folk, Americana, bluegrass, jazz, pop rock,” general manager Harrison says while giving me a tour of the large space that still has ornate dining light fixtures of Don Pedro overhead. Harrison hopes it will be similar in style to Ashland Coffee and Tea, with no standing room, only seated guests. “Artists like Livingston Taylor, Rickie Lee Jones would be great," she adds.

They plan to have live music around four nights a week, featuring national, touring regional and local acts. Harrison is working with an individual talent buyer out of Connecticut for national entertainment as well as some local groups.

Liu cites the Listening Room in Nashville and Towne Crier Cafe in Beacon, NY as models for the space. “Casual but polished, intimate and homegrown," he says. "But really featuring the artists front and center."

The space is still busy being renovated at a cost of around $45,000, but it was clear the focus of the room would be on the large stage and the long bar. Although occupancy is larger, Liu says there will likely be around 160 seats per show. The pair is currently hiring part time and full-time staff, which Harrison says will likely fall somewhere between 15 and 30 positions.

As far as the restaurant goes, Liu says that the concept is to go back to the Tin Pan Alley days around the turn of the 20th century in New York, when the “mish-mash” of American cuisine was born – but with a modern touch.

“We’re going to try to do those things, like spaghetti, but do it right with the right locally sourced ingredients," he says. "And I’m loving the Prohibition era cocktails."

The chef in charge of the large kitchen is Brian Nageotte, who has 20 years of experience cooking in Central Virginia at restaurants such as Firkin and Bulldog in Stafford and Burton’s in Charlottesville. The Tin Pan will be open for lunch but the shows will all be dinner time events, with some live music during brunch on the weekends. There’s also an outdoor patio.

“We’re hoping to draw within a 15 mile radius and further with the national acts,” Harrison says. "We've got a great sound system and top of the line lighting."

Richmonders may remember Blue Bistro was once in the spot and had live music. Harrison says that if you’re in a local band that fits the bill, feel free to contact her at booking@tinpanrva.com.