A Letter to Sony Pictures from Todd Schall-Vess

Byrd Theatre manager blasts Sony after being denied "The Interview." 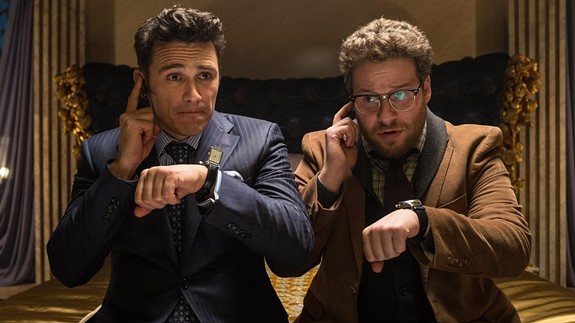 You may have heard that the Byrd Theatre wanted to screen the controversial film "The Interview" on its original release date. Well for those who care . . . Sony Pictures didn't go for it because the Byrd was a "discount" theater.

Here's what Byrd manager Todd Schall-Vess had to say in response to the big whigs at Sony who -- at last check -- were unmoved from their position:

A Christmas Note to Sony Pictures:

"'The Interview' is showing in Northern Virginia and Farmville. The Goochland Drive-In starts it in the new year. And now you can watch it online for $6. But with our FB fans going crazy for the film, coverage from all three local networks plus radio and print and the holiday upon us . . . you wouldn't book it. We have a genuine treasure here -- a 1928 vintage movie palace that is on the national and state historic registers and a closely held local gem with 1300 seats ready to sell out ( and we would have! ) All of the multiplex theatres in the country turned their backs on you, and we didn't.

I said YES, I will start it on Christmas day, YES I will run it for two weeks, YES I will charge first-run prices for it and pay your percentages accordingly. And your response? "We are afraid that your customers will blame us for you having to charge more." Well....that is utter bullshit. And you know it.

Is there anything else you're afraid of? Let's check the list: North Korea, hackers, taking responsibility for your own emails, accusations, threats, the Byrd theatre patrons. Oh, and apparently you have some deep-seated fear of digital security that continues even after the incursion, since it affected your online release of the movie.

So much fear....you should give up the movie business....you aren't cut out for it. Try insurance."

The media coverage of the Sony debacle has seemed pretty relentless lately. A recent Washington Post article noted that if the movie was "seen by audiences around the world, and if copies are pirated in to North Korea, it is a very real challenge to the ruling regime's legitimacy."

Schall-Vess told Style a little more about the background of his attempt to provide "The Interview" for comedy-hungry Christmas patrons:

"Sony beginning to book the film at independent theaters started when a bunch of us that are part of the Arthouse Convergence Network signed a statement saying we were willing and able to show the movie and wanted the opportunity," he said via e-mail. "Rather than embracing that as an opportunity to do the right thing, Sony is using us to leverage first-run chains and promote online release."
Prev
Next