A controversial local billboard from Parents and Friends of Ex-Gays (PFOX) that received national media coverage for its message ("No One Is Born Gay") now has a local response.

A group photo taken by the Gay Community Center of Richmond is now a digital billboard on their property that reads "We are all born to love." Currently it can be viewed 1,300 times a day from I95/64 corridor. 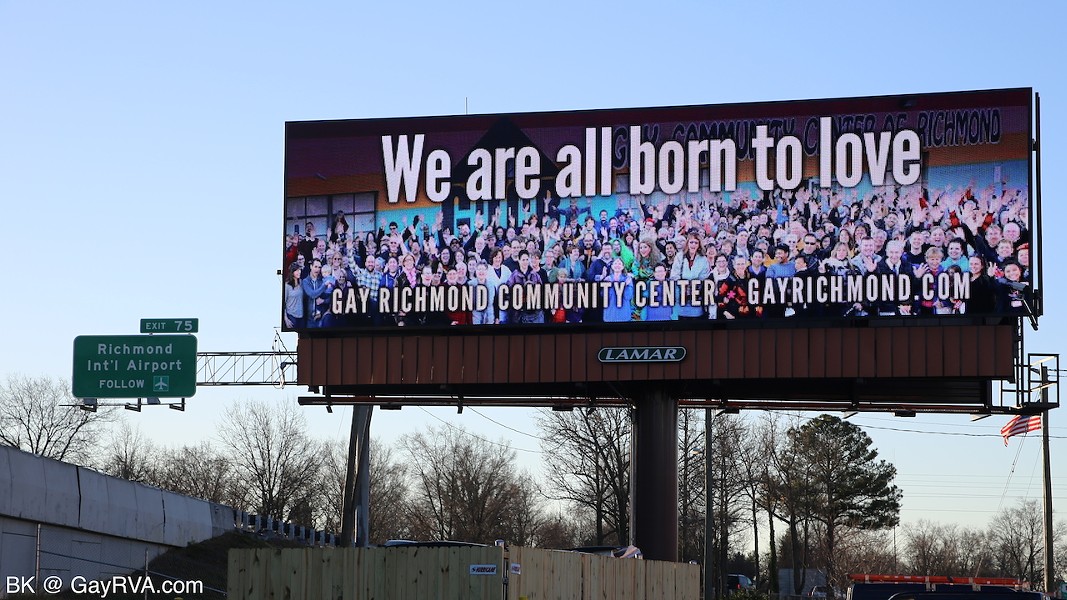 Bill Harrison, executive director of GCCR, said they put the word out for the photo shoot mainly through social media and over 400 people showed up on Sunday.

"This gave a lot of people the opportunity to send a very clear message that Richmond is a welcoming city," Harrison says via e-mail. "Once again the opposition gave us a wonderful opportunity to raise awareness. The other billboard hurt lots of folks, I think especially people 50 and older, many of us who had fought our sexual orientation for years. We know firsthand the dangers that can bring."

The ad space is being donated by Lamar Advertising and the billboard will be displayed on I95 and also on I-64 East near the West Laburnum exit. This series will run until Dec. 21.

There are plans in the works for more.

"The other billboards are under design now," Harrison says, adding that he had not heard anything from PFOX. "I did not expect too although I am going to send them a thank-you note. You know how we Southerners are."

Style reached out with questions to PFOX, which lists a PO Box in Reedville, Va. but have not received a response yet.

"The ACLU of Virginia believes that the most appropriate response to speech that offends is more speech," says Claire Guthrie Gastañaga, executive director of the American Civil Liberties Union of Virginia. "The billboard is a great example of this, and the message that we are all born to love is perfect. I was honored to be among the hundreds of people who were at the Gay Community Center for the photo shoot."