The Joy of Sandwiches

Hatch Local wouldn’t be half as fun if not for the nostalgia of Fat Kid Sandwiches. 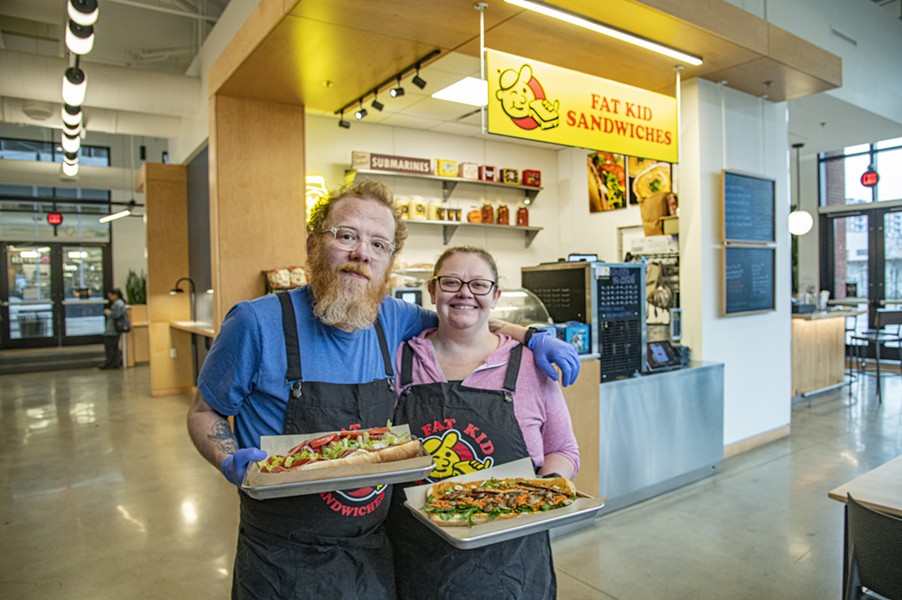 Scott Elmquist John Martin and Liz Clifford have a combined 47 years of diverse restaurant experience, but prefer the joy of delivering monster sandwiches.

Walk up to the Fat Kid Sandwiches counter at Hatch Local and you’re immediately greeted by memorabilia that owners Liz Clifford and John Martin wish they had as kids: Vintage lunch boxes feature The Mask, Strawberry Shortcake and Masters of the Universe.

Before customers even get a chance to order, this wife-and-husband duo want them to rediscover a childlike happiness in the enjoyment of food.

“I definitely have been that fat kid for my whole life, and there is joy in food in a way that there is not that same joy in other things,” says Martin. “We want to get back to a time when you walked into the lunch room and you had a cocky walk because you had the Capri Sun and the blue Doritos. You kind of lose that once you get old enough to understand the world around you, and we want to get back to that.”

Although Clifford and Martin may be best known for their fan favorite footlongs, the duo boasts a combined 47 years of restaurant experience that ranges from Michelin star restaurants to a stint in Italy. While Martin will still bake absurdly delicious, upon-request cakes (think peanut butter, mayo, and Cheez-Its) as a sign of his pastry chef past, the couple has mostly left its fine dining bonafides in the rearview.

“We don’t want to make that kind of food anymore,” says Clifford. “It means so much more to me to make a 2.2 pound sandwich and see someone’s grin when you hand it over.”

In 2018, shortly after Martin and Clifford moved here from Washington, D.C., the couple landed jobs at Comfort restaurant and quickly immersed themselves in Richmond’s robust food scene.

As Comfort’s era came to a close, they jumped over to Julep’s for a brief stint while finalizing their own concept for a ghost kitchen. While their jobs at those two popular Richmond restaurants culturally acquainted them with what many folks love to eat in the former capital of the Confederacy, their own backgrounds are much different.

“I didn’t grow up cooking all this Southern food in the D.C. suburbs,” admits Clifford. “It’s not that far away, but it’s a whole different culinary world. We come from this northern sandwich culture with family lineages and traditions going back a hundred years.”

Featuring a menu packed with cheesesteaks, coldcut subs, and a classic Philly roast pork and broccoli rabe sandwich, the northern influence could not be clearer.

After Clifford and Martin moved into Hatch’s Maury incubator in June of 2020, the couple had six months to experiment before settling on a menu and moving into the test restaurant in early 2021. Since opening a second spot to order their sandwiches at the Hatch Local food hall in March of last year, Fat Kid Sandwiches has hit its stride. 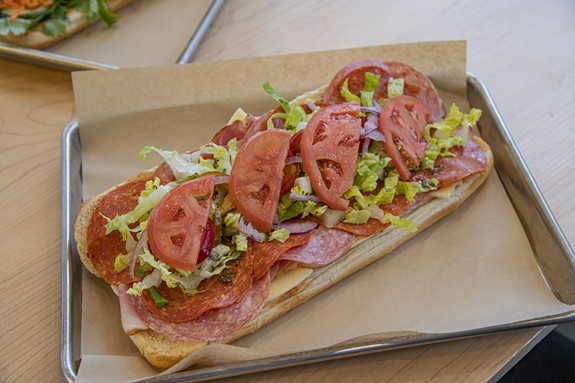 Far and away their top seller, the Italian is a smorgasbord of artfully layered, top-notch ingredients that Martin and Clifford refuse to compromise on. Smoked ham, hot capicola, Genoa salami, old-fashioned pepperoni, sharp provolone cheese, lettuce, tomato, onions, oregano vinaigrette, and hot peppers combine to give this hefty sandwich its savor. The two controversial toppings of mustard and mayo are optional.

Dreamed up during the chicken bacon ranch craze a couple years ago, Fat Kid’s turkey bacon ranch is the menu item “that gives you healthy feels even though it’s really not at all,” according to Martin. Raw turkey breasts are seasoned with herbs, garlic, and olive oil before being cooked to give the meat flavor far beyond the deli turkey many people are used to. Hand-cut, the thick slabs of turkey meat give the sandwich big texture differences between all the ingredients. Martin’s housemade ranch dressing seals the deal. 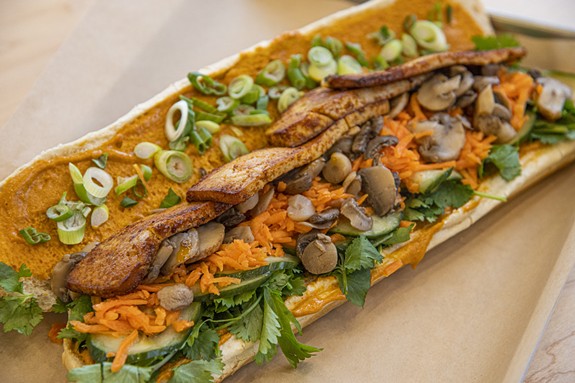 Lest customers think that Fat Kid has no sandwiches to please vegans and vegetarians, the bahn mi on the menu actually began as a best-seller for Garden Party, a plant-based munchies concept the owners explored before settling on their current business. Despite its occasional pork version, the thin-cut, marinated, and pan-seared tofu is the more popular of the two. With a savory, red curry peanut sauce, fresh scallions, cilantro plus pickled cucumbers, mushrooms, and carrots, the bahn mi delivers the goods.

Armed with their new soft serve machine and a multitude of in-house made mixes, the chocolate, vanilla, and swirl ice cream comes in a cup, sandwiched between two homemade cookies, or in the Cookie Monster Sundae, a heaping of soft serve, cookie crumbles, and chocolate sprinkles in a 16-ounce cup. “A brave individual could go for it, but two or three people could likely get in there,” says Clifford.

By now you've probably recognized the thread that runs through everything at Fat Kid Sandwiches: a desire to delight the inner child in their customers. And whether Martin and Clifford are putting jalapeño poppers on sandwiches or experimenting with three and six-foot party subs, they feel they have found their true calling.

“We just want to make real fat kid sandwiches,” says Clifford. “The foods we liked to eat as kids, but a lot bigger than anyone would think of.”