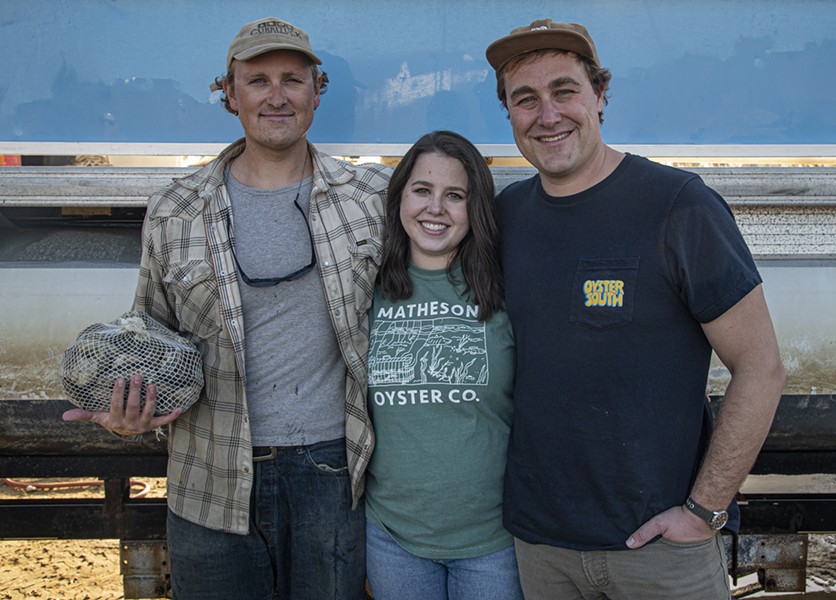 “I can’t think of much in the water that isn’t supported by oysters,” says Sarah Matheson Harris. “They foster such a robust eco-system.”

Matheson Harris is the owner and chief marketing officer of Matheson Oyster Co., a newly launched oyster farm located in her hometown of Gloucester, Va.

Matheson’s land operations are, as working waterfronts tend to be, humble in nature. An old, restored trucking depot houses the oyster grading system and walk-in freezer. Matheson Harris says when they first acquired the marsh-edged property in 2020, they spent countless hours cleaning up trash—including two burned out 18-wheelers.

Two years later and they’re fully up and running.

A quick boat ride will take you from the company’s terrestrial headquarters to their 16-acre farm floating at the mouth of the Mobjack Bay where the East, North, Ware and Severn Rivers converge.

The water here is salty-brackish, with an average salinity in the low 20 parts per thousand (compare this to big sister Chesapeake’s 25-30 salinity scale). The farm, marked by simple wooden pilings, is surrounded by protected wetlands. She grew up on the Ware River. Her husband and Matheson CEO Eric Harris and her brother-in-law, chief oyster farmer Cory Harris, grew up across the way in Yorktown. Bouncing in time with the waves on their hardy, 26-foot fiber glass restored pontoon workboat, the three are clearly at home on the water.

“Oyster farming is one of the few, net-positive farming practices,” says Matheson Harris. “It takes nothing but gives back.”

Giving back is ingrained in the ethos of this young company, a tenet that was always nonnegotiable for all parties, especially Sarah, who tragically lost both parents in 2017 to different illnesses.

“It’s definitely a personal story,” she says. “I’m an only child. When I lost my parents, I had to decide if I wanted to keep a foot in this community that I grew up in or just leave and move on.”

Growing up, her father had an oyster garden he tended off their dock. She learned from a young age that oysters not only act as a natural water filter, they also create large-scale habitats that benefit the marine food web from plankton to apex predators. 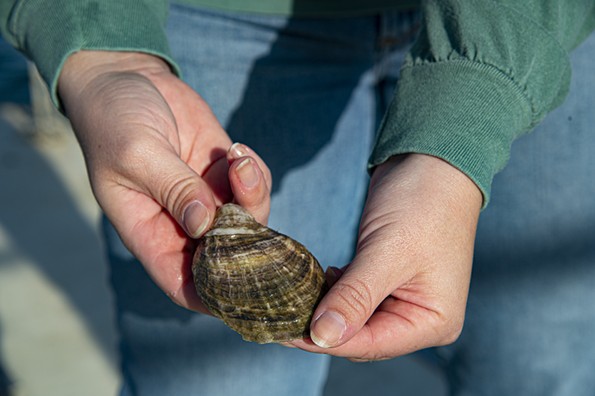 Every oyster—whether harvested from wild clusters or grown in cages—has its own merroir, just as a wine has its own terroir. An oyster is slowly and surely shaped by its environment, from the salinity and temperature of the water to the nutrients it has access to. You may find no better way to taste “place” than on the half shell.

Oyster connoisseurs know a Gulf oyster from a Chesapeake oyster from a Prince Edward Island oyster. And now, they’ll know a Mobjack oyster.

“They are always a perfect oyster—every single time,” says Cocodrilo executive chef Brandon MacConnell of the Matheson signature oyster, Wavelengths. “I don’t mind shucking them even when I have to do 1,000.”

MacConnell isn’t being hyperbolic. This October, the chef joined forces with the Matheson crew at Oyster Wars in D.C., shucking—and quickly running through—more than 1,000 Wavelengths. They were a crowd favorite.

Right now, MacConnell’s serving these slightly salty, slightly sweet bivalves wood-grilled with bone marrow and chile butter. Going forward, Matheson oysters will be a permanent fixture, in some form, on the Cocodrilo menu. 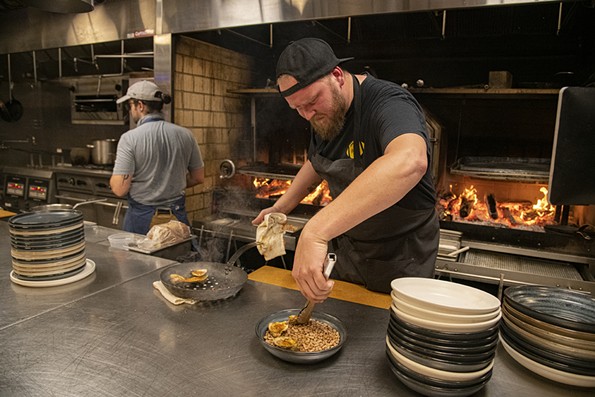 MacConnell isn’t the only local chef enamored with the deep-cupped Mobjack beauties. “Once shucked, I noticed a plump oyster sitting in a porcelain white shell,” says Lemaire executive chef Patrick Willis. “The flavor was perfectly balanced. I knew our guests would enjoy them as much as I did. So, I immediately put them on our menu.”

Becoming the signature oyster at Lemaire and being lauded by two of Richmond’s top toques so soon after hitting the market is no small feat, especially for such young entrepreneurs who don’t possess the typical background of folks involved in commercial shellfish aquaculture.

“Oyster farming is one of the few, net-positive farming practices,” says Matheson Harris. “It takes nothing but gives back.” tweet this

Sarah, Eric and Cory are not third generation oyster farmers. They didn’t study marine biology in college. Eric has his MBA from the University of Richmond and Sarah graduated from the VCU Brandcenter. They’re whip smart and business savvy, but more importantly, they’re not afraid of hard work. And oyster farming is hard work.

Most oyster farmers in Virginia use cages (floating or bottom) or a suspended system (like the Matheson team) to grow their bivalves, rather than relying on wild reefs to produce their bounty.

The Matheson farm is open to the elements, including southeast winds that sometimes churn two- to three-foot waves. The pontoon can handle the turbulence, and the brothers Harris—the only two humans in charge of tending to thousands of growing oysters—aren’t afraid of a few whitecaps. They jump in the chest-high water in wetsuits to demonstrate the flipping and adjusting of cages, inspecting oysters that have been growing since summer 2021. 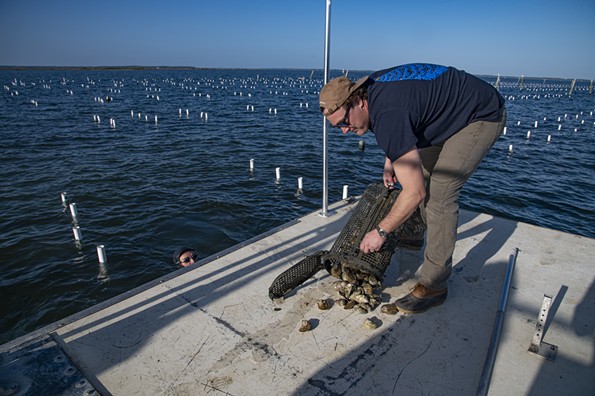 The Matheson crew acts nonchalant about the recent threat of Hurricane Ian. Their high-tech, Australian-crafted gear is designed to withstand “a typhoon” says Eric. In advance of inclement weather, they simply drop their bivalve baskets down to the bottom “clip” where the oysters can exist in peace, unaware of swirling dangers above.

The inner tidal adjustable long line suspension oyster growing system that the three chose to use is rare around here, but Eric says after much research, they knew this would be the most efficient method. Cory notes that they can harvest their oysters in 30-40 minutes from leaving the shore to returning to grade the oysters, which have been growing on average for 16-18 months.

Oyster farming is certainly a long-game—only now can the team start introducing their assiduously cared for product to the vicious market.

“Because an oyster farm takes so long to create, so much of that time goes into deciding what you want to invest in,” says Sarah. It was only natural for the three to seek guidance from experts working at the nearby Virginia Institute of Marine Science. She says their mentors at VIMS helped educate them on growing practices, equipment pros and cons and, perhaps most significantly, where to lease the water farm. 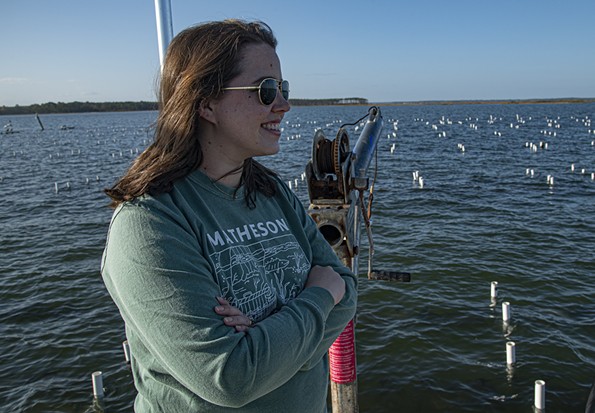 “Eric spent months going through maps of the Chesapeake Bay looking at depths and salinity and water flow,” says Sarah. “The right equipment is useless if you don’t have the right spot and visa versa.” There are no happy accidents in oyster farming—well, except the occasional pearl. Everything is carefully considered and carried out through rain, snow, tears and interminable permitting issues.

But if there were a serendipitous moment for Matheson, it happened one night when Eric was combing through maps, considering sites and their feasibility. Things to consider include proximity to homeowners, the likelihood that a farm would cause navigation issues, are there a lot of boaters and jet skiers in the area, what is the depth of the water and what gear can be supported there.

“One night I saw this little sliver on the map that had not been applied for,” says Eric. “We applied for the lease and got it.”

Once they procured their 16 acres, the Matheson crew went work. Chef MacConnell, who has shucked and worked with just about every oyster in Virginia, says the Matheson oysters are “Thick. They’re edge to edge. They have a deep cup all the way through with an awesome flavor. They’re such a good quality product.”

Again, this stellar quality control is no accident. Sarah describes their oyster farming technique as an “oyster boot camp.” The suspended basket system allows the team to raise the oysters and expose them to sun and waves in carefully measured increments. “That wave action forces them to think they’re under attack, so they’ll build stronger shells and grow deeper and fattier, too,” says Sarah.

The location of their farm also contributes to the quality of the oyster. “The Mobjack has one of the more unique flavor profiles because of the four converging rivers,” says Sarah. “It’s been well-received everywhere we go.” 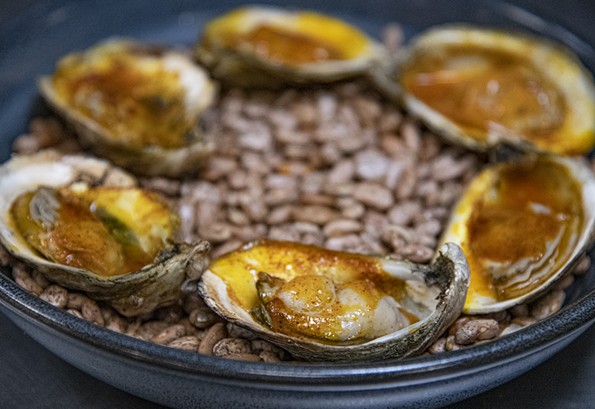 While their oyster is clearly a hit with the chef crowd, Sarah says they aren’t racing around town to pawn these oysters off at every doorstep. Instead, they’re forming “thoughtful” partnerships with restaurants and markets from Richmond to D.C. and beyond.

One of these partnerships is with The Salt Line (Oyster Wars host) and sister restaurant, Dauphine’s. “It’s fascinating how they expose their oysters to the sun on the long line system and create stronger, more polished shells,” says Dauphine’s executive chef Kristen Essig. The critically acclaimed chef grew up with Gulf oysters, but says that the Chesapeake—and now, the Mobjack—are producing some of her favorite bivalves.

“I don’t think people who are eating oysters always intrinsically understand how physically involved the people behind the oysters—the farmers—are,” says Essig. “If you look at traditional farmers tilling fields people think ‘Oh, that’s back breaking.’ But so is this, it’s something people work hard for. I think that’s such a special part of food, and I think this oyster represents that so beautifully.”