Scott Elmquist Europa Crust owner Jeff Laine is bringing killer sourdough to Richmond: “You have to have a brain like a scientist in this business because it’s half-science and half-artistry,” he says.

Jeff Laine didn’t start experimenting with sourdough in the first wave of the pandemic when homemade bread became all the rage. However, after he lost his job in food science due to COVID cuts at a spice company, baking loaves became his main source of dough. With years of experience in recipe development, he figured the style of bread most closely associated with San Francisco couldn’t be too hard to perfect.

“I started doing the bread thing to make ends meet at home, and I was so blown away by how good sourdough bread is,” Laine explains. “The majority of the country is not eating sourdough and doesn’t even know about it. If they do, it's probably fake and the producer just adds acetic acid in to make it taste sour.”

Laine began his business by delivering loaves to a few dozen homes around town, unsure of how to transform his newfound talent into a fully-fledged way to pay the bills. The taste of his sourdough was always on point, but it took him a year to figure out how to ensure a beautiful exterior every time.

After that, business really began to boom.

“I went from baking in my kitchen, to my garage, to my wife saying, “Get this out of my house!” he says.

His brother-in-law at the time, also an entrepreneur, believed in Laine’s abilities to turn his superior sourdough creations into a career and helped him secure a three-year lease on Europa Crust’s current location, a demure storefront at 14th and Main in Shockoe Slip. 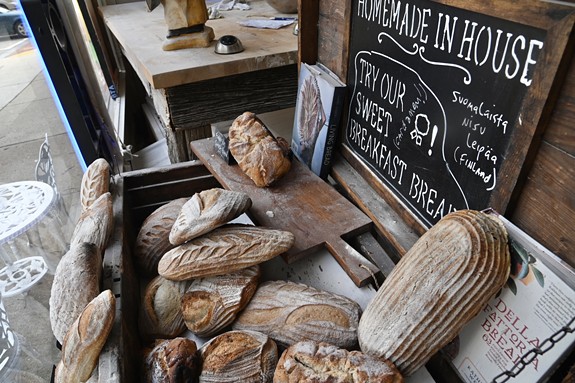 When Laine chose the name Europa Crust, the goal was to convey the crisp, chew, and quality that bread from the continent connotes. This week marks one year since the bakery’s founding. Currently, Laine’s only staff consists of his family and one full-time baker. As Europa Crust closes in on producing 1,000 loaves per week, Laine is already contemplating how his business will expand.

With spots at the farmers' markets in Bryan Park, City Stadium, and On The Square —not to mention vendor spots pending in Williamsburg, Charlottesville, and Woodbridge, the demand for increasing production is already there. Just this past weekend, Europa Crust sold 120 loaves in four hours in Bryan Park.

“Farmers’ markets are really our focus,” says Laine. “The whole goal eventually is to have a route truck that drops off around 100 to 150 loaves of bread a day. Long-term we’re looking to move production out of this facility and into something real with dock heights. We want to serve as broad of a community as we can.”

Although Europa Crust’s style of bread making has sour in the name, that doesn’t mean all of the bakery’s creations pack an acidic edge.

“Sourdough baking is a misnomer,” Laine explains. “Whereas most bakers get up at two in the morning to prepare everything they want to sell when they open their doors that day, we mix everything the day before and put them in the refrigerator just as they start to proof so it slows down the process, letting the flavors get better and stronger. It’s absolutely the best tasting bread you can eat.”

For folks who love a classic sourdough, Europa Crust has three varieties to choose from. The San Francisco sourdough is an all-white loaf made with a starter named Henry from the Golden State. The French sourdough is a take on Boulangerie Poilâne’s iconic creations which the Parisian bakery sells over 5,000 loaves of each day. The 50% whole grain also gives this loaf a deeper flavor. Lastly, the rye sourdough makes the perfect base for a pastrami or a reuben sandwich.

Europa Crust also sells a few varieties that you’d never know came from a sourdough process. The five grain’s combination of sunflower seeds, oats, rye, white flour, and flax seeds makes for a loaf that is “like a meal unto itself, it’s so hearty,” according to Laine. Preparing the rustic Italian begins with pounding down chunks of imported French sea salt and ends with bread that is good for dipping and great for pastas. If you love that loaf but want it littler, try the baguette.

One surprising success on the menu is a cardamom-braided sweet bread, a Finnish staple over coffee that Laine made as a small homage to his grandparents. Although Europa Crust will never sell cakes or croissants, Laine is working on Japanese milk bread dinner rolls to sell during the upcoming holiday season. Pain au chocolat, sliced sandwich bread, and green olive loaves are all also on the list for experimentation.

Laine credits his ability to so freely play with different flavors and forms of loaves to his background in food science: “You have to have a brain like a scientist in this business because it’s half-science and half-artistry.”

Europa Crust is located at 1321 1/2 E Main St. ste 111 in Richmond, although there is no dine-in service. For more info, visit their website.