A Passion for Smashin'

Smashed RVA looks to make a juicy splash in the local burger scene. 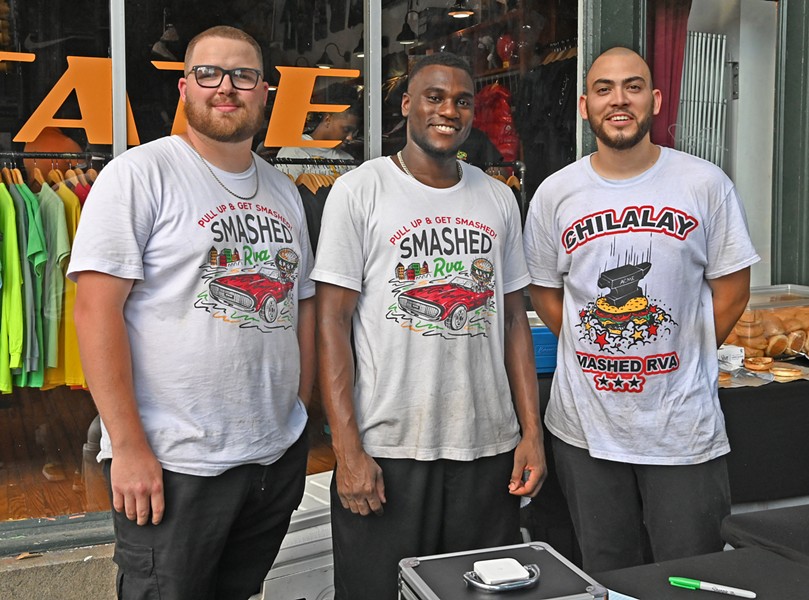 Whether you’re an omnivore, vegan, vegetarian, pescatarian, or flexitarian, chances are you love crushing a burger from time to time (sans beef for some). This sentiment is something Michael Marshall Jr., owner of Smashed RVA burger pop-up, thrives on.

Before Marshall became a burger-smashing fiend in the streets, he attended school to master the culinary eats. He went to a high school in Caroline County that was rebuilding its culinary arts program, so he decided to join. “That’s where I kinda started loving food,” he says.

“I didn’t want to go to school, but I wanted to try to go to school,” Marshall says. “Then I learned in the industry you can learn and make money, so I was like 'Oh, I’ll do that.'” With that thought, Marshall dropped out to pursue his career more directly.

After working in restaurants throughout high school and his brief stint in college, Marshall began his more serious pursuit as a kitchen manager at the Iron Horse in Ashland. His schedule proved stressful until moving over to the Caboose. Then Marshall left a brief time later, wanting something more high-pressure. That's when he worked at Lemaire, the acclaimed restaurant inside the Jefferson Hotel, which put him back into his high-stress comfort zone. Marshall thoroughly enjoys the chaos of a busy kitchen, specifically when “everything around me is on fire, but I’m just gonna keep moving. I love it.”

During his time at Lemaire, Marshall was furloughed for eight or nine months due to the pandemic. Amidst the uncertainty, Marshall started the Smashed pop-up, which began slowly, starting as a once-a-week gig. As time progressed, he gradually escalated pop-up appearances while cutting back hours spent at Lemaire. Marshall recently went all-in at Smashed, but notes his final day spent at Lemaire was “a bittersweet moment.”

As for the decision to specialize in the smash-burger style [which as it sounds, smashes the ground beef into a thin patty when it hits the grill for more flavor], Marshall notes: “Asking for a temperature for ground beef is just a weird thing to me… Smashed burgers will always be the superior burger in my opinion.” Don’t expect any pink burgers coming off these flat tops.

The idea for the burger pop-up was somewhat inspired by a high school project Marshall had to complete where students planned a makeshift restaurant. He went with burgers and milkshakes, of course. “Probably because it was the easiest thing to do…but I always knew I wanted to do burgers,” he adds.

Marshall keeps four burgers on the menu year-round with a rotating special or two that varies week to week. Out of the four mainstay menu items, Marshall very much recommends first timers “go OG or Chopped Cheese. If you’re gonna go OG, you gotta go double OG.” The OG Smash features Seven Hills beef, American cheese, onions, Smash Sauce. As for doubling down on the patties, Marshall says, “when in Rome, right?”

Their signature Smash sauce is a play on a sauce by Sean Brock, founding chef of Husk restaurant. This version features more mustard and more relish. Marshall notes, “I kind of love mustard on beef” and he didn’t realize how much he loved mustard until they started making Smashed Sauce. Given the success of this pop-up, customers seem to agree.

Marshall’s long-term goal for Smashed is a brick and mortar, but not just your average burger joint. Due to the abundance of burger spots in Richmond, they want to set themselves apart. “We don’t want to do just a normal burger shop…we want to do something a little different. Almost like a bodega-style Five Guys.” A convenience store serving burgers and chopped cheese? I think we’ve transported to NYC in a hurry.

In the meantime, Marshall would like to work more weeknights, specifically Monday nights to feed his fellow industry workers. Given these sentiments and the multitude of collaborations Smashed RVA has participated in with other local business owners – most notably (in Marshall’s opinion) the McSmashed collab with 1115 Mobile Kitchen and Jiji Frozen Custard – Marshall is a huge advocate for the RVA food community.

Check out Smashed RVA on Instagram (@SmashedRVA) to find out where they will be smashing next.