In 2019, when Kendall Appich was considering leaving her corporate job in IT and cybersecurity to become an entrepreneur, it was the question, “What would make you truly happy?” that provided clarity.

“I’d be happy slinging ice cream,” she thought when it came time to make moves.

With Richmond’s lack of frozen custard options, the decision to devote herself to selling frozen desserts became a “no brainer,” she says.

Jijivisha is a Hindi term commonly used in yoga and loosely translated as “living life to the fullest.” It’s also the name that Appich chose for the business she now runs with her husband: Jiji’s Frozen Custard food truck. While “Jiji” is not meant to be an abbreviated version of Jijivisha, she says, it is a compelling reminder of the spirit the owners strive to embody. The name also serves as a remembrance of Kiwi the dog, a late furry friend of the business owners who can be spotted on Jiji’s colorful two-truck fleet.

Frozen custard was one of Appich’s favorite memories from her childhood in Northern Virginia. A former regular at Carl’s Frozen Yogurt in Fredericksburg, she missed this frosty delight dearly upon relocating to Richmond with her husband, Chase. While he joined Appich at Jiji’s part-time at first, eventually he quit his day job in construction in August 2020 to go all-in with his wife in pursuit of custard glory. 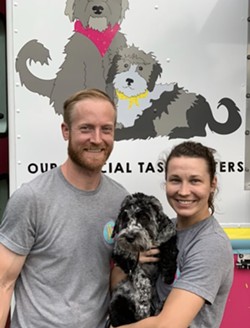 While forging their path towards entrepreneurship, the couple had several mentors who offered valuable advice along the way. Most notably was a frozen custard veteran who served about 30 years at Culver’s, one of the nation’s largest frozen custard establishments. This connection advised them on what equipment to utilize, among other recommendations, and gave an extensive tour of Wisconsin’s frozen custard scene during a research trip in April 2019.

The mentor also said there was no way frozen custard would work on a food truck -- not that the Appichs listened.

So why the food truck? Ultimately, it was the “quickest to market” option, according to Kendall. Food trucks are more affordable and less risky than a brick and mortar. Two and a half years since Jiji’s first pop-up, the food truck option has proven its merit.

One should anticipate an excited crowd at any of Jiji’s pop-up events. Although the truck is well-known for its “pundaes” – specialty sundaes with names that put dad jokes to shame – a single vanilla with rainbow sprinkles is the most popular order amongst kids. There is a multitude of toppings for personal creativity, but sometimes simplicity rules.

As for the adults, the pundaes “keep them coming back,” says Kendall, adding they have a decent rotation of regulars who show up each time a new pundae is released. Those folks are onto something.

Pundae offerings change regularly to spotlight seasons and holidays. Of all the pundaes they have created, “Strawberry Fields Forever” is Kendall’s favorite. An ode to her childhood favorite Strawberry Shortcake a La Mode from Silver Diner, this concoction features vanilla custard and fresh strawberries served over a slice of Ukrops’ pound cake, topped with a strawberry shortcake cookie crumble. Pro tip: Kendall insists you add chocolate fudge. Did someone say heaven in a bowl? Look forward to this showstopper reappearing during strawberry season.

As for the future of Jiji’s, keep an eye out for their dairy-free vegan option rolling out sometime later this year. They also hope to begin packaging their goods to sell directly to consumers. Movie nights in = complete.

With two trucks already in circulation, the hope for Jiji’s expansion is ultimately a brick and mortar. However, the owners are steadfast about it being “the right opportunity at the right time.” The ability to serve through a drive-thru window is one of those must-haves. As with the quality of their custards, they want everything to be perfect.