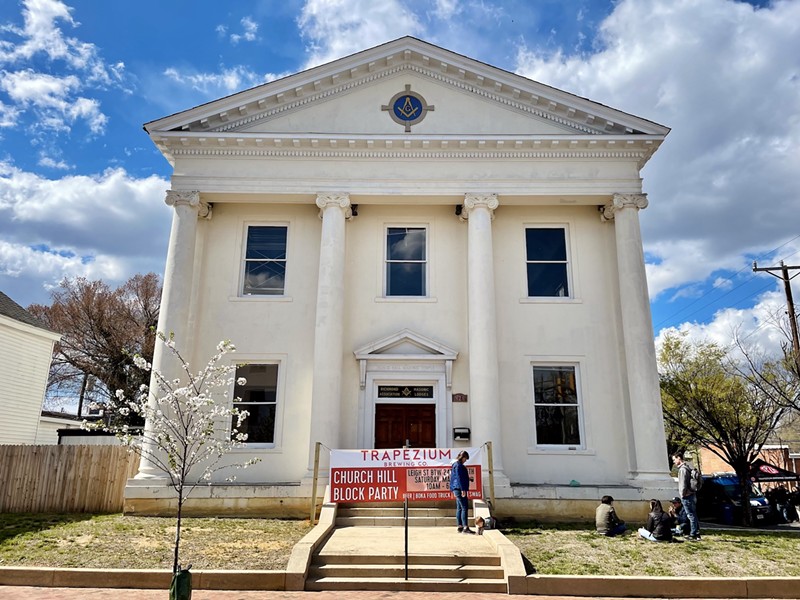 Wyatt Gordon The entrance to Trapezium Brewing's upcoming location, 93 by Trapezium, inside the former Richmond Association of Masonic Lodges at 520 N. 25th St. in Church Hill.

Hundreds of people turned out to try a pint from what will become the neighborhood’s first brewery, which the owners have dubbed '93 by Trapezium,' a promising sign that success may be ahead for the satellite taproom’s official opening later this year.

“It’s been a while since we first announced the new location in Church Hill, so we were super nervous that few folks would come,” says Emily Sanfratella, one of Trapezium’s three owners along with Dave McCormack and James Frazer. But after selling over 1,000 pours of beer in just eight hours, her fears felt unfounded. The block party was such a success that Sanfratella is now considering another pop-up or two before the location’s launch in late summer or early autumn.

With the leaky roof repaired and other structural work complete, all that remains to be done is the interior design. “Everything is just waiting to be filled out with furniture, bars, and beer,” according to Sanfratella.

The Trapezium team is used to working with wacky old buildings like the former location of the Richmond Association of Masonic Lodges in Church Hill. The brewery's original location in Old Towne Petersburg was once an ice house that manufactured giant ice blocks to be shipped across the South. The site of Camp Trapezium in Amherst, the brewery’s second satellite taproom, functioned as a historic flour mill before it fell into disrepair.

“All of our locations share something in common in that they are all adaptive reuse; the buildings have had previous lives,” explains Sanfratella, adding that the new Church Hill location is unique. “It’s not just a rectangular building with some metal tanks in it. We want to incorporate some of the mystery of the masonic lodge into our branding of the location,” she says. 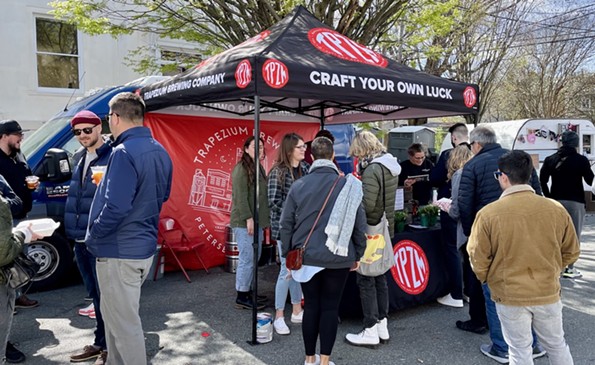 Although the coming location is large, it isn’t big enough for the giant steel drums typically used to brew beer that owners install to comply with Virginia’s arcane alcohol rules, which require brewers to produce at least 20% of the beer sold at any given taproom on-site. Due to space constraints, the Trapezium team decided to get creative.

To adhere to the letter of the law, the Church Hill location will lean into on-site blending and barrel-aging of their beers — some varieties for months and years to pull out new flavors. All of Trapezium’s most popular varieties will be available in the taproom, but some of the aged and blended beers will be unique to 93 and not available at other locations or for distribution.

To prepare for launch, Trapezium has been barreling and aging beers to have them ready for the grand opening. Among the flavors Trapezium is planning to debut later this year are: a strawberry mixed culture beer aged in gin and zinfandel barrels, a raspberry and Harrison apple cider and Brett beer blend, and a cherry lambic (Kriek) that may remind drinkers of their favorite Belgian beers.

Many of the fruits used in such experimental new offerings come directly from Camp Trapezium. “We’re really trying to leverage our land in Amherst by cultivating fruit there that goes into our beers, including cantaloupes, peaches, strawberries and blackberries,” Sanfratella explains. “Our former flour mill has a farm on-site where we grow lots of the crops that go into our food offerings as well, including herbs, tomatoes, and pizza toppings.”

Fans of the pizza at Trapezium’s Petersburg location will have to wait to see what food the Church Hill location has in the works. Until the details are finalized, Sanfratella says customers should expect a fun, full service menu.

Folks looking to try Trapezium’s latest beers before the Church Hill opening can visit the Amherst or Petersburg locations or check their local craft beer spot. From the blueberry lemon gose to their peach blonde ale and the cashmere sweater IPA, the team behind Trapezium isn’t afraid to get creative in pursuit of the perfect pint.

“We just follow where our curiosities take us, which is usually in a pretty weird direction. But with this location we’re leaning into it,” says Sanfratella. “We’re so excited to slowly be getting folded into the mix of the community and can’t wait to open later this summer or fall.”