Where Everyone Knows Your Name

As new restaurants have learned to adapt to the pandemic, so too have their customers.

“One thing I’ve been very grateful for when we first started this is our guests have been fantastic,” says Dan Lee, co-owner of Brookland Park’s newest coffee shop, Smoky Mug.

“There have been the naysayers who say, ‘Oh how will you operate a restaurant?’ But guests have been self distancing – we’ve never had to come and tell them to space out,” Lee says.

Lee and the three other Smoky Mug owners – Marcella Lee, Ryan Maynes and Bethany Ann Dunbar – jokingly admit they’d love to have their quaint space serve as the next Brookland Park Cheers.

And they’re off to a rip-roaring start, it seems.

Smoky Mug officially opened in the old Black Hand coffee space mid-November. When we chat two weeks later, a smattering of patrons enters and leave with their orders of iced oat milk lattes and steaming hot Americanos, all cheerfully bidding adieu on their way out.

A semblance of regulars in the time of coronavirus is no small feat, and the owners say they hope to continue to build up a steady customer base of familiar faces.

“It’s been great to be able to support our community by being in it,” Marcella says. “But we also try to employ people who live close by. We want to hire more people as we start to grow as well, and give people job opportunities who maybe don’t have access to a car.”

In addition to using a coffee blend roasted specially by a local, third-party roaster, the shop also stocks products from other small businesses like Dayum Jam and Chewy’s Bagels. It also retails Rasta Honey Man jars and has featured the ingredient in a recent seasonal beverage, the Saigon chai. “It’s milk and honey, it’s biblical!” Dan says.

While four owners working closely together to open a new dining concept during a pandemic could spell disaster, the four partners seem to operate totally in sync.

Their paths first crossed personally – they’re all Brookland Park neighbors –before evolving into professional relationships. They’re not veteran industry folks except for Marcella, who has worked in restaurants since she was 14.

This isn’t to say they don’t bring ample experience to the entrepreneurial table.

Dan is the vice president of neighboring business VII apparel, formerly Savage apparel, and says he inherited his small business know-how and volition from his immigrant parents.

Marcella, who holds a personal training and nutrition certification, retired from the world of hair last December when she sold her hair salon.

Dunbar spent a decade as a radiologist tech before moving into the world of medical sales. She’s also the Smoky Mug’s self-appointed interior designer, responsible for brightening up the minuscule square footage with bright white tile and deep teal walls.

And then there’s Maynes, the man who will soon light up the Smoky Mug’s very own smoker. That’s right, while Smoky Mug is currently operating only as a coffee and breakfast-lunch spot, in 2021 the Brookland Park shop will become a deliciously quirky hybrid. 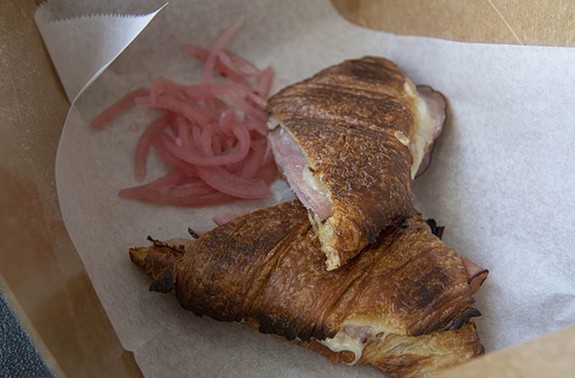 Before serving as a Marine, contractor, and eventually, a car salesman, Maynes was just a boy on a livestock farm in New Mexico. It’s safe to say he knows a thing or two about cows, which has informed his insight into many a barbecue lover’s favorite subject: brisket.

One day last spring, neighbor Dan decided to follow the smoke trail from his house to Maynes’ yard. “I was cooking brisket and Dan said ‘Man, you ever thought about selling that?’” Maynes says, who had in fact been encouraged by fiancee Dunbar many times to launch a food truck.

When Black Hand vacated, Dan told Maynes this was the time to strike – “He said, that would be the perfect place for a barbecue joint,” Maynes remembers.

And so it was.

Maynes’ barbecue menu is still under wraps, but he shared a few teasers. The barbecue will be served meat market, sell-out style – think ZZQ – with traditional meats and sides. “Brisket will be the star of the show,” Maynes says. But it will also have Carolina pulled pork and half chickens, with plans for sausages, too. 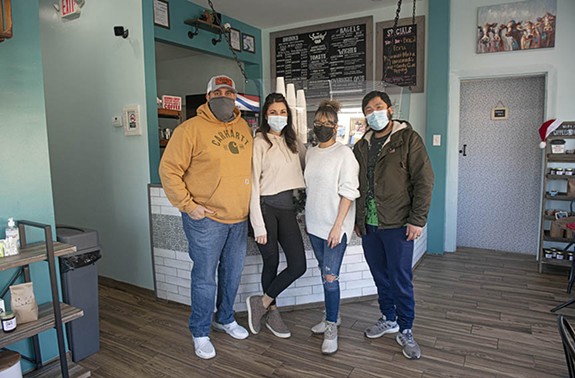 Maynes will honor his New Mexico roots with Southwestern style barbecue tacos, plus some other “Southwestern plays on barbecue” that he isn’t ready to give away quite yet. The pitmaster will also be utilizing the unmistakable flavor of the green Hatch chile, which is only harvested a few months out of the year.

In addition to professional advice from Chris Fultz and his crew members over at ZZQ, the Smoky Mug team says it’s been able to tap into the collective brainpower of some of the city’s most veteran managers and owners, getting advice on everything from how to visualize the space to how to maximize kitchen flow.

“It’s funny, because we never opened up anything before, we didn’t know any better,” Maynes says of opening a new restaurant during the pandemic. “It’s probably better for us that we didn’t know.”

They, like many other recently opened spots, automatically pandemic-proofed their business model, creating an inviting patio area and letting guests preview the menu with a QR code.

“I think it’s eased up the anxiety of coming into a new space [as a customer] and looking at a new menu, the QR code lets people check it out in advance,” Marcella says.

“And also they’re talking to people in line, recognizing people from the community. That makes people feel at ease. By the time they get to the register they’re feeling good, they know what they want and maybe they’ve made a new friend.”