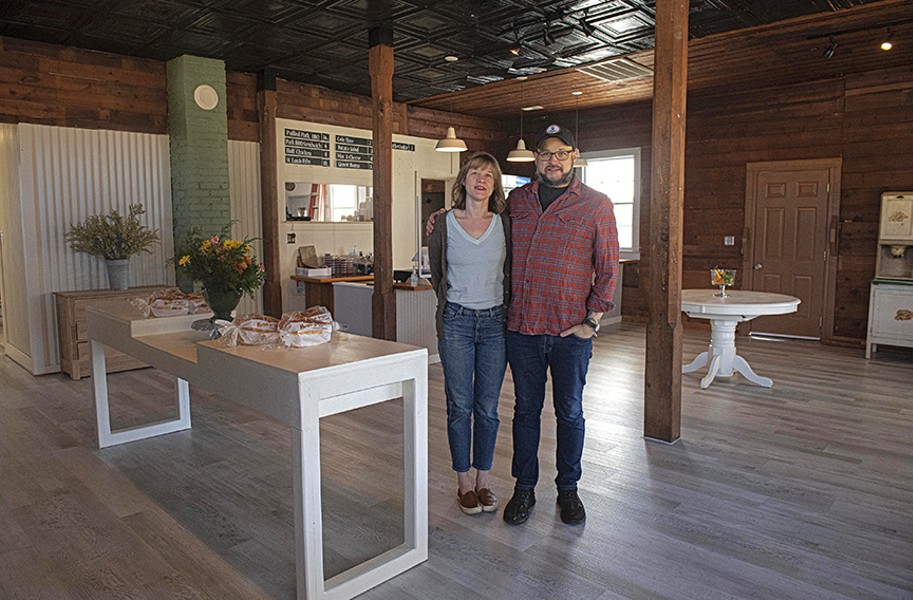 At 2030 Broad Street Road in Maidens, the Feed Store looks like any country market situated on a two-lane highway – low-slung, white shingles, a smokehouse sign beckoning. You can almost smell the wood stacked high, the exhaust curling up behind the much-loved F-150 parked out front.

Sara Kerfoot grew up down the road from the charming stand-alone building. “Visiting my parents we’d drive by the store, which was usually closed when we were going by,” recalls Kerfoot. “It’s such a cute, 100-year-old general store it seemed like a dream spot. One day I saw it was for rent.”

Kerfoot and husband Adam Hall, both former Saison employees, inquired about the status of the store and learned it was available.

“We’ve had to think about what the business looks like right now, versus what we want it to look like a couple years from now,” says Kerfoot about opening a new restaurant during a global pandemic.

Right now, the Feed Store looks like to-go only with a “pretty standard” menu of wood-fired barbecue including ribs, pulled pork and chicken.

Sides are also traditional, with rotating options like stewed green beans, mac and cheese, coleslaw and potato salad. “When you mention barbecue everyone has an opinion,” says Hall, noting he chose Virginia and North Carolina styles because, “That’s what I grew up on.”

The Feed Store also has a retail arm, with house-made soda and beer and wine bottles available for grab and go. The couple says customers can picnic on the almost 2-acre property, or tailgate if they so choose.

Since opening in mid-November, Kerfoot says clientele has been mixed, with mostly Maidens-adjacent locals popping in during the week and Richmonders making the 30-minute trip on the weekends. Regardless of where they hail from, though, everyone has been quick to “walk in and introduce themselves,” Kerfoot says. Including a friendly older neighbor who casually mentioned his family had been in the area for “200 years.”

Going from working long hours as general manager and chef at a bustling downtown restaurant to manning the fires of a serene, bucolic barbecue joint sounds like a quality of life upgrade. But the couple says they still have their challenges.

“We’ve gone from running a rat race to slowing down and paying attention,” Kerfoot says. “But you realize one minor thing can screw up the whole process – 10-12 hours is a long time to cook something, and then it disappears in 30 seconds,” she laughs.

“I always thought of Saison as a labor of love, with made-from-scratch ingredients, there was a lot of work put in in the kitchen, but this is such a labor-intensive process.”

The Feed Store at 2030 Broad Street Road in Maidens is open for takeout only 11 a.m.-7 p.m. Wednesdays-Saturdays and noon-3 p.m. Sundays.

Located in the former Brookland Park Black Hand Coffee shop at 15 E. Brookland Park Blvd., Smoky Mug brings the beans back to the neighborhood. It’s open daily for breakfast and lunch with outdoor seating. Look for a full barbecue menu to launch early next year.