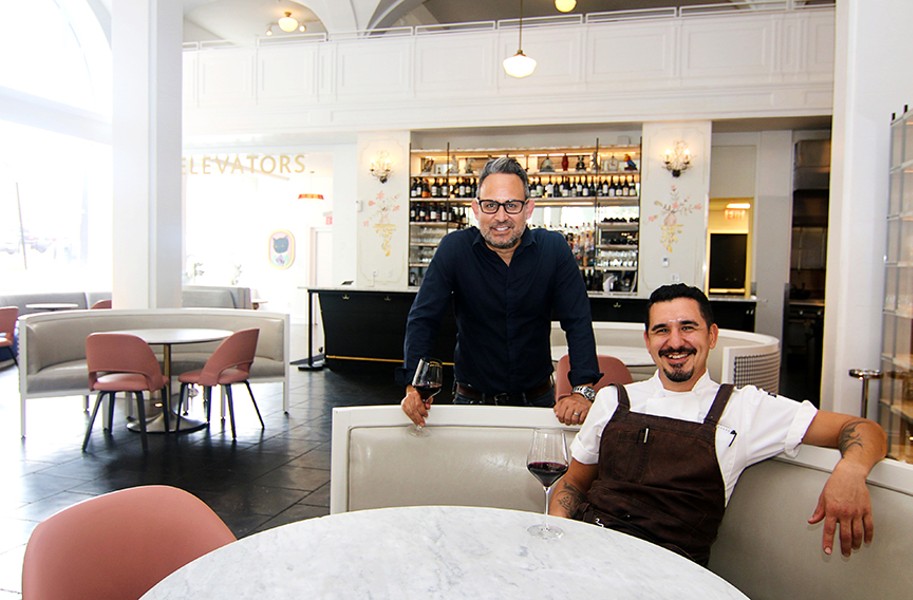 If the mod, 2,800-square-foot Rooftop Bar is the go-to jewel of Quirk Hotel, the high-ceilinged, ground floor Lobby Bar is slated to become its jazzy heart.

“The funny thing is if we hadn't had the pandemic, I’m not sure if the re-concepting would’ve come around,” says Quirk’s food and beverage director, Morgan Slade. “But it was always an idea that was in the back of everyone's head.”

“Stylistically, the food was very composed – it was very pretty,” Slade says. “It kind of pushed us into being a special occasion restaurant.”

In a 2016 review of Maple & Pine, Style food critic Matthew Freeman concluded: “Whether you’re here for drinks and some sliders off the bar menu or an extended family brunch, this new Richmond sophistication is sure to find a continuing fan base among out-of-towners and locals alike.”

“We kind of flipped it around a bit,” says Lobby Bar executive chef Felipe Bolivar.

Instead of adhering to the app, entree and dessert model – “not that there’s anything wrong with that,” Bolivar says — the Lobby Bar team pursued a more malleable mode of service with a small-plates-centered menu.

That’s not to say that the revamped signature restaurant doesn’t exude the sophistication of its predecessor. It does. Order a Q75 cocktail made with gin, creme de mure, thyme and sparkling wine and try to not morph into a Bond girl as you raise your shiny flute.

But a two-hour fine-dining time commitment is a thing of the pre-pandemic past.

“When you look at the pandemic scenario you ask ‘What is everyone's comfort level?’” Slade says. “And, ‘What is their time commitment going to be? Are they willing to come sit inside for two hours or do they want drinks and bites before they see where the evening goes?’”

For Bolivar – his résumé includes stints at ThallyDC, Iron Gate D.C. and Richmond’s the Roosevelt — cheffing at the Lobby Bar is all about letting the customer dictate their own experience. “It’s the hospitality industry, it makes sense to go that avenue rather than having us decide,” he says.

That customer-driven experience means peace of mind for all eaters, vegans and carnivores alike. The same thought and execution go into each dish, whether you’re hankering for the lamb neck fritters served atop stewed garbanzo beans with spicy chili jus or the vegan-friendly, house-made Moroccan couscous with autumn vegetables.

And yes, Bolivar says, the couscous is gluten-free. “You would never know! It took a lot of effort to make it work, but we’re thinking about everyone’s needs.” The chef himself has a peanut allergy and knows all too-well the woes of dietary restrictions. “Vegan dishes, gluten-free dishes — they’re not an afterthought,” Bolivar says.

Another boon of the Lobby Bar’s varied menu is that it works for the amorphous dining space. Situated – literally – in the lobby, the restaurant’s millennial pink curved booths and long marble bar are part and parcel of the hotel itself.

“It’s a unique space,” Slade says. “Everything is happening at the same time. Before there were these superficial borders – it didn't make sense to have designated spaces in a clearly open area.”

Now, you can order several small plates and a bottle of Nebbiolo for a sit-down dinner or grab an absinthe-infused Modern Day Hemingway to sip in the corner while you read “This Side of Paradise.”

“We want our guests to relax,” Slade says. “There is a lot of stress going on, so we think ‘How do we create a real airy, happy place where people can come and do their own thing?’”

The Lobby Bar’s stress-free environment includes socially distanced tables, disposable and digital menus and sanitizing between seatings. Diners can choose to enjoy their meals inside, or in the spacious outdoor dining area, adorned with twinkly lights, lush, potted plants and now, heaters.

Bolivar notes that the team eased into service with weekend brunch in August. It then tacked on Thursday-Saturday dinner, and as of Monday Oct. 19, the Lobby Bar is up and running seven days a week.

“We basically deconstructed the whole operation and put it back together,” Slade says.

Don’t worry, Bolivar assures us he and sous chef Anna Schmitt of Iron Gate and Seasonal Pantry will also be whipping up hazelnut-chocolate pancakes topped with whipped cream in case you need to soak up a few too many Q75s from the night before.

Check out the Lobby Bar menus and book your table at destinationhotels.com/quirk-hotel/dining-and-drinks/menus.