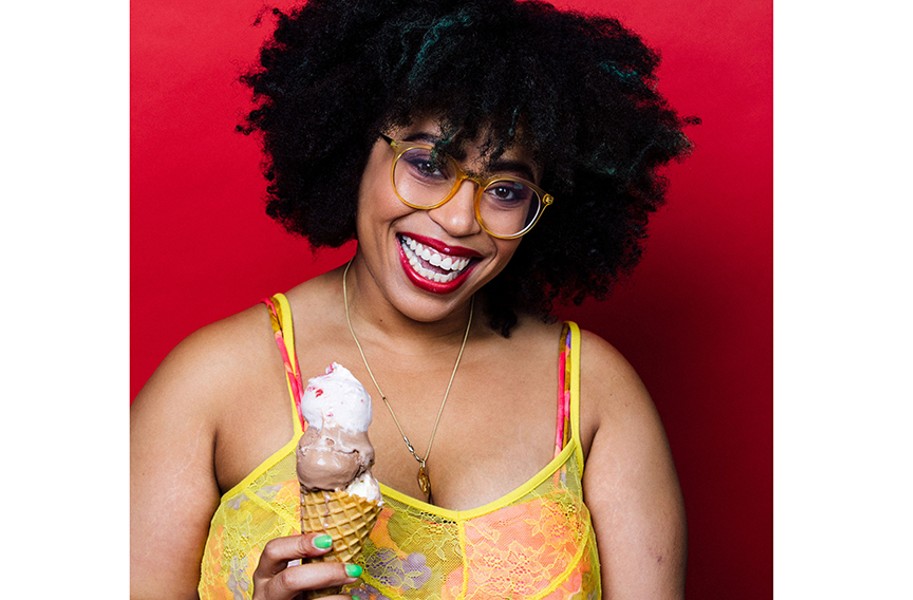 After graduating from Virginia Commonwealth University in 2010 with a degree in business marketing, Rabia Kamara began her ice cream odyssey while studying culinary arts at L’Academie de Cuisine in 2011. When she started her career as a pastry chef in 2013, it afforded her the chance to make ice cream on a more regular basis.

It was then that she fell more in love with the whole process.

“One night during service I peeked out at table and saw two young sisters get into a tiff about some vanilla ice cream their parents ordered,” she recalls. “It reminded me of how many memories I had around frozen treats with my own sisters and in my life altogether, and I knew then that I wanted to continue making ice cream for as long as I could.”

But she wanted to do it through her own business.

After moving to Washington, Kamara turned out Ruby Scoops ice cream that was preservative-, additive- and hormone-free, made with local dairy, eggs and produce. With a winning formula, she began selling her ice cream at farmers markets, grocery stores and festivals like the National Cannabis Fest, Hardywood Heart & Soul Brewfest and the Soul Vegan Block Party.

Although she’d scouted possible Washington locations for a shop. Kamara always had a special place in her heart for Richmond. Given Washington lease prices, returning seemed like her best chance of growing the business. It became even clearer last summer when she met Emmett Wright, a chef at Helen’s, at a panel discussion. He had three things going for him: He lived here, he loved ice cream and creating flavors just as she did, and he was looking to get into the business. Kamara asked him to join as her partner in Ruby Scoops.

Next they needed a location. With the help of an agent, she scoured places all over Richmond for months. The building at 300 W. Brookland Park Blvd. was not only the last place they saw, but the only one her mind kept returning to.

“A big part of why I do this is to create memories for families and provide them with a quality treat they can enjoy during special time together,” she explains. When she’d attended VCU, she babysat for a family in North Side and fell in love with its neighborhood feel. “I see the change happening and what’s to come and we love that we can grow with other Brookland Park businesses being there.”

With plans to open in April, the goal is to serve 12 to 16 flavors, half vegetarian and half vegan. In addition to classic vanilla and chocolate, there’ll be mango sorbet and dulce de leche ice cream, both of which are already best sellers. But the focus will be on more seasonal, fun flavors such as strawberry and sweet red bean in spring, pistachio sage and apple cobbler in winter, and sweet corn and Old Bay caramel in summer.

The first floor will house the kitchen area with a window to watch the magic happening and a counter where customers can sit and enjoy coffee, tea, milkshakes and house-made sodas. The second floor will be all seating to encourage people to sit and linger rather than feel rushed to grab a scoop and head out. Besides the ice cream and beverages, Ruby Scoops will serve cookies, made-to-order ice cream sandwiches, desserts and baked goods and flex its savory food muscles with sandwiches, salads and small plates.

As for the name Ruby Scoops, Kamara says it comes from the difficulty people have always had with her name. When she was younger, rather than correct them, she’d say her name was Ruby, which quickly became a nickname. She was committed to having “scoops” in the name so it would be obvious what the business sold.

“I’d try some other ideas in my head, but I just really liked the ring Ruby Scoops had to it,” she says. “Similar to how it went with choosing the storefront location, I just couldn’t get it out of my head.”