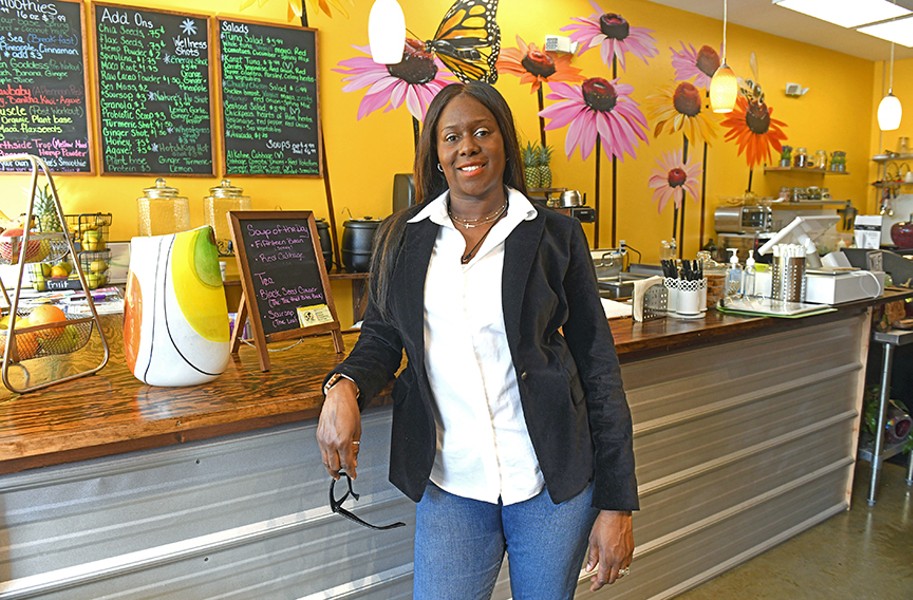 Brookland Park is not only an up-and-coming neighborhood, it’s also a food desert.

So when Brandi Battle-Brown decided to open a juice bar, it only made sense to do it in a neighborhood with increasing foot traffic and attention from the city.

Need hydration? Try the Ebony Island Hangover, a smoothie of apple, carrot, orange, beets and ginger. To get your mellow on, check out the Northside Trop, made with mango, pineapple and hemp powder. Nature’s Flu Shot — lemon, ginger, garlic and cayenne pepper — beats a needle any day.

Ms. Bee’s Juice Bar opened Jan. 25 and has already started to attract a steady stream of neighborhood regulars, like the two dads who are off every Friday and meet for lunch, then wile away the afternoon talking once they eat. Overall, Battle-Brown has seen a mixture of healthy eaters and those curious to learn more about the benefits of juicing. She keeps a nutritional facts book on the counter so that customers can learn more about the various add-ins — things such as chia and flax seeds, granola and probiotics — they can choose to customize their organic juices, wellness shots and smoothies. House-made soups and salads, including vegan seafood and tuna salad, round out the menu.

Because Battle-Brown has been a real-estate agent for years, she took note of the direction Brookland Park is headed.

“I wanted to be in an urban community and teach people how to choose a better way of eating and what the health benefits from it are,” she says of learning those lessons herself when she began juicing in 2018. “A lot of things are negotiable, but not your health. You only get one body.”

Entirely designed by its owner, the space is welcoming and light-filled with one exposed brick wall and the others a sunny yellow, with a mural done by Jason Ford of echinacea flowers and pollinators. A long counter holds baskets and bins of fruits like pineapple, oranges, bananas, kiwis, lemons and apples, ready to be juiced. Tables line the wall across from the counter, but it’s the two tables that sit in the front windows that quickly became customer favorites.

“On Saturdays, people will call to see if those tables are free because they want to come in and spend time in them,” she says.

Seated at one of them and looking out to the street reveals a procession of orange cones and street work going on. The city is building bump-out wells along Brookland Park Boulevard to slow traffic and make the area more hospitable to pedestrians. Given the uptick in interest in the neighborhood, Battle-Brown plans to plant a small garden in the well in front of her shop.

“In five years, this will be a baby Carytown,” she says with the assurance of a long-time real estate agent.

Meanwhile, customers continue to find the sunny juice bar and embrace its lessons. Laveta Hurt grew up in the neighborhood and when she comes to visit her parents, makes a point to stop at Ms. Bee’s for a smoothie.

“Even if it didn’t taste good, I know my body’s getting good things,” she says, sipping an Ebony Island Hangover. “But it does taste delicious!”