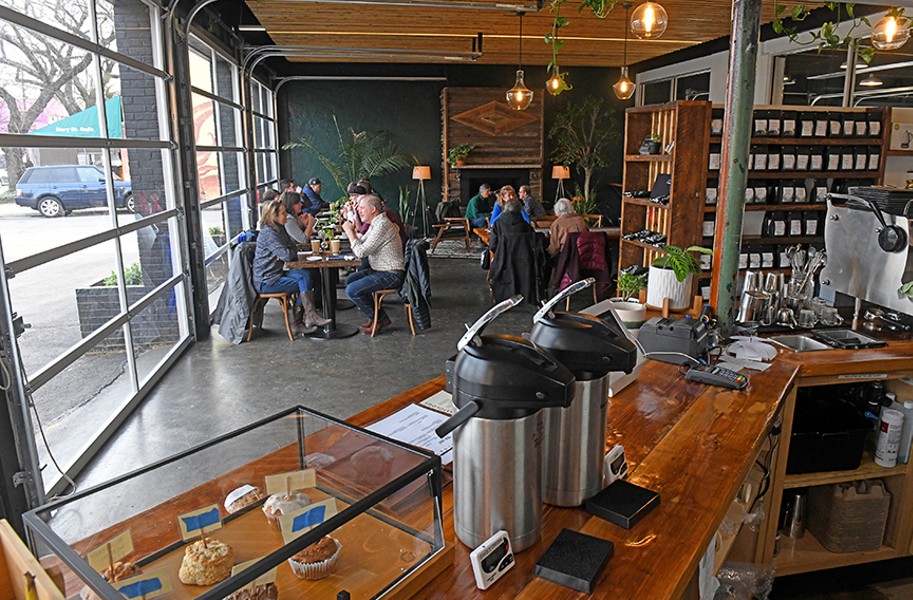 Owner Dan Allen’s new reality is that he’s not in Midlothian anymore. Roastology began life in suburban Richmond in 2013, shuttering in November after leasing the new space. He used the ensuing two months to brainstorm with his staff about exactly how the business should run.

The new cafe at 2701 W. Cary St. sits a block from Arthur Ashe Boulevard in a building that most recently was a woodworking shop but was originally an MG dealership and gas station. Step inside the refurbished building and the first impression is of the gas station’s marquee, which now curves over top of the coffee bar.

“We wanted to be part of the city’s robust coffee culture,” Allen says from his 5,000-square-foot space where he and his staff order, process, roast and package their own coffee beans in addition to running a coffee bar and cafe. Like bees to honey, neighborhood residents have already begun the process of becoming regulars.

There’s a lot to like about the open and inviting space. A long counter faces two large windows which look into the roasting room, an intentional design choice.

“The glass gives separation for processing but allows customers to see what we’re doing,” explains head roaster Mary Doerr, who started with Roastology in 2014 but has worked in the coffee business for over a decade. Even though the two coffee roasting machines in back can get hotter than 500 degrees, customers don’t hesitate to knock on the glass to ask for a tour, which Doerr is happy to give.

In the main room, customers fill nearly every available seat, including the two-top tables crafted by Allen and his wife Elise, which have been finished with resin-covered coffee beans. Near the back, others lounge on leather couches and chairs angled toward the fireplace, which is faced with wood salvaged from the floor joints of a Grace Street house. That same reclaimed wood has been used for counter tops, the retail shelving that holds bags of beans and T-shirts and the community table.

“I originally thought the community table would be for large groups that came in,” Allen says. “But every time I look out there, it’s a bunch of smaller groups all sitting together. A real community table.”

Acknowledging that the city’s food culture is as robust as its coffee culture, Allen had to double his staff to 16 for the new endeavor, as well as expand the cafe’s food program. In Midlothian, Roastology offered one breakfast sandwich and three lunch sandwiches, but the new menu boasts five breakfast offerings, small plates, salads and 10 sandwiches, with plenty of vegan and gluten-free options. Pickles and spreads such as fig jam and apricot chutney are made in-house.
Already, the staff is recognizing differences between a Midlothian crowd and their new city clientele. “Here, people are a lot more willing to try new things,” says Julia Thomas, who began as a barista and now assists with roasting and packaging. “And a lot more people go for lighter, naturally processed coffees.”

One of the most appealing aspects of the renovated building is the replacement of the old wooden garage doors with glass garage doors that allow in light. Despite opening in January, the cafe was so crowded on its first Saturday that the staff rolled one of the garage doors partway up to let out body heat and allow air in. More than a few customers took that as an invitation to walk in under the open doors.

“We were a destination before because we weren’t in a residential neighborhood,” Allen says. “Now people stop in because they walk by and see us and they linger. They’re happy to have a coffee shop so near so we want to be good neighbors.”