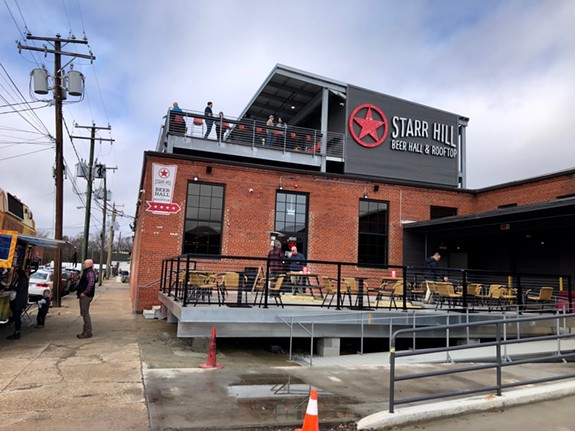 The Jamestown settlers did it, George Washington and Thomas Jefferson did it, and Starr Hill has been doing it since 1999. As of today, Starr Hill Brewery is also doing it in, where else? Scott’s Addition.

Located at 3406 West Leigh St., the 8,500 square feet Starr Hill Beer Hall and Rooftop is open every day of the week and will serve beer from its new pilot system in addition to classics from the founding Crozet production facility. Their opening blowout, with three bands and two food trucks, was held Saturday, Dec. 14 from noon to 9 p.m.

The interior, with its soaring ceiling and abundant seating, boasts a mid-century modern-styled lounge area, high-top tables, community tables and a colorful mural depicting the James River and the Richmond skyline, executed by Kyle Harrell, the artist known as Humble. The bathrooms are wallpapered with the enlarged art of a previous beer label, minus the wording.

For outdoor lovers, there’s also a patio and a generously-sized rooftop bar with sweeping views of not only Scott’s Addition, but the Diamond and downtown. Permanent heaters have been installed on the rooftop and a drop-down curtain will allow staff to create a comfortable environment for guests no matter the weather. Best of all, 24 rotating taps are available at both bars, downstairs and upstairs.

Starr Hill started out as a Charlottesville music hall in 1999 – owner Coran Capshaw managed and launched the Dave Matthews Band - so you can count on music figuring prominently in Scott’s Addition. A stage is built into the front of the taproom, with plans to feature live music several nights a week from up-and-coming Central Virginia artists. To drive that point home, the wall next to the staircase is lined with eye-catching music show posters by bands such as Phish, Trey Anastasio and Chris Stapleton, all of whom are managed by Capshaw. That focus is in Starr Hill’s DNA.

“Music is integral to our brand,” explains finance manager Josh Cromwell. “It’s the central theme of our taproom experience.”

It’s worth noting that Starr Hill is the second-oldest brewery in the commonwealth of Virginia, second only to our own Legend Brewing.

“We wanted to involve the brewing area with the taproom,” says Cromwell of putting the inner workings on display. “We wanted it to be at the forefront to answer customers’ questions and be able to explain what we do.”

A merchandise shop is situated near the bar, offerings guests a chance to take a little Starr Hill home with them in the form of t-shirts, dog collars outfitted with bottle openers, fleece vests, knit hats, brewery glasses, caps and flannel shirts. For a more quaffable souvenir, guests can have growlers and crowlers – 32 oz. cans – filled with their favorite suds. And while food trucks will be on premises regularly, a touch screen is also positioned nearby to allow guests to order food delivered directly to the taproom.

Cromwell, who grew up in Midlothian is beyond thrilled about the company’s newest location, noting with pride, “I’m really happy to be part of bringing Starr Hill beer back to my hometown.”