The history behind one of Richmond’s longest running food festivals. 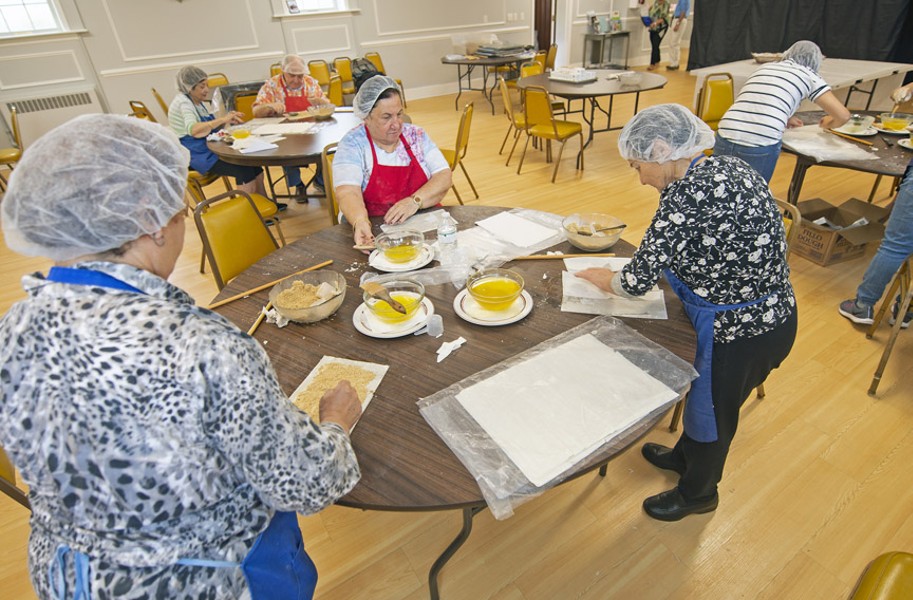 At lunchtime on a Tuesday in late August, the first floor of St. James Armenian Church is bustling. The 61st annual Armenian Food Festival is less than two weeks away, so it's preparation crunch time for the dedicated team behind the event.

In the kitchen, neat rolls of bourma, a traditional Armenian dessert resembling baklava, line jumbo baking sheets in various stages of production. One apron-and-hairnet-clad volunteer slices the rolled sweets and paints them with butter before popping the pan into the oven, while another drizzles a generous serving of simple syrup over a hot, fresh batch.

In the adjacent room, a multigenerational group of mostly women focus on the early bourma-making steps: gently folding a sheet of phyllo dough in two, painting each side with clarified butter, spreading on a mixture of walnuts, cinnamon and sugar and then, using a small wooden dowel, delicately rolling it into a long, narrow cylinder.

The Armenian Food Festival, which runs Sept. 6-8, started out as a humble bake sale to fund the building of the church. It has since grown into a multiday outdoor event that includes musical performances, a gift shop and an expansive, ever-growing menu of Armenian entrees, sides, desserts, beer and wine.

"In addition to it being a major fundraiser for the church, it's also bringing Armenian culture and history to Richmond and making sure people know about us, everything about us," says Leiza Bouroujian, a committee chairwoman and festival organizer. "We wanted to make sure to give back to the community by exposing them to our wonderful cuisine that we're very proud of."

Lilly Bouroujian Thomas, Leiza's sister-in-law and a longtime festival organizer whose mother taught her to cook, says the recipes came from the church's original elders, and had already been passed down for generations before the festival started. She and the cadre of cooks, spanning in age from grandparents to adolescents, are protective and loyal to the recipes, while remaining open to adaptations, like folding the phyllo sheets in half during the bourma-making process to prevent rips.

And the preparation will continue through the final day of the festival. Once the team finishes the desserts — roughly 2,500 of each variety — they'll move on to other tasks, like marinating meats for kebabs. Beeshee, a fried dough with syrup, will make its debut on the menu this year, and the hye burger of ground beef and lamb has developed a devoted following. Heaping pots of pilaf, a rice dish with spices and veggies, will continuously make their way from the kitchen to the dining tents throughout the weekend, and she says they anticipate selling out by closing time on Sunday.

Bouroujian Thomas grew up in Lebanon, where her family settled after her grandmother survived the Armenian genocide of the early 1900s. When she arrived in Richmond, the concept of a food festival was foreign but exciting to her, so she was eager to get involved and help cook. In 1994, when her beloved mentor Virginia Ashjian Greene fell ill, Bouroujian Thomas took on more responsibility and became a driving force in the kitchen.

'She was so sick, she said 'Lilly, I want to give you my food festival books. I know you can do this,'" she says. "Every time I think about it, I get goose bumps. I still have her books."