The owners of Grisette hope a rotating menu and accessible prices will make the new restaurant stand out in Church Hill. 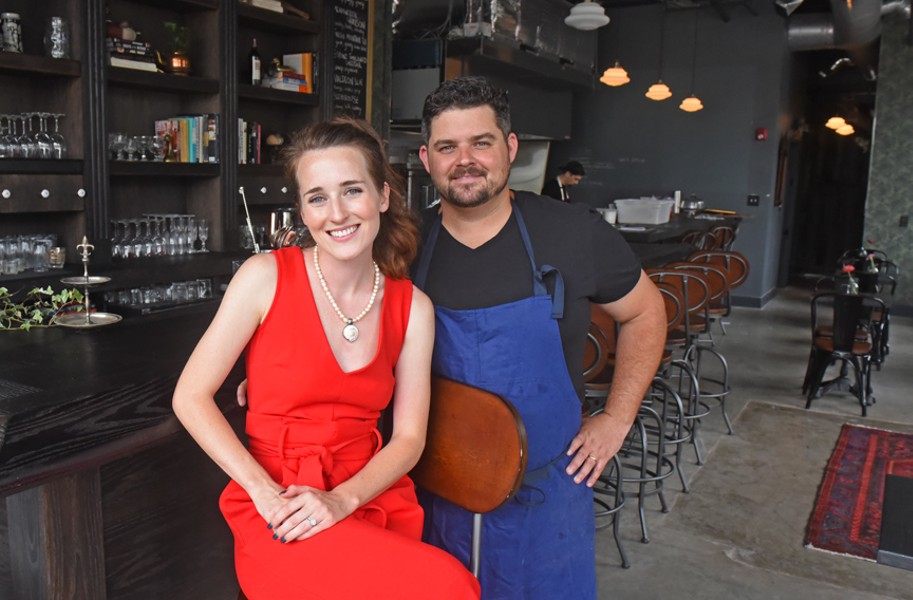 When chef Donnie Glass says he wants to use every part of the animal, he isn't kidding, which is why you'll find pig tails on the menu at Grisette, opening soon in Church Hill. Cooked low and slow before being deep-fried and served with honey, benne seeds, chilies, scallions and house-made pickles, the tail isn't the cute little curlicue you may be picturing — it's a long, hefty piece of meat with a bone running through the middle, cut into three or four pieces. The size and texture are similar to those of a chicken wing, and you eat it like corn on the cob.

Co-owners Donnie and Megan Glass, who met at the Charlottesville restaurant Public Fish and Oyster in 2015 and got married two years later, both know their way around a kitchen. Megan was recently a line cook at Lemaire, but her dining experience also includes front-of-the-house, so she's taking the lead as general manager while Donnie's at the helm as chef. They've also partnered with Andy McClure, who owns several Charlottesville restaurants and Citizen Burger Bar in Carytown.

The 50-seat restaurant, which the Glasses say was designed to look and feel like their own living room, will serve a meticulously curated menu of Southern French-inspired dishes with seasonal, local ingredients. They define local as anything within a day's drive, and when something is out of season it's off the menu. You won't be served cabbage in summer or tomatoes in winter, and the selection will change weekly.

Those tails, an often neglected cut of the pig, represent the type of cooking Donnie wants to bring to Grisette.

"While it's easy to cook somebody a duck breast or a rib-eye and make a beautiful sauce and put it on a plate, it's far more challenging to go to the farmers market, buy five ducks from Free Union Grass Farm, and say 'How am I going to make 100 dishes out of five ducks?'" he explains.

So how does he do that? By using the skin, fat, bones, necks, legs, thighs and breasts, while also incorporating "what's in surplus," like produce, legumes and grains.

"It can be done, but it's difficult. I think it's more fun," he says. "It's more fun than buying a case of duck breasts, having them sent to you and all you're doing is marinating them, scoring them, searing them and serving them. That's easy."

They've been tinkering with the opening menu for weeks, swapping ingredients in and out as farms' produce availability changes. Last week, the menu included a tomato tart with a green salad, goat cheese and black pepper tortellini, a summer bean salad with maitake mushrooms and steak frites with bearnaise. A lightly sweet foie gras eclair will be available as an opening special, and dessert will always be some sort of house-made pie with ice cream from Gelati Celesti. All breads and pastries will be made in-house, along with sauces, pickles, jams and preserves.

With the exception of a shareable charcuterie smorgasbord for $29, everything on the menu will cost less than $20, which the Glasses say was intentional. As young professionals who live in the neighborhood and love going out to eat, they wanted to create a space for people like them. Casual dress is welcome, Donnie says, and they hope Grisette becomes a regular go-to spot rather than a special occasion destination. Keeping the bar accessible is a big part of that.

Wines cost $9 or less by the glass, around $50 per bottle, and guests can pick a liqueur to build their own spritz. Classic-inspired cocktails, crafted by bar manager Caleb Donovan, who comes to Grisette after a lengthy stint behind the bar at Can Can Brasserie, won't exceed $10.

"We really want to cultivate a vibe where you can come in in shorts and a T-shirt and get a $4 beer or $8 glass of wine and hang out," Donnie says.

Grisette's doors haven't officially opened yet, but the owners say it'll be any day now. Keep an eye on Facebook and Instagram for updates.