With Fuel Pump, a New York couple brings an all-day work and social concept to Carytown. 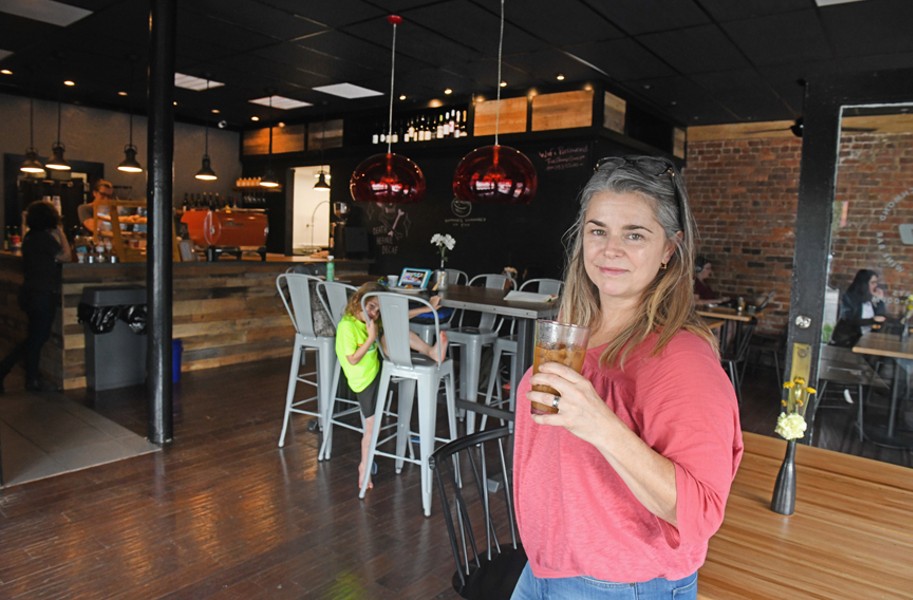 Scott Elmquist Co-owner Mary Dail hopes to make Fuel Pump a gathering space that offers both the morning cup of coffee and the late-night wine fix.

Loki, named after the Norse god of mischief, sits idly in the high-top metallic chair closest to the bronzed La Marzocco coffee machines, his 6-year-old feet dangling above camo blue Gap flip-flops on the floor. He's used to keeping preoccupied at the bar top.

It's nearing the lunching hour at Fuel Pump, a coffee-station and wine-bar hybrid that celebrated its debut in Carytown on June 7. Since the panini set to be rolled out on the menu are still in the works, co-owner Mary Dail offers her son a buttery slice of toast.

Dail has yet to find her favorite in the panini trial runs, noting that she's a hot-sauce-on-hot-wings kind of gal and they're not spicy enough. Andreas Waltenburg, the co-owner and her husband, interjects to agree that "food is merely a vessel for hot sauce."

Fuel Pump's Instagram account teases dishes for those with tamer taste buds, such as homemade hummus paired with bagels, ricotta toast with drizzles of honey and avocado radish toast placed strategically on a wooden cutting board — an homage to Dail's days as a photo editor at Martha Stewart Living. Dail looks forward to expanding the menu, especially for charcuterie fanatics.

"We have an idea of what we want to do but we want to be open to what people are receptive to, what they'd like to see," Dail says. "Because it'll be their spot."

Dail, having finished the layout and decor, is already prepared for her next project: refurbishing the patio into a community event space. In the coming months, she hopes to hold oyster roasts, Saturday morning cartoons for the kids, taco nights and, once the liquor license comes in, her husband's "badass margaritas."

But for now, the couple plans to fine-tune what made them start this shop and make the trek from the concrete jungle of New York: Coffee and wine.

"Every day, I find myself on the coffee-to-wine pipeline," Dail says as she picks up her daily iced cortado. "I would have coffee in the morning and wine at night. … No one says 'Hey want to meet up for a water?' You usually say 'Want to grab a cup of coffee?' or 'Want to have a drink?'"

For Waltenburg, many of his connections started with drinks. To him, Fuel Pump's 7 a.m. to 11 p.m. schedule makes sense. "People are coming in, having a bite, having a coffee, and then all of a sudden, it's 4 o'clock and they're like 'OK, let's have a beer.' And they continue to work," he says.

Working-hour favorites include the couple's favorite coffee brand, Intelligentsia, in espresso, drip and iced form. It sold out in the first two weeks. As for the 15 wines? Waltenburg, who's been in the food and drink industry for more than 20 years, just goes for what he likes.

"I love wine," he says. "And a long time ago, I was working for someone who told me, 'Just F what everyone else is saying' … so we just make it fun and find something for everybody."

Fuel Pump has become their heart and soul, with Dail saying it's "mom-and-pop by every sense of the word."

Since Waltenburg still owns his bar in New York and Dail runs a photo studio, with another in the works, their days are far from typical.

But with a few espresso shots, it's doable.