The newest restaurant from Eat wants to be Richmond’s barbecue crossroads. 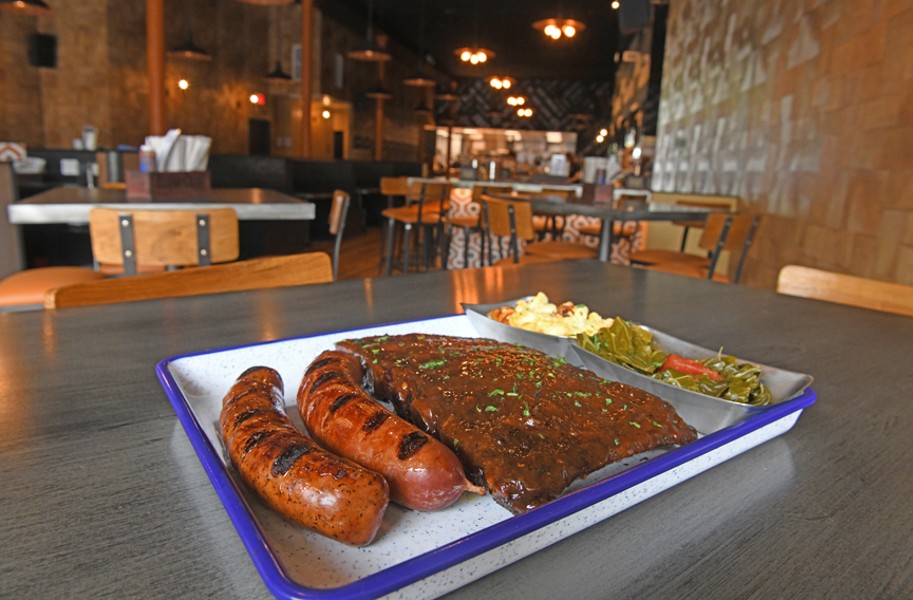 Scott Elmquist Smoked sausages and ribs are just two of the ample meat options at Fatty Smokes, along with nearly a dozen sides like collard greens and mac and cheese.

Barbecue has a way of being both a great equalizer and a polarizing culinary battleground. Everyone can agree the slow-cooked meats and hearty sides deserve a permanent and hallowed place in Richmond's dining world, but where do your loyalties lie? Are you drawn to the tangy vinegar-based North Carolina sauces? Memphis-style dry rubs? Brisket inspired by Texas? The sugar-forward variety that we call our own in Virginia?

Maybe you don't have to decide. One of Richmond's most prominent restaurant groups believes there's room for everyone, not just in the same city but under the same roof.

Introducing Fatty Smokes: A Barbecue Joint, the newest concept from Eat Restaurant Partners, known for spots like Foo Dog, Wong Gonzalez, Pizza and Beer of Richmond and Hot Chick. The new restaurant is on the 300 block of East Broad Street, and hospitality manager Chris Staples notes that nearby street parking is free in the evenings. Executive chef Mike Lindsey is at the helm, and the menu is framed with his extensive culinary background, which includes a stint as a pitmaster in North Carolina.

"Having Mike with all this wisdom and also a background in barbecue allows us to confidently say that we can be a barbecue mecca here in Richmond," says Staples. "There isn't a style under that roof that doesn't hold up to someone who specializes in it."

The menu includes standbys like beef brisket, sausage, pulled pork, smoked turkey and ribs, plus starters like fried green tomatoes, smoked wings and barbecue egg rolls. But much like many of Eat's other restaurants, Fatty Smokes offers up unusual twists on classics, like the Virginia lasagna — pimento macaroni and cheese topped with Brunswick stew and fried collard greens. Ribs are deep-fried and served alongside waffles, and a bowl of ramen features a pickled egg, collard greens, carrots and your choice of meat in smoked pork broth. Sandwiches include the Big Poppa with pulled pork, sausage, bacon and slaw, and El Jefe with beef brisket, beef hot links, pickles, fried onion straws and spicy ranch, both topped with Kansas City barbecue sauce and served between two chunks of toasted jalapeño cornbread with a choice of side.

Speaking of sides, Staples says they're enough to draw even nonmeat-eaters to the restaurant. The list includes green beans, herbed potato salad, jalapeño creamed corn, vegan collard greens and farm-style fries, which he says are like a hybrid between hand-cut and steak fries.

Over at the bar you'll find an extensive selection of spirits, local and otherwise. Six whiskey flights, each featuring three one-ounce pours, range from $15 to $32, with the priciest option offering tastes from Copper Fox, Tarnished Truth and Peerless distilleries. House cocktails all cost $10, with riffs on classics like the ManFattan, featuring bacon-infused rye and bitters.

The 24 taps include local and regional beers, of course, but Staples says barbecue doesn't necessarily lend itself to a hoppy, hyper-local selection. Familiar brews include the Brandy Barrel Wee Heavy from Hardywood Park Craft Brewery and Tropic of Thunder from Stone Brewing Co., plus rotating taps from Bingo Beer Co. and Three Notch'd Brewing Co. Happy hour is every day 3 - 7 p.m. with $2 off draft beer and $1 off cans and bottles.

If somehow you save room for dessert, you have half a dozen sweet options to choose from, including sweet potato cheesecake with marshmallow fluff, peach cobbler bread pudding and a bourbon-pecan ice cream sandwich from Nightingale.

For the next week or so, Fatty Smokes is running a social media special, offering a free order of cheddar cornbread popovers to every table from Tuesday to Saturday between 5 p.m. and 10 p.m. Check the restaurant's Facebook and Instagram for details.

Next on the horizon for Eat is an iteration of Wong Gonzalez in the GreenGate shopping center in Short Pump, which Staples says will be heavily taco-focused but not identical to the original.