The reopening of Jackson Ward’s beloved Stoplight Gelato Cafe under new owners is just around the corner. 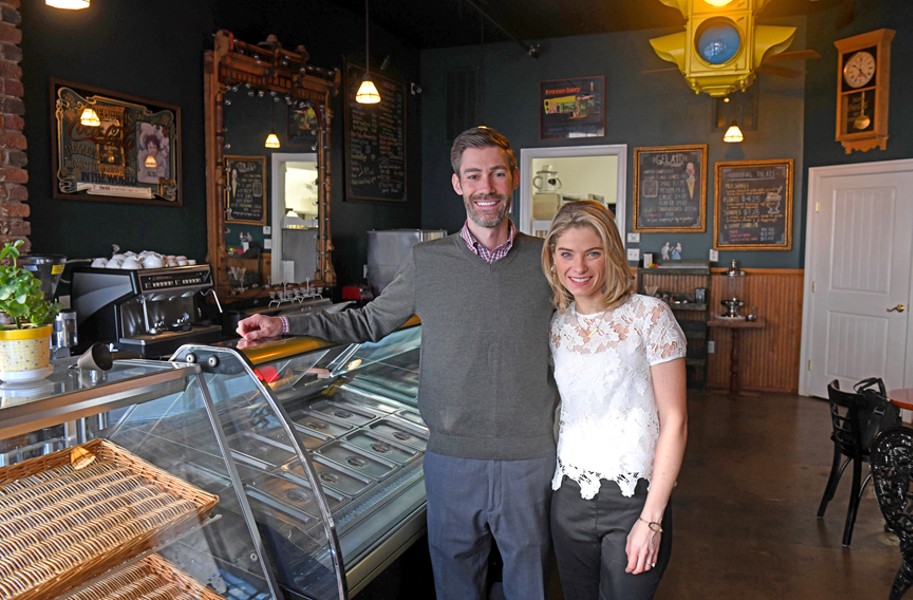 Mike Wilbert vividly remembers the first time he entered Stoplight Gelato Cafe in Jackson Ward. The sweetness of fresh gelato and homemade waffle cones filled the cozy space, and he and his fiancee Caitlin Kilcoin, both 33, were immediately drawn to then-owner Barbara Given.

"She was just running around making jokes, hugging people, kissing people," Wilbert recalls. "We were kind of taken aback, like, is this someone's living room? It felt like you had just walked into your grandmother's house."

Given, now 83, opened the quirky gelato shop nearly three years ago in honor of her son, Bryce, who died the previous year. Known as the neighborhood matriarch, she has a warmth and comforting presence that regulars say makes the cafe more than just a place to get gelato and coffee. Devout gelato lovers expressed profound sadness but also compassion and support when Given announced her decision to close up shop last December due to health concerns. What she didn't make public at the time was the plan for Kilcoin and Wilbert to take over and continue her legacy.

"From the get-go, when we started these discussions with Barb, it was clear that this is not a business transaction," Wilbert says. "This is a transition of ownership where she's guiding us, walking us through everything."

Kilcoin, a senior account manager at EAB, has picked up front-of-the-house shifts at the Hill Cafe since she moved to Richmond for graduate school in 2006. Wilbert worked in restaurants before moving to Richmond eight years ago, and currently works for Apple Hospitality REIT. Both plan to remain in their full-time jobs after reopening Stoplight.

Most of what people love about the Jackson Ward sweet spot will remain the same, like its interior with the old traffic light. The couple has undergone intense gelato-making training over the past several months. Kilcoin recalls their first successful batch with a chuckle.

Stoplight earned a reputation for its creative gelato flavors like fig and goat cheese, rose, blackberry sage, fruit punch and lemon-berry cake. Kilcoin says she's partial to the sorbettos, a vegan alternative to the dairy-based gelato, and she's committed to maintaining a regular rotation of flavors for the dairy-free crowd.

As for changes, the new owners are excited to add beer and wine to the menu. They plan to offer booze-and-gelato pairings, possibly adding beer- and wine-flavored frozen treats to the case. "Whether you want it separately or in your gelato, we can accommodate," Kilcoin says.

Fresh pizzas and updated sandwiches will also be on the new menu.

"It won't be a diner-style menu by any means," Kilcoin says. "We know our signature items. We do small things, but we do them really well."

Other new developments on the horizon include wholesaling gelato to Richmond-area restaurants, which Wilbert says was successful in the past but Given didn't have the manpower to make it sustainable, and a potential cart to roll the stuff out to events around town.

"Barb didn't have a real presence outside of the neighborhood," Wilbert says. "It would be great to share gelato in a cup at any of the public events or festivals, and there's no shortage of them in Richmond."

Kilcoin says she's always surprised when someone tells her they "just never make it down that way" to Jackson Ward, and she'd love to shine more light on the neighborhood she calls home.

"Jackson Ward as a whole is a well-kept secret of Richmond. It's mysterious in a sense, in its own little pocket," Kilcoin says. "Just putting our presence out there, we would like to be a well-known secret."

Keep an eye on Stoplight Gelato Cafe's social media pages for announcements and opening dates. If all goes according to plan, the shop's doors will reopen within weeks.