Stone Brewing has teamed up with Nutista to create beer-inspired peanut butter. 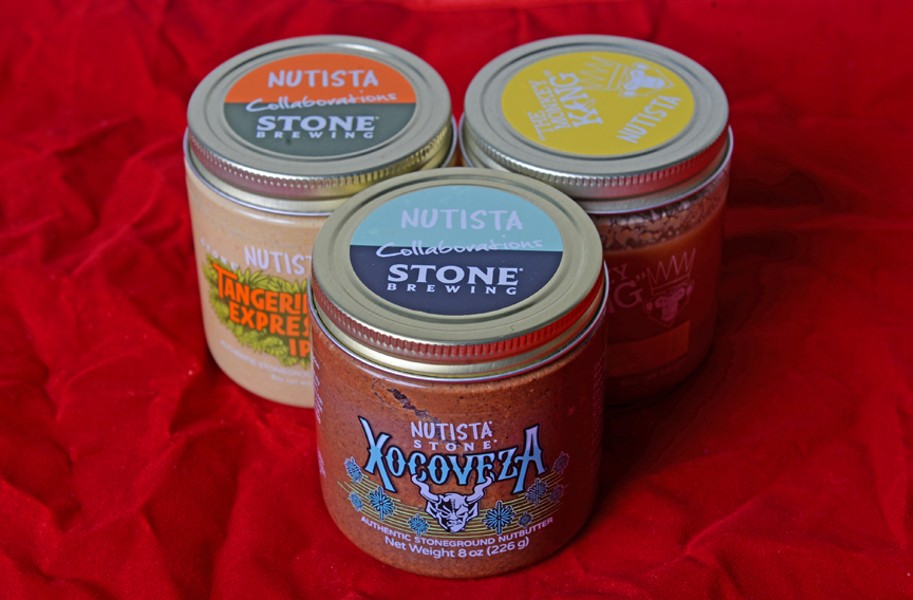 We love collaborations here in Richmond. Nary a weekend goes by without two breweries, a food truck and a cidery, a bakery and a distillery or some such combination announcing an upcoming event featuring their latest joint efforts on the food-and-booze front. We recently learned that a (somewhat) local staple, the California-based-but-Richmond-beloved Stone Brewing, has teamed up with a nut butter company. Yep — beer-flavored peanut butter is a thing that exists, and you can get it in Richmond.

Nutista made its way onto the market last year with a lineup of products like the Mountie, which features raw cashews, sprouted almonds, dry-roasted peanuts and raw pecans. If you're thinking about a classic PB&J, this one is your best bet. Stone co-founder Greg Koch is one of the masterminds behind Nutista, so it was only a matter of time before "Hey, let's try combining these with beer" was a suggestion laid out on the table. With a base of blanched almonds and dry-roasted peanuts, the Stone Tangerine Express IPA nut butter also has dry malt extract, brewer's yeast, tangerine and pineapple. Saying it tastes like beer might be a stretch, but it's got that citrusy tang to it and it's definitely reminiscent of a brew.

There's also the Totalitarian Imperial Russian Stout, with three barley malts, a light dry malt, Brazil Oberon coffee and Belizean cacao mixed in with blanched almonds, dry-roasted peanuts and pecans. The Xocoveza, featuring milk sugar, coconut sugar, pasilla peppers, cinnamon and brewer's yeast, is much thicker than some of the others, with distinct fall notes of cinnamon, nutmeg, chocolate and pepper. It packs a punch, so go slowly — warmed into a hot fudge, it just might complement a scoop of vanilla ice cream. In the Farking Wheaton Wootstout nut butter you'll get notes of coffee, cocoa and bourbon-soaked malt, plus malted rye, roasted barley and brewer's yeast in a base of raw pecans and dry-roasted peanuts.

The Monkey King is free of beer-related ingredients, but still entirely worth mentioning. Thin and almost soupy, it gets much of its flavor from bananas — an entire banana in each jar, according to co-owner Tristen Cross. Dry-roasted peanuts are the only nuts in this one, and it's enhanced by some chia seeds and Himalayan sea salt. Smear it on an apple, drizzle it over a brownie, or just eat it straight off a spoon.

Jars of Nutista are currently available at Stone Brewing on Williamsburg Avenue, and prices range from $12-14 for 8-ounce jars. Keep an eye on nutista.com for online-only special offers, like the Steakhouse One, an almond-and-peanut concoction with paprika, garlic, thyme, mustard, black pepper and cayenne. Cross says a chocolate-mint iteration will soon make its way onto the website for the holidays — she recommends heating that one up and using it as a sauce for brownies or churros.