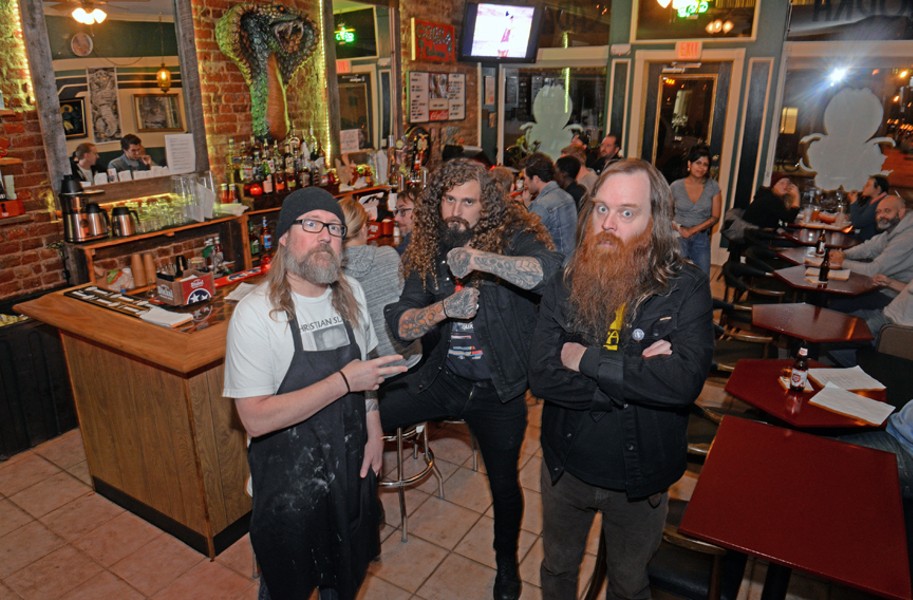 The tiny corner spot on Marshall Street, formerly home to the Black Sheep, has a new tenant: a quirky bar and restaurant called Cobra Cabana. It's the brainchild of Herbie Abernathy, better known as Valient Himself, lead vocalist of the Southern rock and heavy metal band Valient Thorr. And don't be quick to judge this long-haired rocker — he also has a master's degree of fine arts in drawing and painting, collects comic books and loves vegan food.

Abernathy is backed up by two partners: former East Carolina University classmate, restaurateur and DJ Josh Novicki, and Rob Skotis, a bassist in the band Iron Reagan. Their connection? Music, and the myriad places it's taken them.

Abernathy cycled through several ideas, including pizza and barbecue, and several partners before landing with this combination. Novicki, who already owns a restaurant in Wilmington, North Carolina, heads the kitchen with vegan chef Lauren Vincelli. Skotis is in charge of the bar and Abernathy takes the business side.

The menu centers on burgers and sandwiches, about half of which will be vegan. Abernathy himself is vegan and saw a need for more plant-based options on restaurant menus.

The opening week menu featured a vegan lobster roll called the Prince of Tides, with hearts of palm tossed in vegan mayo, celery, peppers, onions and Old Bay seasoning ($12). Diners can look forward to upcoming items like El Pasta, a "vegan pasta burrito" and a meatless meatball sub with mushrooms as a key ingredient. Abernathy expects the menu will continue to change as the kitchen finds its niche with both vegan and nonvegan creations.

The name of each entree comes from inside jokes between Abernathy and his friends that require back stories and feature obscure references, but that's part of the charm.

"Some people call it kitsch, but it's really heavy nostalgia and inside jokes," Abernathy says. "That's what our restaurant is based on."

Case in point: the name Cobra Cabana came from a vintage action figure from a Marvel comic. Yes, Abernathy was thinking about G.I. Joe's nemesis, Cobra and his troops, when the name popped into his head.

"I just think of bad guys on vacation," he says with a grin. In his dream world, the bar is for "cobra troops, when they're not being bad guys."

The drink menu features an array of aptly-named cocktails, or Snake Juice. There's a take on a margarita, the Copperhead, and a dairy-free White Russian called the Dolph Lundgren, served in a pint glass and made with coconut milk.

The crown jewel of the drink selection, though, is the distinct honor of being the only bar in Richmond that, to his knowledge, serves the champagne of beers on draft.

"I've lived in town for six years, and I've never seen High Life on tap," he says. Abernathy acquired High Life swag like a vintage sign, wall clock and tap handle, so of course he had to convince his distributor to make it happen.

There are flat screens to watch the game, plus a vintage Coca-Cola menu letter board and original art featuring snakes covering most of the limited wall space. The back wall is stained reclaimed wood, and the new bar top is a mosaic of old pennies. Behind the bar, a giant metallic painted cobra's head juts out of the brick wall. The sculpture was commissioned by local artist Margaret Rolicki, who also created decor for Gwar Bar.

"She's such an incredible artist; she can make anything. She can make nightmares come to life," he says admiringly. Rolicki's Etsy shop, currently featuring shoes that transform one's feet into werewolf claws, seems to confirm this observation.
It's clear that Cobra Cabana wants to be a homey bar with a decidedly accessible menu.

"We're obviously rock 'n' roll dudes, but we're aiming it at everyone," Abernathy says, noting that Virginia Commonwealth University students receive 10 percent off food. And he's seen a diverse crowd already. "We had wrestling and anime on the other night and there were two completely different crowds watching and both were loving it."

And it goes without saying that when musicians open a restaurant, there has to be a jukebox. That's been a crowd pleaser already.

"They're playing their songs and they're getting their kicks, and they're having a beer, and it seems like a good time for a neighborhood bar," Abernathy says. "That's all I can say." S