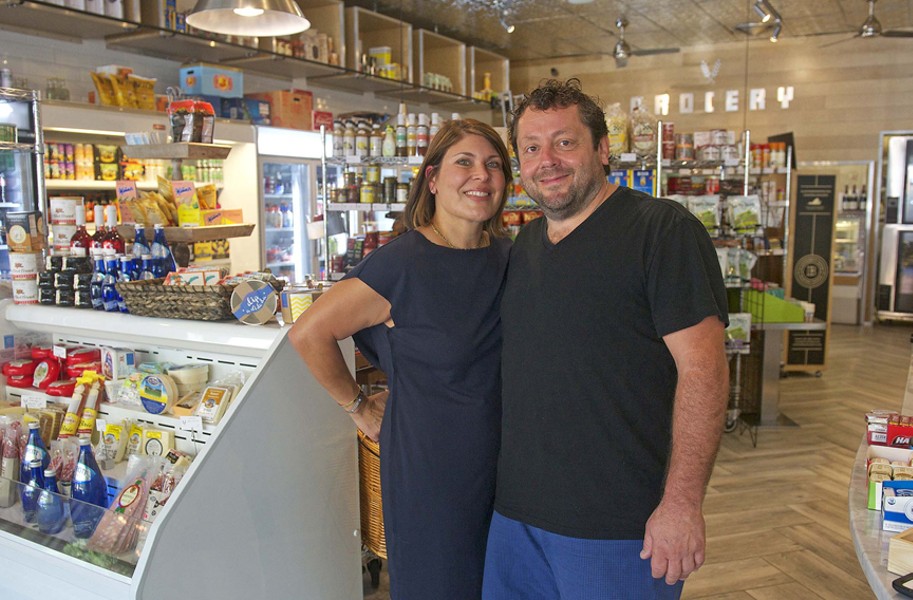 Stella's Grocery purveyors Katrina and Johnny Giavos will open yet another location downtown later this month. Kohlman's Market, already owned and operated by the dining power couple, will undergo a quick re-brand over the next couple weeks to look more like its sister locations. The colorful art deco storefront at 109 E. Grace St., next door to another Giavos-owned location, Perly's, will morph from the current mod pharmacy feel to a cozier grocery store. The second location opened in April in — where else? — Scott's Addition, revealing how much demand there really is for the Dean and Deluca-type spot with a rustic Greek flair.

In addition to a full coffee bar and various oversized baked goods, the new Stella's will carry the same standout dishes near West End neighbors have come to rely on in the event of an empty fridge. Count on your favorites in the case, which may include its famous moussaka, giant Greek salads with slabs of feta, that spinach parmesan orzo with lamb meatballs in marinara (this dish is what dreams are made of), and our current favorite: the pumpkin cream sauce pappardelle topped with pancetta and sage. The lemon chicken soup that's basically Stella's answer to a sick day. The hummus that is better than everyone else's hummus. The list goes on, but they all have the same magic touch: fresh ingredients and tons of flavor. Nothing needs to be seasoned. Every serving is generous.

Don't want to go out? That's OK, especially since the restaurant remains one of the hardest reservations to get in Richmond (seriously — check OpenTable three weeks from now). Instead, enjoy Stella's entrees at home. Most dishes at Stella's Grocery are packaged for dinner portions and lend themselves well to an upscale date night in. Desserts like the tres leches cake and Snickers cake sweeten the deal.

Stop on the way home from work. And if you don't know what to try first, start with the hummus.