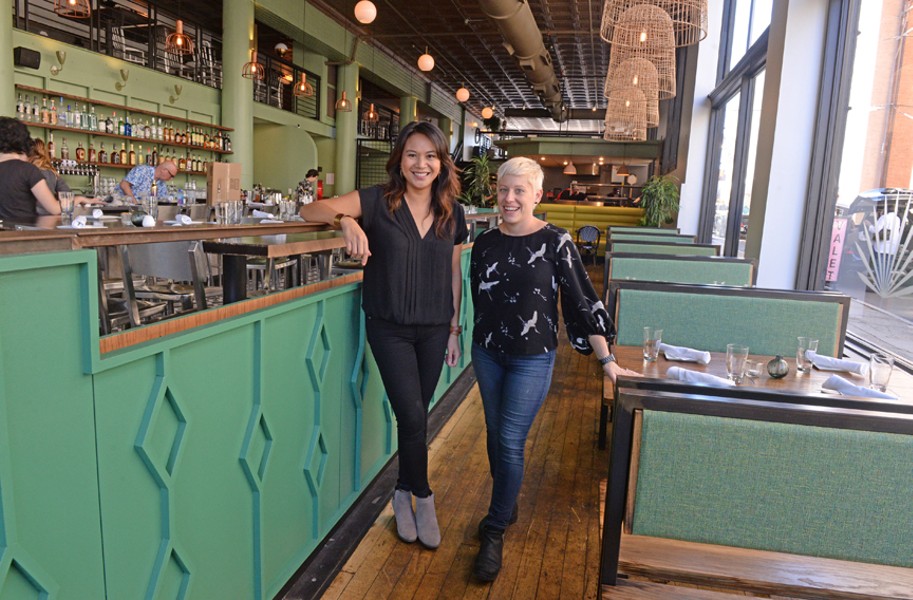 When the team at RVA Hospitality signed a lease on the old Graffiato space, they knew they wanted to utilize that wood-fired oven. A few short months later, they’re ready to introduce Bar Solita, a Mediterranean restaurant and bar with Spanish, Italian, Greek and Portuguese influences.

A hefty renovation of the interior gave the restaurant a softer, homier feel with more rounded edges, plus bold details like the mustard yellow banquette and new black and white floor tiles. Co-owner Elizabeth Kincaid says they made an effort to reuse and repurpose as much as possible, like the booths along the right side, which they reupholstered with a turquoise fabric. The two long, 14-top communal tables by the bar didn’t quite fit with the desired vibe, so they sawed each in half and rotated them, filling the space in a way Kincaid says is more functional. Couches and a coffee table create a cozy lounge area to the left of the host stand.

“We just wanted to make it more homey, a little more feminine,” Kincaid says. “Before it was very masculine, very sterile, very industrial and we wanted to create different phases and experiences.”

The management team includes familiar faces — corporate chef Michael McGhee and executive chef Danny Kelly from Tarrant’s Cafe are in the kitchen and Sean Rapoza of Max’s on Broad is on board as sommelier. New to RVA Hospitality and to Richmond is bar manager Parker Girard, who just relocated from D.C. to curate Bar Solita’s cocktail program. Determining which spirits and flavors complement Mediterranean cuisine isn’t entirely intuitive, and Girard jumped at the creative opportunity.

Among the cocktails available is the Tahini Time, a concoction of white rum, honey, lime and salt that’s reminiscent of a classic daiquiri with a small spoonful of savory, toasty house-made tahini shaken right in. Another drink embracing Mediterranean flavors is the Sultan of Shake, a smooth, frothy mix of za’atar-infused gin, aquafaba, lemon and honey. There’s also the Holiday in Catania with vodka, pomegranate liqueur, honey and lemon, pale pink in color and similar to a boozy pink lemonade.

“To them Mediterranean didn’t just mean Greek, really, it meant the whole scope of the Mediterranean,” Girard says. “There are so many flavors down there, I really got super excited about all the flavors I get to play with.”

On the food side, the menu is built around shareable, tapas-style dishes like miniature spicy beef tacos, pork and veal meatballs in tomato sauce with garlic bread, garlic mushrooms in a sherry sauce and house made hummus with wood-fired pita. Personal-sized pizzas with slightly charred, garlicky crust include a classic Margherita and the cod brandade, with marinated tomatoes, a runny egg, parsley, tarragon and chives. Chef McGhee says they’ll make as many things as possible in house, like the feta, mozzarella and smoked almonds.

Entrees will include plates such as half a roasted chicken and a whole fish, prepared with Mediterranean spices and sides, plus housemade pastas. McGhee says the kitchen will source as many local ingredients as possible, like meat and seafood, but the Mediterranean nature means some items simply can’t come from nearby.

The dessert menu includes baklava and scoops from Gelati Celesti, plus galaktoboureko, the classic Greek sweet of semolina custard between layers of philo.

Bar Solita, which will roll out its entire menu gradually, opens to the public at 11 a.m. on Friday, Oct. 5.