Tang and Biscuit is open for business in Scott's Addition. 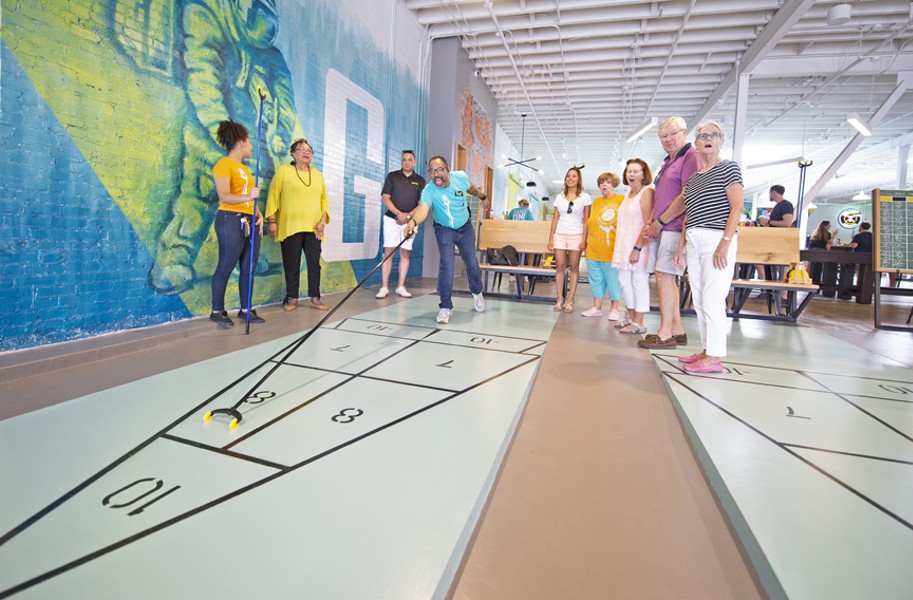 Ash Daniel At Tang and Biscuit, challenge your friends to a round of shuffleboard between bits of tater tots.
Remember a few months ago when we told you about Tang and Biscuit, the shuffleboard venue coming to Scott’s Addition? Doors officially opened last Sunday, and now that they've worked out some of the first-week kinks, they're holding a grand opening party this Saturday.

At 3406 W. Moore St., the 18,000-square-foot space features 10 regulation shuffleboard courts and a 50-foot bar. Corn hole, pingpong, giant Jenga and board games are also available, so there’s truly something for everybody.

As for what to nosh on between turns at the court, the beer menu lists domestic staples like Pabst Blue Ribbon and Corona, plus local favorites like Vasen Brewing on draft. True to the name, the cocktail list includes a Tangtini, featuring the classic orange powdered drink Tang, citrus vodka, fresh orange juice and Cointreau. To eat you’ve got biscuits (naturally) with sandwich fillings like pulled pork and coleslaw, chicken, bacon and ranch, and shredded beef with Chees Whiz. Loaded tater tots are also available, with four topping options — think nachos, poutine, barbecue and baked potato.