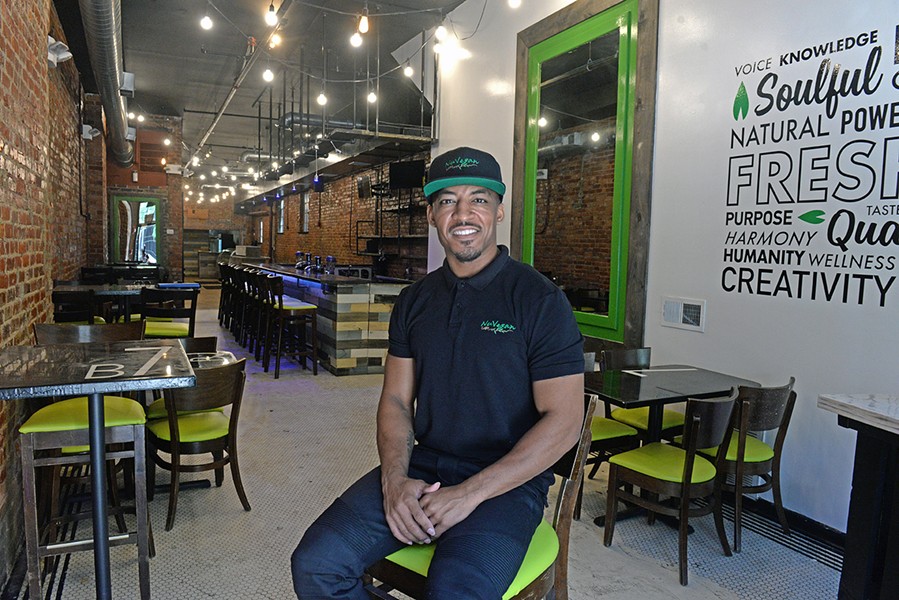 Scott Elmquist Jason Jackson will soon open NuVegan Cafe on West Grace Street.
Is life without cheese even a life worth living? According to Jason Jackson, franchise owner of soon-to-open NuVegan Cafe Richmond, the answer is an emphatic yes. After three years as a vegetarian, Jackson gave up all animal products last year, and he can’t wait to bring NuVegan’s plant-based menu to Richmond.

“It’s not just for vegans,” Jackson says. “It’s for everybody.”

The original NuVegan Cafe opened in Washington in 2016 when Woodland’s Vegan Bistro was re-branded. Jackson’s is the first franchise, and he says it’s about time a concept like this makes its way to town.

“Richmond has a vegan culture, but a lot of people don’t have anywhere to eat as far as full meals,” he says. “It’s been a long time coming and we’re finally here.”

When Jackson first embarked on a lifestyle free of all animal products, he says his focus was primarily on vegetables and legumes. Friends and family were concerned that he wouldn’t get enough protein in his diet, and he says he ate a lot of black bean burgers in the beginning. But he’s since discovered — and is eager to share — a whole new world of vegan options and meat substitutes that go beyond a pile of vegetables or some beans pressed together into a patty.

Jackson admits that every now and then he still gets a hankering for a burger, and it took him three years to go from vegetarian to vegan because eggs and cheese were his kryptonite. But so much of the cafe’s menu centers on creative replacements for meat- and cheese-based dishes, and he says people may be surprised at how satisfying a vegan steak-and-cheese sub, crabless crabcakes and dairy-free macaroni and cheese can be.

The fast-casual menu, which covers lunch and dinner, features about a dozen sandwiches, including a tofu avocado club and a grilled quesadilla with meat-free chicken or steak. Entrees include lasagna and barbecue tofu with rice, which you can pair with any combination of more than 30 hot and cold sides. Everything is served in a cafeteria-style line, so go ahead and pile your plate with ginger collards, Asian noodles, carrot soufflé, red curry tofu, grilled squash and brown rice. There’s even a brunch menu on Sundays. It’s hard to imagine a brunch selection without eggs or hollandaise sauce, but you can get things like a tofu scramble and a breakfast burrito, and standbys like pancakes, waffles and french toast.

You won’t find any booze on the menu, but the drink menu includes made-to-order fresh-squeezed juices, smoothies and milkshakes made with soy, rice, almond or hemp milk. The grand opening is set for Saturday, June 30, so herbivores and carnivores who want to try something new rejoice.