Virginia Beach will soon be home to a floating food boat 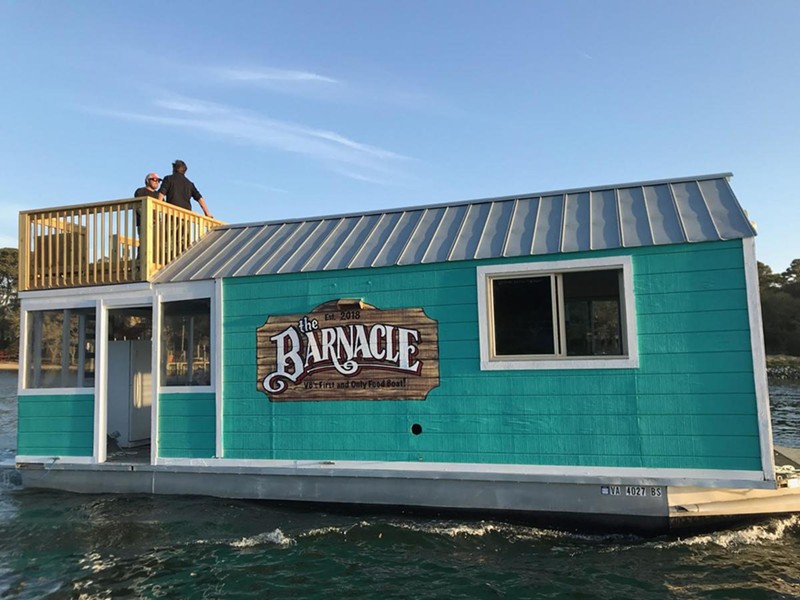 The Barnacle, a floating food boat that specializes in cones, will open May 1.

Sure, food carts are nice, if you’re at a brewery. But can a food cart bring you an ice cream bubble cone when you’re out on your friend’s boat?

Starting May 1, three partners will open a kind of mobile restaurant they say has never been seen in Virginia Beach.

“The Barnacle,” says a sign painted on the floating eatery by local artist Sam Welty. “VB’s first and only food boat!”

Weather and scheduling permitting, the Barnacle will post up Thursdays to Sundays at the Narrows on 64th Street, at the edge of First Landing State Park. The boat will be open from 10:30 a.m. till sundown.

“We’ve always been under the idea that there’s never food out on the water,” says co-owner Bo Zinno, whose mother’s restaurant the Anchor Inn served crab cakes and steak for 30 years in Virginia Beach.

“We’re always out there, and there’s never anywhere to go eat because we’re on boats,” says partner Tracy Edwards, who runs a pair of country bars called the Eagle’s Nest with her husband, Shea. “But this’ll be in the water.”

The Barnacle will be mobile, and hireable for private parties at places like Bay Island.

But for now, its home base will be at the Narrows along Broad Bay near Virginia Beach’s northeastern tip, where the boat will be accessible to walk-up customers via a mobile dock. Boaters will also be able to pull up alongside and pick up food, bags of ice, ice cream bars or even sunscreen.

“The boating world is different from the regular world,” Tracy Edwards says. “You leave all your problems behind. You know how the ice cream man has ice cream man music? We’ll come up with reggae music. That’ll be our trademark.”

The food at the Barnacle will mostly come in a single shape: a cone.

“One is a pizza cone,” Edwards says. “We put the dough in this machine and it comes in the shape of a cone: It bakes it. We wanted to make the food, and hold it out the window and be like, ‘Here’s your cone!’ It’ll be pizza cones, taco cones, and waffle cones, made from scratch.”

But those ice cream waffle cones won’t be the familiar sort invented by Norfolk’s Abe Doumar over a century ago.

The cones served at the Barnacle will be the Hong Kong-style street snack that’s become an Instagram phenomenon over the past two years. Also called egg waffles, the bubble waffle cones are made fresh, stuffed with ice cream and topped with scads of whipped cream and often other toppings.

“The cones look just like bubble wrap,” says Edwards. “We’ve been tweaking that recipe. We use a tapioca base so it’s sweet. It’s so good.”

Zinno says a lot of locals have already seen the boat and are plenty excited.

“We keep it at Marina Shores,” he says. “We (floated the Barnacle) down past Dockside, Chick’s, Back Deck. We went by four different bars on the water. People were cheering. People were losing their minds. That’s the thing: It’s so unique.”

The Barnacle will open officially May 1, but Zinno said anybody who wants to should come out for a preview from noon to 5 p.m. on April 25 – especially if they happen to have a boat.

That’s when the Travel Channel and the Food Network are scheduled to be filming the Barnacle for a new show about food boats, he says.

“We’ve got 10 boats already confirmed,” Zinno says. “We’re trying to get as many people out there as we can. Anybody who wants to get on TV, come out on April 25.”