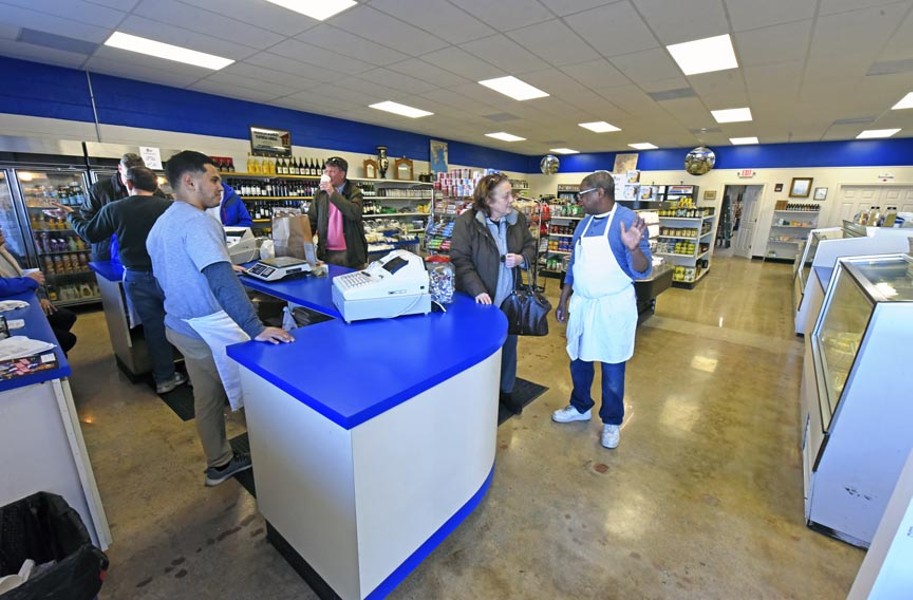 Andrew Baker and his wife have been making the 75-mile trek from Newport News to Nick's International Market every few months for more than 50 years.

They don't intend to stop now that the shop has moved from Broad Street to Westwood Avenue.

Eschewing the interstate, they take back roads to and from Richmond, motivated by the promise of honey, cookies and cheese from their native Crete.

It was exactly those kinds of foodstuffs that inspired original owner Nick Mouris, also born on the island of Crete, to broaden his inventory in 1967 from produce to international foods.

Opened to the public on Jan. 18, the latest iteration of Nick's is both familiar and surprising, mainly because the new store is much roomier than the cramped quarters on Broad. For owner Manuel Mouris, Nick's son, it's the culmination of getting to start from scratch by gutting the space and building it out to best suit the market.

Like a proud papa, he shows off the spacious aisles, extended wine selection and impressive cheese array, but his most effusive praise is reserved for the back of the building. The equivalent of a warehouse, there's more space — storage, refrigerated and freezer — than the entirety of the former Nick's.

Pointing at two pallets of feta cheese, Mouris seems about to bust his buttons.

"That took us 15 minutes to unload," he humble brags. "It would've broken our backs and taken two hours at Broad Street because we were so jammed up with so little room."

While some knew and loved the original location of Nick's solely for the hearty and habit-forming subs that drew legions of daily regulars, folks like the Bakers are devoted to the store because its Mediterranean products are imported directly. Similarly, local restaurateurs wanting the real deal are also regular customers.

"This Kyknos tomato paste? It's so much thicker than regular tomato paste. It's a mainstay in Stella's cooking," Mouris explains, referring to Richmond's patron saint of Greek food, Stella Dikos and her eponymous restaurants.

A walk through the expansive aisles reveals one temptation after another: 3-liter cans of Hermes olive oil, gallon-size jars of Krinos pepperoncini, Greek fruit preserves, olive oil soaps, frozen spanikopita and tiropita made in Greece. One of Bon Appetit magazine's food trends for 2018 — tinned seafood — is well represented on an end cap loaded with the bounty of the sea in cans: cod, sardines, calamari, tuna and squid. Virginia shows up with Edwards hams, bacon and sausages, plus Old Mansion spices made in Petersburg.

In addition to roomier digs and an abundance of storage, part of the plan for the new location is to join the 21st century. As anyone who's ever made a purchase can attest, Nick's hasn't exactly been on the cutting edge of technology, but that's changing, thanks to operations manager and recent Virginia Commonwealth University graduate Elias Burrell, who worked part-time at Nick's as a student. Always fascinated by the grocery business, he saw an opportunity to put into practice what he learned in business school.

Part of that will be an update to the point-of-sale and inventory systems, but Burrell imagines an even wider audience for Nick's products than Virginia.

"There's a big opportunity in online sales, especially for the younger Greek generations. Also for restaurants," he says. "We think that pushing out of our comfort zone by integrating new technology is going to be great for business."

One thing that won't change is some shoppers' preference to browse a brick-and-mortar store rather than a website. The new location, just off Broad, offers a far more comfortable shopping experience with an expanded inventory, not to mention a parking lot. Take that, Broad Street.

And now it's time to acknowledge the elephant in the room, the new reality at Nick's: It's out of the sandwich-making business. But the good news is you can still get everything you need to make your own, sliced to order. And gregarious counterman Toney "Talk-to-Me" Wiley, who's been serving up the soups and sandwiches since 1998, now roams the shop, eager to assist customers.

Besides, if your sole interest in Nick's is those fabulous sandwiches, you're missing the point. Just ask a loyal customer of a half-century. It all boils down to one thing for the Greek-born Baker.

"I can find everything from home here." S