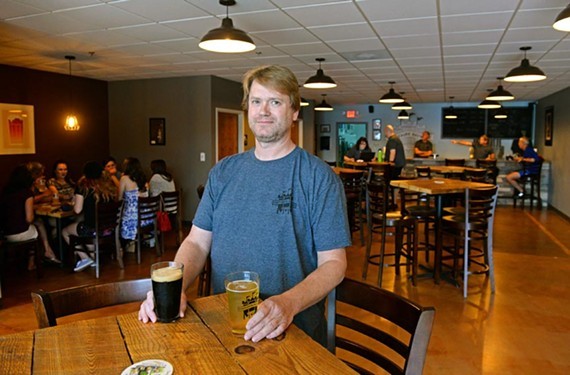 As owner and head brewer of Castleburg Brewery, Karl Homburg has acted methodically and deliberately.

He quickly filled out his beer lineup to fill all 10 taps. He eventually made the brewery his full-time job and added Wednesdays and Thursdays to tasting room hours.

Castleburg’s latest news reflects its biggest step so far, though Homburg wasn’t quite as methodical and deliberate as he would’ve liked. Last summer, the suite next to the current space at 1626 Ownby Lane became available. Homburg had first right of refusal and knew that if he didn’t jump on the opportunity, the next tenant would be locked into a three-year lease — time during which Castleburg would not have the room to grow so easily.

After several months of seeking funding and negotiating with the landlord, Crenshaw-Singleton, the deal was sealed.

“It was something I had to take advantage of while I had the chance,” Homburg explained. “The landlord’s been great. He’s worked with me. … He’s doing most of the work [on the new space], too.”

Once walls come down between the two suites, the tasting room will swell from a little more than 50 seats to about 150. A small stage in the front corner of the new room will provide a platform for musicians and events. He’ll add some drink rails but mostly a mix of high-top and low-top tables, potentially even a community table, all made from reclaimed wood from Swingin Tree Farms, like the original tables.

In addition, he’ll add another 10 tap lines. Though there may be some duplicate lines for high-volume beers and a couple of Randall lines for infusions, Homburg hopes to offer nearly 20 distinct beers.

The production area will remain as is in the original space, adding only about a 20-foot-deep space in the rear of the new suite for storage.

In the spring, he’ll also modify the front patio to increase that seating capacity and fill out the video game room.

Though Homburg and his partner, Rhonda Groves, may not have written the expansion into the business plan quite so soon, the timing works out. “We get the music in here, we get the trivia in here … last Saturday we had comedy, it was standing room only. People had to go outside because there were too many people inside,” Homburg said. “That’s happening more and more. We’re getting to a point now where we really do need it.”

The expanded tasting room is projected to be completed early next year.

“I’m hoping for zero downtime,” Homburg says. “We’re going to get everything done over there first —- at least to a minimum point, the bar and taps we might not do right away.” When the only thing left is to take out the wall, that can theoretically be completed on a Monday, Tuesday and Wednesday, before Wednesday open hours.

Other changes are afoot, too. A new machine should be available in mid-January allowing customers to take Castleburg brews to-go in the 16-ounce can format. A new, professionally produced website is in the works. Homburg is still brewing on the original 2½-barrel system and using four fermenters, so expanding the system is the next step, he said, especially adding a larger fermenter.

But most notably, Homburg says he is hoping to sign with a distributor in January. “That’s what will probably drive the need for more fermenters,” Homburg explained.

Stay tuned for that announcement.