The Phantom of Hardywood 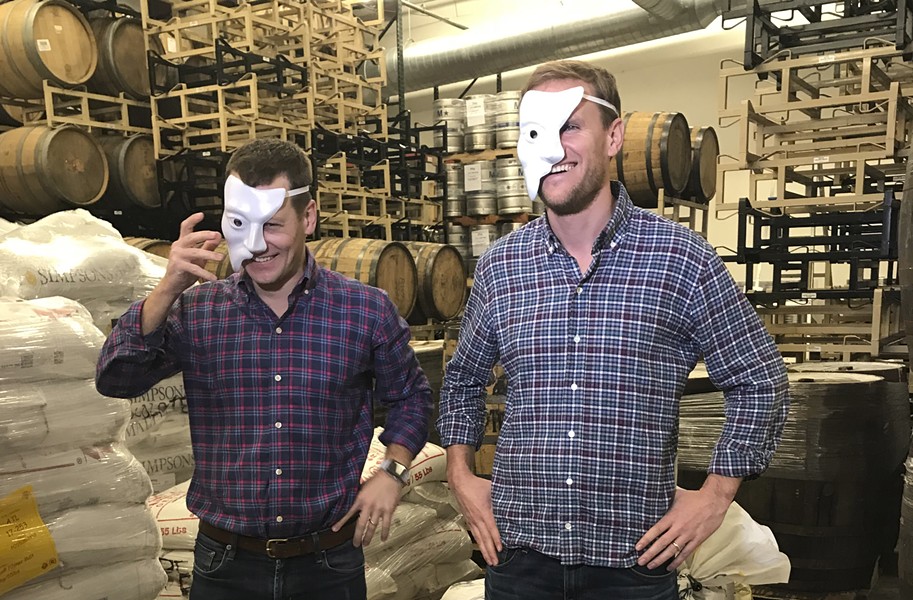 Hardywood owners Eric McKay and Patrick Murtaugh are collaborating on a "Phantom of the Opera" brew with the Happy Hour Guys to be released in early 2018.
The latest collaboration beer from Hardywood Park Craft Brewery springs from a partnership with the Happy Hour Guys and Broadway’s "Phantom of the Opera." It's part of the Broadway Brews Project, which pairs a craft brewery with a Broadway show to create a themed beer, in support of a charity of the cast’s choosing.

They met as Broadway actors and together created the Happy Hour Guys. “The project came out of a love of historic bars and the pub culture,” says Aldrich. Knowing both theater and craft-brewing people, they noticed that the two have a lot in common: Both take risks to achieve their dreams, are passionate about their fields and go out of their way to support the community. Thus was born the Broadway Brews Project.

A COLLABORATION IS BORN

Hardywood’s marketing manager, Matt Shofner, heard about the Broadway Brews Project and reached out to Aldrich and Ludwig.

“It was a bit of a change in direction. Originally, we were going to include only New York-area breweries,” Aldrich explains, pointing out that theater cast members have limited time off to participate in the brewing process. “Hardywood was so enthusiastic and generous with their time and creativity — and I’m from Northern Virginia and I knew the quality [of the beer] — so we decided to take the leap.”

“As it turns out, it’s a match made in heaven, in spite of the distance,” says Ludwig. “Many of the Hardywood folk are theater fans and theater-makers, as you have a thriving arts scene in Richmond.”

In late November, Shofner and Hardywood head brewer Brian Nelson went to New York to see the show and meet with the cast to decide on style, name, label art concepts and the benefitting charity. On Dec. 3, cast members Ali Ewoldt (Christine), Paul A. Schaefer (Phantom cover) and Rodney Ingram (Raoul) and the Happy Hour pair came to Richmond for brew day.

“Hardywood was incredibly generous with their time and resources and creativity,” Aldrich says. “We had a great day, got a tour of the facility and took a drive out to the new facility — which is breathtaking. It was all wrapped up with a great dinner put together by Graffiato’s. … We didn’t just make beer, we made a lot of friends.”

Hardywood brewer, Kevin Storm, has created a black lager inspired by the character of the Phantom.

“We want to brew something refreshing and accessible for the guests at the Majestic Theatre in New York that visually represents the dark and mysterious mood of the show,” says Shofner. “The deep, black color of the beer is a great contrast to the flavor profile, which is refreshing and bright with notes of stone fruit and toasted pecan, and very subtle chocolate undertones.”

After soliciting suggestions for beer names, the Guys, Phantom cast members and Hardywood narrowed the entries down to a list of finalists, including Lot 666, Pint of No Return, Drink of Me, Darkness Stirs, Wishing You Were Somehow Beer Again, Phantom’s Lair Lager and Chande-beer. The winner has been chosen, but it won't be announced until after necessary government approvals.

During this process, all upfront expenses have been shared between the teams. The brewery covers brewing costs and the Happy Hour Guys cover the production of the episodes.

After the beer is released, a percentage of the sales go to the charity of choice. “As long as the beer is brewed, the charity will see returns,” Ludwig says. “And with a show like "Phantom," which has already run for 30 years, they will likely continue to run a long, long time, and this can mean a great deal (both in dollars and in exposure) for them. The beer is a conversation starter, so the exposure for the charity becomes just as valuable as the money.”

“We are so excited to head back up to NYC in early 2018 to release the beer, celebrate everyone’s commitment to this one-of-a-kind opportunity and begin raising funds for a wonderful organization,” Shofner says.

It will be available in New York at select bars and restaurants in the Theater District and at the Majestic Theatre, as well as in Hardywood’s Richmond and Charlottesville tap rooms.

For updates on the beer name, release date and charity, follow @TheHappyHourGuys or @Hardywood on social media. The videos will be available on Vimeo  and YouTube.

And Hardywood is planning another "Phantom" beer, this one to commemorate the show’s 30th anniversary. Shofner describes it as “a sparkling ale brewed with a champagne yeast and rose hips, inspired by the Phantom’s love interest, Christine Daae, and the famed chandelier that plays a key role in the show.”