Community Support for Courthouse Creek Cider after a Major Fire

Three benefits will be held this weekend for Eric and Liza Cioffi. 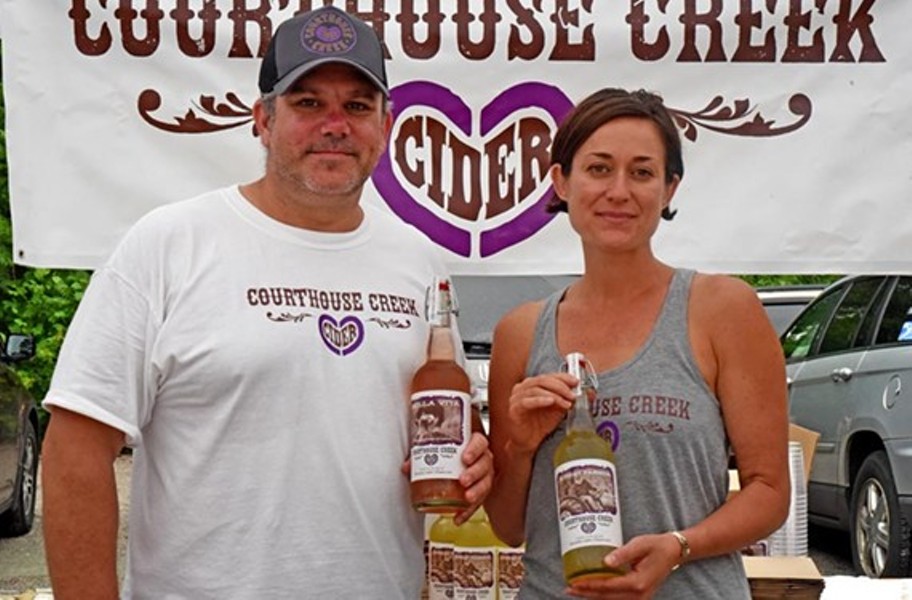 Scott Elmquist Eric and Liza Cioffi lost their home and pets in a fire at the end of March.

After a fire burned Eric and Liza Cioffi’s home to the ground on Friday, March 31, the Richmond community rallied to support them, including the local craft beverage community. The family home sits near their family business: Courthouse Creek Cider and its adjoining orchards.

The cidery has been bottling and selling their product since May 2016, initially at the South of the James Farmers Market at Forest Hill Park, and later in limited distribution. On March 18, 2017, they opened the tasting room.

“Gratitude is an everyday experience — and our cup overflowed with it yesterday as we celebrated the opening of our tasting room,” the Cioffis posted on the Courthouse Creek Cider Facebook page.

Less than two weeks later, on March 31, their home caught fire while they were away, with their pets inside.

“We’re in a rural water supply operation — we don’t have any fire hydrants in close proximity,” a fire official told Richmond’s WTVR-6 after the fire. “Daytime’s always a challenge with staffing. … Those two factors and the amount of fire that we had on arrival of the units, all three of those combined to create the damage.”

The next day, the Cioffis posted about their loss on the Courthouse Creek Cider Facebook page.

The outpouring of support began immediately. The Steward School, where the family’s four children attend fifth through ninth grades, is accepting donations. The Virginia Cider Association is exploring an industry-wide campaign to support their fellow cider makers.

On Saturday, April 8, Buskey Cider in Scott’s Addition is releasing Strawberry-Rhubarb Cider and will donate $3 of each pint to the Cioffi family and accept donations.

Strangeways Brewing owner Neil Burton and his wife, Maya Eckstein, are personal friends of the Cioffi family and have been in close contact with them since the fire, helping to provide shelter and assess their needs. Support from Strangeways will focus on the loss of the family pets.

“A pet’s loss runs deep and is profound,” says Strangeways sales and marketing director Tonie Stevens. “Theirs will be more so because the magnitude of losing all their pets at once. Receiving messages from others really helps in the grieving process and starts the process of mending the heart with thoughts that their pets will not be forgotten.”

To include customers in the effort, Strangeways’ annual Bow Wow Meow Luau event on Sunday, April 9, will kick off with a pet blessing. Participants at the event can inscribe a message for the family or pets on a stone, which will become part of a memorial installation that will include a headstone.

Eckstein has also offered to act as a clearinghouse for donations, including monetary contributions or gift cards to stores such as Gap, Dick’s, H&M, TJ Maxx/Marshall’s, Target, Amazon and Barnes & Noble. She can be contacted at mayaeckstein12@gmail.com.

The Courthouse Creek Cider tasting room is scheduled to reopen on April 22. Supporting the business will directly support the family.

“The true story is community and gratitude,” says Eric Cioffi. The family has been overwhelmed with the support that they’ve receive. “It’s been unbelievable. We’re just really grateful. The loss of our pets is the true heartbreaker, but we keep perspective — we could’ve been at home and could be dealing with a whole different level of tragedy” he says. “We can rebuild.”