Could Richmond be next? 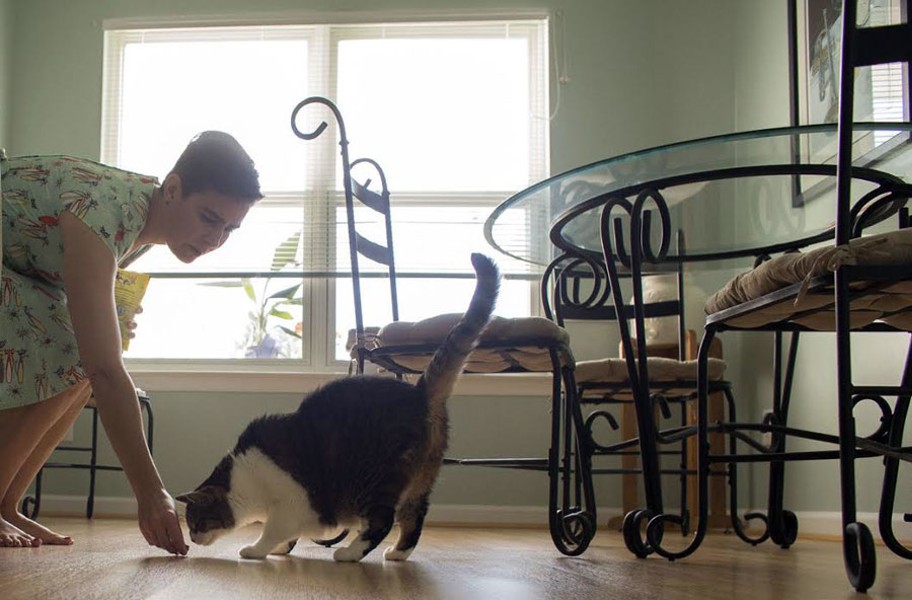 Bill Tiernan Freeda Steele with her cat Frankie at her home in Chesapeake. Steele wants to open a cat cafe in the area.

Freeda Steele has her mind set on having a new kind of business next year, even if she has to claw her way through a hairball of a permitting process.

This is a tail of how an everyday cat lover decided she wanted to open Hampton Roads’ first cat cafe.

Before Steele had reached the age of 40, she discovered she had breast cancer. At the same time, she and her husband were separating. Though not one to dwell on hardships, Steele says that tough time gave her clarity on the life she wanted after – one with a legacy and no regrets.

What is a cat cafe? It’s not a cafe you bring your cat to. It’s not a cafe that serves cat. It’s a business that provides the company of cats and coffee - and sometimes room for laptops. Wi-fi usually accompanies the whiskers.

Warning: The following story is littered with cat puns.

The concept of the cat cafe seems to have started in Taiwan and gained popularity in Japan. The trend has worked its way to the Western hemisphere, with locations in San Diego, New York, L.A. and Washington. There’s no definitive source for cat cafes in the United States, but most estimates put the clowder between 20 and 25, all pouncing on the market within the past three years.

Some people find relaxation in petting or playing with cats. Some have landlords restricting them from having their own at home. The cafes become an urban refuge for both the animals and those craving their affection.

Steele has had her eye on a location in downtown Norfolk. The property is in the city’s Vibrant Spaces, an incentive program intended to draw businesses to Granby Street by offsetting startup costs and providing discounted rent to new businesses.

But before the city will consider offering her a lease, Norfolk must first be willing to change the zoning code for a category of business that, as of meow, doesn’t exist.

Steele has submitted a request to include “kennels” in the downtown district of Freemason and part of Granby. Muddy Paws, a pet store with grooming services, operates in the same area but provides boarding at its other site near Lamberts Point.

City planner Susan Pollock Hart said a cat cafe, though unique, would fit within Norfolk’s kennel definition. The Planning Commission will have the opportunity to discuss the proposed zoning change at a meeting Jan. 26. City Council would have the final say over the decision.

Even if the council approves it, that measure would only scratch the surface. Steele would then submit her business proposal for a special public review. And if she wanted to move into a Vibrant Spaces storefront, the council would vote on the lease.

This first step “isn’t really about her,” Pollock Hart said. “This is: 'Do we want to allow a kennel in the D-3 district?' ”

Steele, now 45 and cancer-free, has always had a cat or two. During her childhood in California, her family never bought one from a store – the furry companions just sort of showed up.

That’s how Frankie the mutt-cat entered Steele’s life about four years ago. One day the feline crawled out of a storm drain in Steele’s Chesapeake neighborhood. Now Frankie lives the good life, occasionally catnapping in mini hammocks attached by suction cup to the windows.

“They just love you," Steele said. "I can’t imagine not having one.”

With Steele in good health and having some savings, she took the leap this fall to purr-sue her dream business. That involved quitting her job, administrative work for a general contractor, and registering her company, Catnip LLC, with the state.

Steele could paw-tentially open in another part of the city that already allows kennels, planning officials said, but she feels strongly that the unusual business requires visibility and foot traffic to succeed.

Downtown Norfolk is where it belongs, she said, although she has recently expanded her search to other areas in case her plan doesn’t work out.

Rob Blizard, executive director of Norfolk Society for the Prevention of Cruelty to Animals, said he hopes the city will be receptive to the idea. The nonprofit would like to partner with Steele. The felines showcased at the future Catnip Cat Cafe would be shelter animals.

With kittens usually adopted first, Blizard said, adult cats are among the hardest to place.

“Sometimes I think it’s a case of bringing the animals to the people,” he said. “I’m all for it, so long as everything’s managed OK.”

Public health regulations would present another ball of yarn. At some other cat cafes, the business owners have built an enclosure to separate food and drink sales from areas where cats roam. Steele, who said she’s had preliminary conversations with health department officials, believes she can design the space to meet requirements.

With just coffee and pre-made snacks on the menu, she doesn’t plan on needing a kitchen for food preparation. She’d also include private spots where the animals could retreat or use the litter boxes. Steele also thinks she’ll manage crowds by asking patrons to sign up for time slots, as other cat cafes have done.

Nyree Wright, a northern Virginia resident who is trying to open Phinicky Pheline Cat Cafe, is searching for a property in Old Town Alexandria and wants to open in the fall. She launched a crowdfunding campaign last year, raising over $7,000.

But one of her biggest challenges has been finding a landlord willing to lease commercial space in which cats would live.

“It’s sort of been a learning year for me,” Wright said. “It’s literally one of the most daunting processes I’ve ever encountered.”

Mary Miller, CEO of Downtown Norfolk Council, said the cat cafe could be a fit for one of the Vibrant Spaces storefronts, but all applications are vetted through a subcommittee. In general, she said, the program seeks unique types of businesses, perhaps new to the city, to liven up the street.

Steele expects some concerns about her plan. But she hopes Norfolk leaders don’t pussyfoot around the issue just because it’s new.

If the fur flies?

“Guess they weren’t hip enough for a cat cafe.”
Prev
Next