The Old Village Cafe Building Is Up for Sale 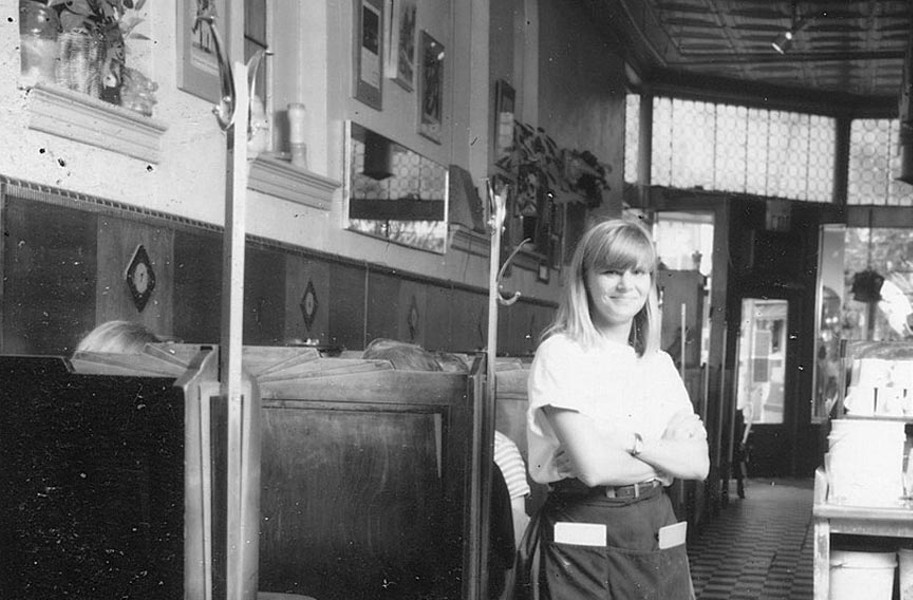 Brandon Fox during a waitressing shift at the old Village Cafe.

I spent seven years waiting tables at the Village Cafe — through undergraduate and graduate school back in the late 1980s and early ‘90s. I spent all but the last year at the “old” Village across the street from where it’s located now.

I remember kicking out bikers — mostly members of the Pagan gang — other gangs and extremely drunk Virginia Commonwealth students on my nightly shifts. I saw a booth ripped from the wall and a gun left behind that the owner came back to reclaim later. The ABC Board came in regularly, once with their own guns drawn despite the fact that it was a pretty quiet night. My favorite customers were the strippers from the Lee Art Theatre — they tipped extravagantly.

But it wasn’t really a rough joint despite these stories. They’re the ones that stand out. It was also full of artists, musicians, professors and others looking for a bottomless cup of coffee and cheap pitchers at happy hour. Author Tom Robbins was a regular in the late '50s and '60s.

I also made a few of my best friends there — and, more important, probably — it’s where my parents met back when Stella Dikos and her husband, Stavros, owned the business.

Now the old Village building, owned by a cousin in Charlie Diradour’s family, is for sale. The owner, who lived above the restaurant, recently passed away. Diradour, of Lions Paw Development, writes on Facebook: “Why didn't she lease the property after the Village moved? I have no idea. My mother would sit on the phone with her for hours trying to explain to her how it would benefit her, but she had fears. They were her fears.”

As a Village veteran, I’m ecstatic. Although the business moved across the street and the old booths and fixtures moved with it, the black-and-white floor and soaring ceilings in the original spot held its soul. I can’t wait to see what moves in next. The new owners need to remember, though, that a lot of ghosts will be waiting, too, arms crossed and ready to protest if it doesn’t live up to their expectations.