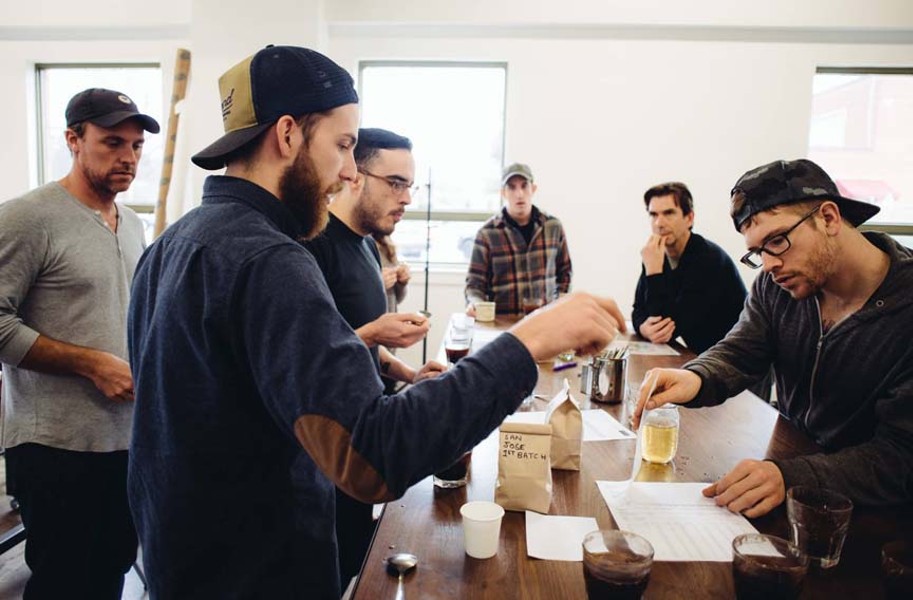 Blanchard’s Coffee Roasting Co.’s Stephen Robertson is just back from Nicaragua when I visit the company’s new building in Scott’s Addition. He and founder David Blanchard were down there talking to one of the farmers who supplies the roastery with beans — and they wanted to up company’s order.

The 11-year-old coffee business recently moved from Manchester to a much larger space in Scott’s Addition. Two state-of-the-art roasters have been installed and a tasting room spans the front of the building. A new bagging system means that about six bags per minute can be cranked out. Blanchard’s is now producing around 70 cases a day, despite the fact that the new machinery still needs a human being to insert the bags and tie them when they’re filled.

“We were out of physical space,” says Blanchard. “If we stayed, we would have had to add a second shift.” Another concern — if their old roaster broke, the closest place that had the capacity and willingness to help them while it was repaired was in Raleigh, North Carolina.

Blanchard’s, available from North Carolina to Maryland, recently signed a distribution deal with Union Kitchen, based in Washington, that should widen its reach even farther.

About half of its coffee is directly sourced. The most common way to obtain beans in the business is to buy them through a coffee broker, says Robertson, but it’s detrimental to growers. “The farmer gets the least amount of the percentage of money of anybody involved,” he says. “That’s just how it works.”

Instead, Blanchard’s works to find growers and buy their beans based on quality, not market value. For instance, this year, the company will buy all of its Nicaraguan source’s top-grade coffee. “This way, we can make drastic and positive changes in the community,” says Robertson.

Here at home, the new cupping room also functions as a test lab for beans and new equipment. Blanchard can tweak the roast of a particular variety to get the kind of sweetness or fruitiness, for instance, that the coffee can best express. The new roasters can then be programmed to duplicate each batch exactly the same way.

Two or three times a week, the entire staff gathers around a tall metal table in the airy room lined with complicated-looking coffee equipment to slurp and taste, call out adjectives and decide which samples they like prefer. Robertson wants to start holding classes in April. There will be weekly cupping sessions to show off the differences between varieties of beans and monthly classes to teach the layperson how to brew a perfect cup of coffee.

“Since we don’t have a coffee shop, we always have a challenge when putting the coffee out there,” Robertson says. “You’re probably brewing a good cup of coffee at home, but I know my mom is ruining [her coffee].” Robertson laughs. “We need to educate people.”