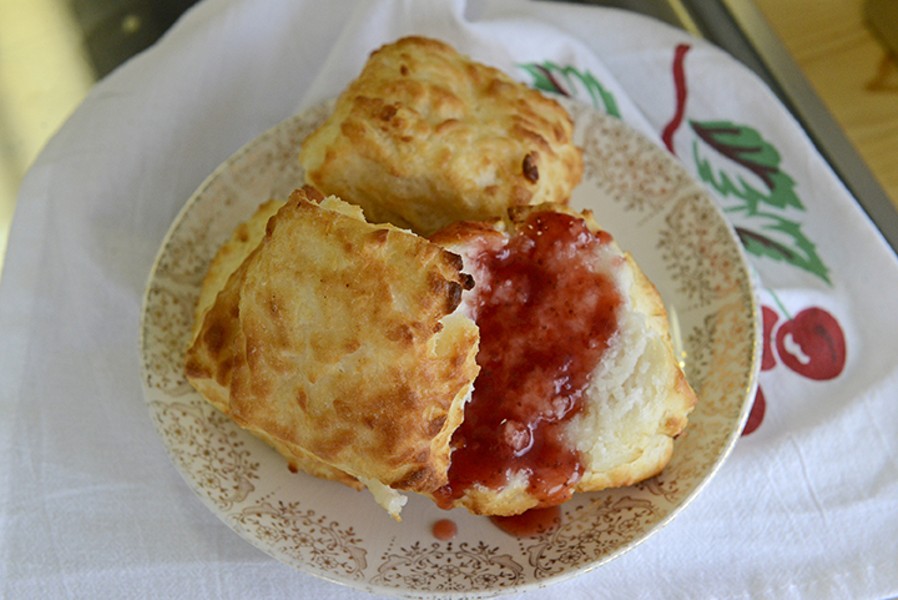 UPDATE: Early Bird Biscuit Co. opened Monday, March 28 to the anticipated overwhelming response. You'll find the bakery at 119 N. Robinson St., and its hours are Tuesdays-Fridays from 7 a.m.-2 p.m. and Saturdays from 7 a.m.-noon.

12-16-2015: Fan residents, there’s exciting news for you — if you’re a biscuit lover. And that’s just everybody, I’m confident in saying.

Early Bird Biscuit Co. is moving from its home in Lakeside to the Fan on March 1, according to owner Tim Laxton.

“If you’ve been in our space on Lakeside,” he says, “you know that you pretty much have to go outside to change your mind.” The challenge of that small space meant that Laxton was limited in what he could offer customers. He started looking for a more expansive location where he could serve a portable breakfast on a biscuit — something folks have been clamoring for since he opened the bakery two years ago.

Laxton found the property he needed next door to Halcyon Vintage Clothing at 119 N. Robinson St. It’s also close to Retreat Doctor’s Hospital. And that’s important to him, too: “If you have a loved one in the hospital, we want to give you a comforting space with some comfort food.”

With partner Blanchard’s Roasting Co., the new Early Bird will offer a full barista service. Laxton plans a decor that’s reminiscent of the 1930s and ’40s. And he’ll have room to display his collections of butter churns, early appliances and other period pieces. “There will be cool music and nods to my Appalachian roots,” he says.

The new location also will give Laxton a chance to start offering regular biscuit-making classes. “It’ll be an interactive space,” he says. “I want to teach people how to make the things here.”

“I’m so excited to be in a location that’s walkable,” Laxton says. “I spent my college years in the Fan and it’ll be nice to see folks just getting out of bed and walking over for a cup of coffee.”