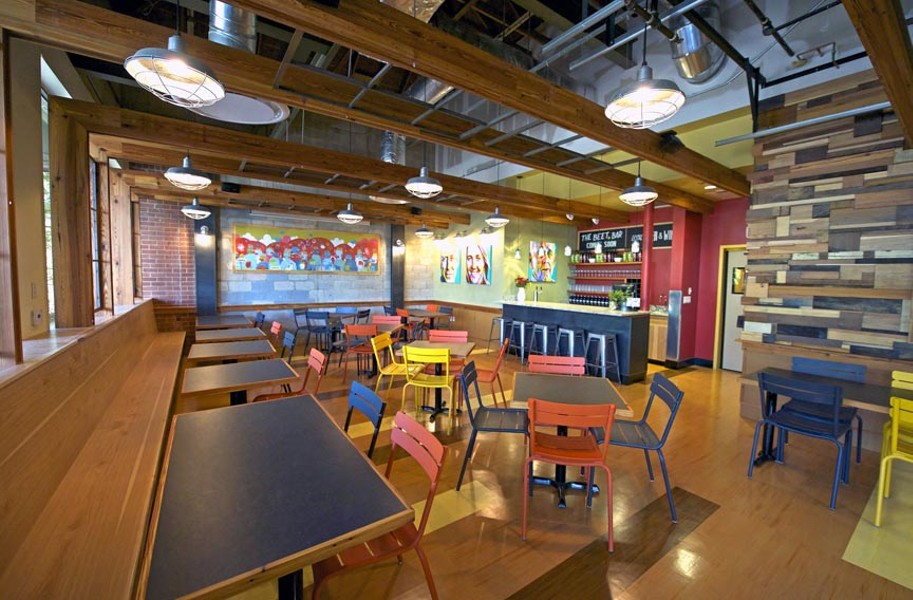 Richmond and its battling grocery stores -- here’s one quote from an out-of-town friend: “What’s up with this place? It’s like Crazy Cucumber Town.”

Take the exit from Interstate 195 to West Cary Street and you’ll find Kroger, Martin’s, Fresh Market and Ellwood Thompson’s Local Market -- all within a four-block radius. Throw in a couple of major drugstore chains, and there isn’t lot you can’t buy on your weekly shopping trip.

Ellwood Thompson’s has held firm in its niche by steadfastly supporting local vendors and offering as many organic and nongenetically modified products as it can. It’s diversified through the years, adding a meat-and-seafood counter, a vast hot bar, sushi, growlers and most recently, a juice bar.

In its last expansion, the store added a community room that proved to be enormously popular. But owner Rick Hood and Colin Beirne, Ellwood Thompson’s marketing manager, thought it could use a makeover.

“We wanted to invest in the space,” Beirne says -- “really make it feel like the rest of the store and less like a classroom.”

They also were thinking about how they could expand the store’s prepared food options, along with its café. “We looked towards the parking lot and noticed we were crazy at lunch time,” he says. That left breakfast and dinner -- two times that didn’t see as much eat-in business.

Inspired by Busboys and Poets, a progressive coffee shop and community space that has six locations in Washington, Hood and Beirne re-imagined Ellwood Thompson’s community room as a bar -- with beer and cider on tap, wine, music and film screenings. With garage doors separating it from the original dining area, the room could still operate as an event and meeting space at other times.

The Beet Café opens Sept. 3. Because Ellwood Thompson’s has a liquor license for the entire store, you can not only choose your own spot to quaff a glass, but also buy a bottle from the wine department, have it opened without a corkage fee and keep it chilled behind the bar while you sip.

Food options are expanding beyond prepared food and the hot bar to an open, made-to-order kitchen called Create. It serves waffles and omelets, sandwiches and what the store is calling earth bowls -- things such as quinoa, chickpeas, peppers and baby kale heaped high and lavished with a basil-tahini dressing, for instance. Plus, the sushi selection has doubled.

Only a few weeks ago, the store’s juice and coffee bar expansion was the first to be finished. Taps from Barefootbucha and Blanchard’s Coffee Roasting Co.’s cold-brewed Hair of the Dog were recently added.

“We’re really trying for this space to be that third place,” Beirne says of the Beet Café. “You know, a hang-out place for folks that aren’t really bar people -- this is more of a healthy outlet for them.”