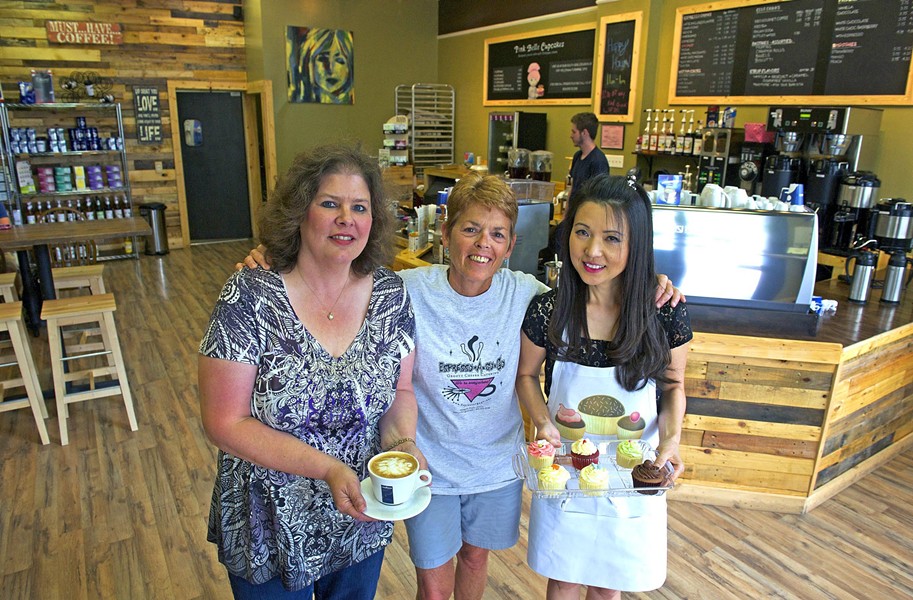 Coffee is the lifeblood of downtown. The month-old Main Street Coffee, now filling the space left by Sugar Shack when it closed in January at 1110 E. Main St., is based on a different concept than the usual Starbucks model.

"It's kind of like a co-op," owner Jeni Wenrich says. Two other businesses have joined her in the venture — Pink Belle Cakehouse and Espresso-A-Go-Go. "I told them, 'You don't have to pay anything, but I need an hour of your labor, and I will help you promote your business, while you help me promote mine.'"

Originally, she was helping her Sugar Shack friends find a tenant to sublet the space. Her husband asked her: "Why do you keep looking for other people? Why don't you just do it yourself?"
Wenrich had owned another coffee shop, Ty & Co. Espresso Restaurant, which opened in Powhatan County in 2006. "I learned a lot from that first venture," she says. But operating a business in the city of Richmond is new.

Fortunately, she knows a lot about coffee — but comes at it from a different angle. She works for Advanced Coffee Tech Service, a company that sells and services coffee equipment. Espresso machines, grinders, regular coffee makers — she understands the infrastructure that keeps her shop running better than most new owners.

When Wenrich was looking for tenants to fill the space, she'd approached Pink Belle Cake House and Espresso-A-Go-Go. Then when she decided to open Main Street Coffee herself, she asked them to join her. Both owners wanted a downtown presence but weren't ready for their own brick-and-mortar shops.

Main Street coffee serves pastries and coffee for now. In the future, Wenrich hopes to add salads and sandwiches. But she doesn't want to expand too fast, she says: "I don't want to get crazy because I know, learning from the first [coffee shop], that it's too easy to just add, add, add." mainstreetcoffee.info.

Expanding: Rappahannock owners Ryan and Travis Croxton are taking over the space next door to the restaurant. They've started construction on a small raw bar and market, Rapp Sessions, that will be connected to its larger sibling through open doorways. … Hardywood Park Craft Brewery announced a $28 million expansion in Goochland County. You'll find an interview with owners Patrick Murtaugh and Eric McKay on Page 14.

Outdoor Dining: Lunch/Supper is building a 30-seat patio that should be open in about a week. lunchorsupper.com.

Praise: Condé Nast Traveler named Richmond as the Southern food destination you need to know about. … ​Hardywood​ Park Craft Brewery, named one of the world's best eco-friendly breweries by Epicure & Culture, was also Thrillist's best craft brewery in Virginia. And the website named both Caliente and Burger Bach as places to find the best burgers in the state. … Pizza Tonight's pig and fig pizza was named one of the best offerings from Virginia by USA Today.

Happenings: Blue Moon Brewing Co. is about to turn 20 and is celebrating on Friday, July 31, at 6 p.m. at with Howl at the Moon: a Piano Pop-Up Bar at the Locks. There will be an actual blue moon hanging in the sky that night, food by Casa Del Barco, and proceeds will benefit Fetch a Cure. Search Facebook's events. … Antoinette Essa will host the seventh annual Jazz & Food Festival at St. Elizabeth Catholic Church on Saturday, Aug. 1, from noon-7 p.m. steliz3c.com.