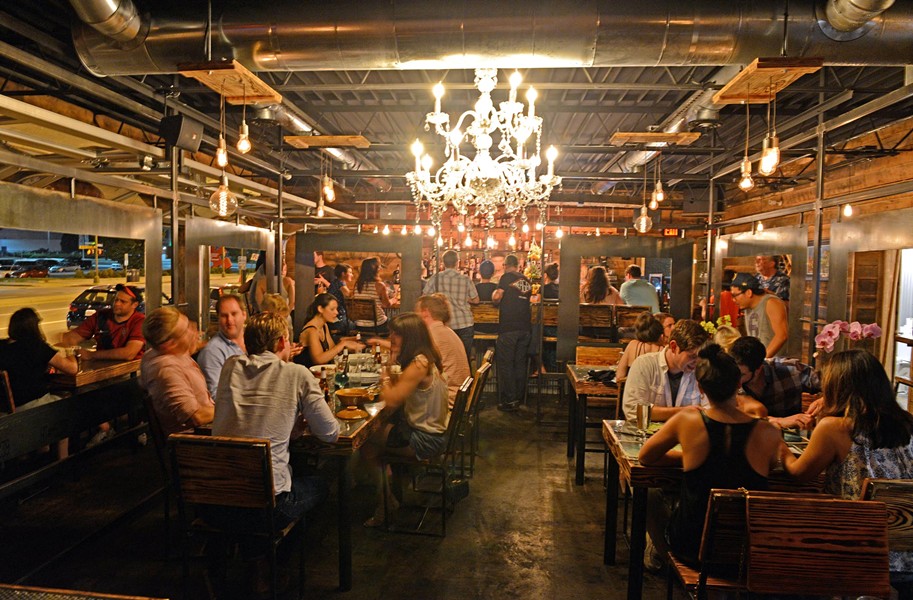 Scott Elmquist Co-owner Brandon Pearson designed and constructed the interior of Sabai from a mental plan meant to evoke Thailand.

Brandon Pearson never thought he’d come back from Thailand. The Sabai co-owner left for a visit five years ago and the country wound up as his permanent home.

“I just fell in love with it from the moment I walked outside of the airport,” he says. “I looked at the sky, all the smog, and the heat hit me, and I knew I was in a completely different world from anything I’d ever known.”

Pearson came back to Richmond last summer when his mother suffered a brain injury in an accident. While here, friend Joe Kiatsuranon of My Noodle & Bar and Mom's Siam convinced Pearson to start a restaurant with him. Along with third partner Jason Lough, Sabai opened in the spring.

“We wanted to give Richmond a taste of real Thai food,” Pearson says, “like the kind you can eat on the streets of Bangkok.”

Although the kitchen and equipment came with the place — the former Yummy Chinese Restaurant at 2727 W. Broad St. — the rest of the restaurant was built from the ground up, and Pearson designed everything himself.

He constructed it all too. “I couldn’t find a contractor to do it the way I wanted it,” he says. Instead, with his background in metalworking, he took on the task, working from a design in his head as he went along.

You’ll find metal partitioning that defines the dining space, and lots of distressed and reclaimed wood. Pearson, who also has a custom furniture business in Scott’s Addition called Scofflaw Industrial, built the tables and chairs from iron and wood-burned yellow pine, as well as the maple-edged bar.

“This isn’t a [classically] Thai design,” Pearson says. “There are all these little hidden places throughout Bangkok that most people would never see,” and he was inspired by the overall feel of bars and restaurants that he’s visited over the years throughout the country.

And no matter how high the temperature gets, the garage doors that front the restaurant roll up at opening time. “It’s on purpose,” he says — “I just wanted to make this feel as Thai as possible.” And that includes the heat.

Right now he’s building furniture for the patio — seven steel, picnic-like tables that should be in this week. Work also has begun on a speakeasy space in the back for private events. It will have its own bar and staff when it opens.

Despite starting two businesses in Richmond, Pearson isn’t putting down roots. He and Kiatsuranon are opening a cocktail lounge and record shop in Bangkok’s Chinatown.

“My home is in Thailand and it always will be,” he says. “This is the longest I’ve ever been away since I first visited. I’m definitely homesick.”

CORRECTION: When this article first published, Brandon Pearson's last name was misstated as Pierce. We regret the error.
Prev
Next