The Cultured Swine food truck will debut as a restaurant in January. 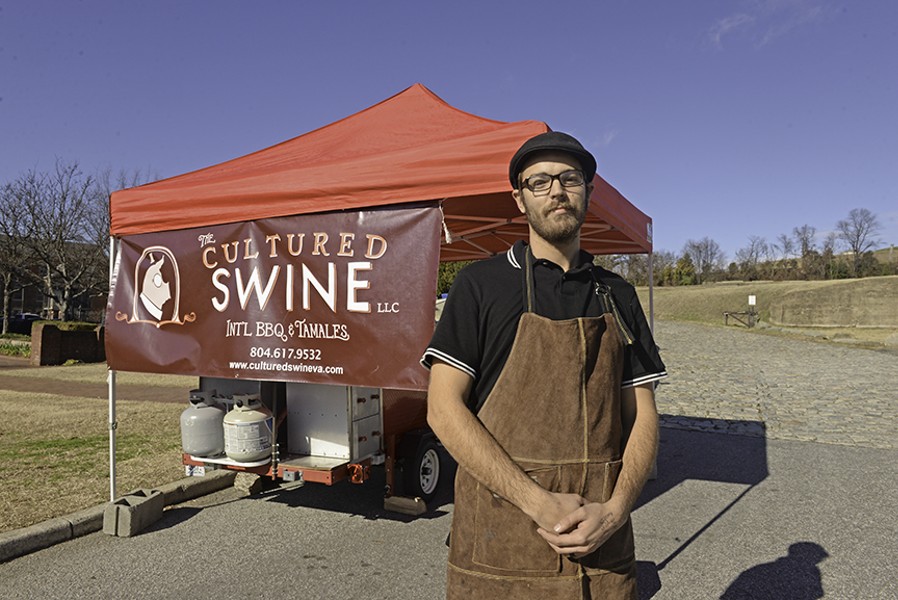 Scott Elmquist Corey Johnson in front of the mobile version of the Cultured Swine. He'll soon open a brick-and-mortar version on Second Street.

It's just a baby food truck, really -- the Cultured Swine has only been around since October. Co-owner Corey Johnson cooks out of Michael Ng's commissary at Thai Corner and drives his truck (really, a trailer) to a spot near Tredegar Ironworks.

"I'd gotten the opportunity to see how he operates, and I like it," Ng says. "I thought, 'Let's put him in this retail store that we have.'" Johnson, along with partner and longtime friend Eric Freund, jumped at the chance.

At the beginning of January, Johnson and Freund will start getting the space on Second Street next to Big Herm's Kitchen ready for the brick-and-mortar debut of the Cultured Swine. A late January/early February opening date is planned.

Johnson grew up in the restaurant business. "My father was a fisherman," he says, "and my family had a fish house down in Portsmouth." He came to Richmond to attend to VCU and ended up working in restaurants all over town while he was in school. He found himself on Station 2's food truck and was offered a management position.

"I didn't see me doing burgers," says Johnson. "That's when I left and went to Alamo [BBQ] and really started to focus on the concept of doing barbecue."

He started thinking about his own food truck while he was managing the kitchen there. The culinary focus, the name, even the equipment were the easy parts. "The actual getting-legal aspect of getting a truck is the hardest part." It took him about eight months to get all the paperwork done.

Johnson and Freund will go through another legal process, including obtaining an ABC license, to get their restaurant open. It's a small space -- only eight small tables and seven barstools can fit.

"We'll have the same menu, but expanded, that the truck has now," says Johnson.

He's looking at street food from around the world for inspiration -- think banh mi -- in addition to the things the truck serves currently, like Korean bulgogi or Jamaican-inspired jerk chicken served taco-style, and tamales stuffed with pulled pork and potatoes.

"We're still in the experimentation process," he says.