Pasture Chef Shawn Burnette On His Move to Richmond 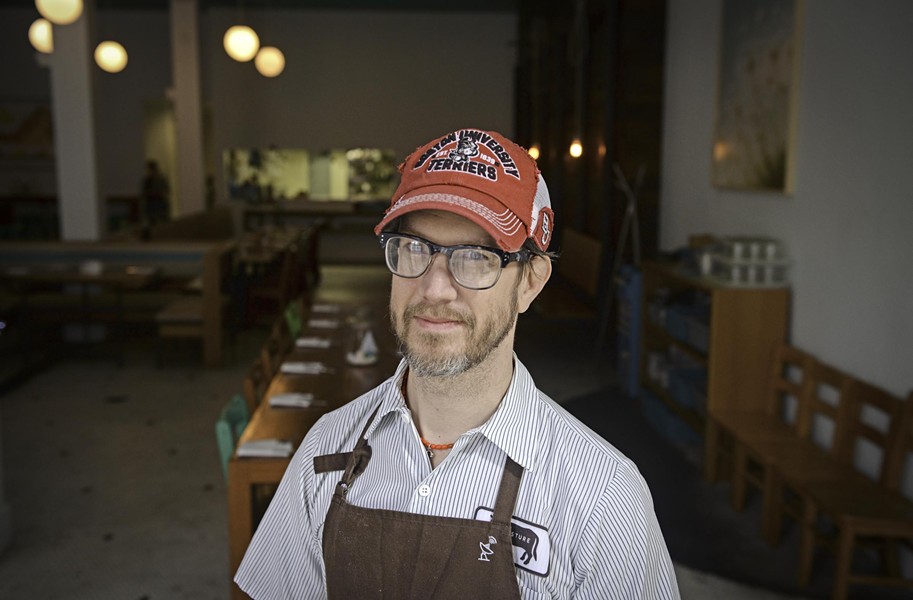 Scott Elmquist Shawn Burnette comes full circle as he takes over the kitchen at Pasture.

The first time Shawn Burnette cooked with Charleston, South Carolina, chef Sean Brock was in the kitchen at Pasture for Off-Broad Appetit. He’d seen Brock on Charlie Rose’s show a week earlier. “I knew of him, but didn’t know anything about him — I sent him an email [asking for a job] that night,” he says. Burnette got that job as soon as he walked through the door of Brock’s flagship restaurant Husk a few days later. “I went home to gather my things to move from New York to Charleston. [Sean called] and said, ‘You’re from Richmond aren’t you? Come cook a dinner with me.’”

Burnette, now Pasture’s newest chef, and his wife, Cindy, met as dance partners in Richmond, and Burnette, like lots of other artists, gravitated to restaurant work.

“I’d go in as a bartender and somehow I’d end up in the kitchen,” Burnette says. “It wasn’t a planned out thing.” The couple settled in New York and were raising six kids when Burnette had the opportunity to become bar manager, which then led to a series of general manager jobs in New York restaurants.

He still wanted to be in the kitchen though. “At this point, my cooking had developed a lot. But I had six kids — you can’t just stop.” His wife, however, was supportive of a career change and told him to go ahead and make the switch. Just do it, she said. “I couldn’t get anyone to hire me as a cook, so I started as a dishwasher.” He went from making six figures to making $15 an hour.

That was in 2008. “I kept interviewing through Craigslist and I got lucky,” he says. He landed a job as a prep cook to chef William Hickox at the now closed Mary Queen of Scots, and Williams took him along as his senior sous chef to Del Posto. He went on to Husk and most recently cooked as sous chef at April Bloomfield’s Breslin Bar & Dining Room in the Ace Hotel.

“I’ve been fortunate to stumble into people that have taken very, very good care of me,” says Burnette, when I suggest that his impressive six-year career trajectory must have a lot of talent fueling it.

When Pasture co-owner Michele Jones asked him if he knew of anyone that might be interested in taking over the kitchen in Richmond, Burnette couldn’t resist. “That kind of exploded in my head,” he says. “It’s a huge opportunity to move forward and do all kinds new stuff.”

Openings and closings: The West End can get ready to go into a doughnut coma: Sugar Shack opened its latest location at Parham and Quioccasin roads. … The Frog remains supreme. Sweet Frog, that is. Froyo competitor Yapple, which opened up two doors down on Cary Street two years ago, is now closed. … Virginia Commonwealth University barbecue lovers can rejoice. Chesterfield’s Flyin’ Pig is opening a new location in the old Empire space, which closed this fall. … Monument Coffee and Records shut its doors Dec. 1. … Coriander, which specializes in Armenian cuisine, opened in the already diverse food scene of Carytown, in the former Mrs. Marshall’s Carytown Café spot. Prior to Coriander, Selosa occupied the space. … Twin Hickory Town Center’s BT’s Deli is closed after seven months, as reported by RVA News. …The newest location of Brew is scheduled to open on Dec. 15 at the Shoppes at Bellgrade. … Tarrant’s West opened on Monday.

Chef show: Vivian Howard of the PBS show, “A Chef’s Life,” will make an appearance and offer a demo at Southern Season on Dec. 11 from 3-6 p.m. southernseason.com.

Books and beer: Hardywood Park Craft Brewery and Chop Suey books have invited 27 authors to their first annual Books and Beer Holiday Brew-Ho-Ho on Dec. 14 from 3-6 p.m. In addition to trying Hardywood’s famous Gingerbread Stout, you can get a book signed by your favorite author, dance to live music and fill up on food from Goatocado, BoDillaz and Bonbontruck. hardywood.com.