Chef Vivian Howard to make an appearance at Southern Season on Dec. 11. 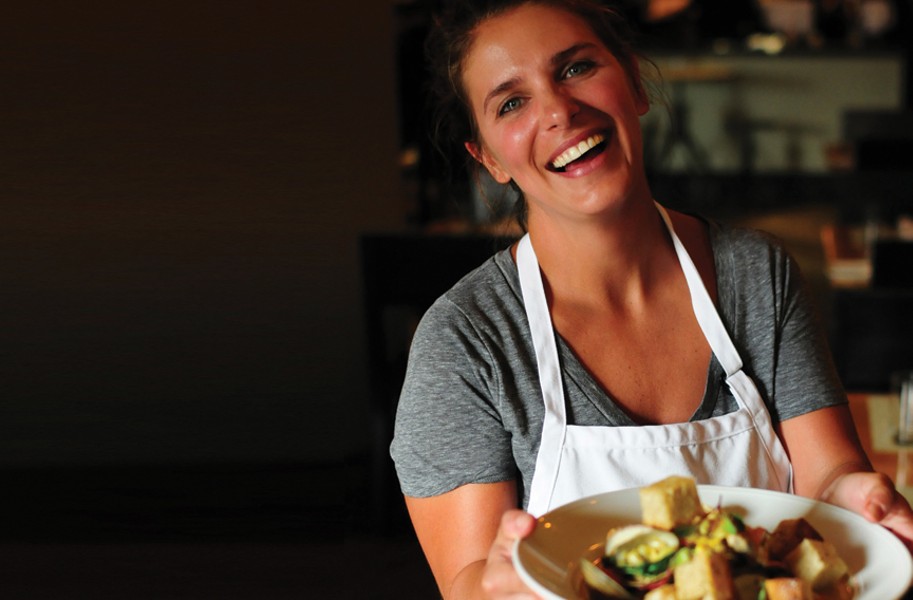 When you talk to Vivian Howard about her Peabody award-winning PBS series, "A Chef's Life," she isn't comfortable with the term reality television. "We [she and filmmaker Cynthia Hill] were trying to make a documentary series that follows my life," she says. "The difference is that, with each episode, we're actually trying to tell the story of an ingredient, and I'm the vehicle for that."

Along the way, viewers get to know peanut and oyster farmers, how to can corn or how to make applejacks (fried apple pie made with dried apples),and what the town of Kinston, North Carolina likes -- and doesn't like -- to eat. It's a mash-up of the sort of documentaries the Southern Foodways Alliance produces and what a reality show might look like if responsible producers set up a camera in the corner of an ordinary family's house. An ordinary family that owns two restaurants, that is.

Howard had qualms. "For sure, it's not something we want to do forever." She's thinking about a fourth season (the show is currently filming the third), but not much beyond that. The camera is in her restaurant, her home, and goes along with her when she visits farmers and other purveyors. With each episode focusing on one ingredient, Howard naturally wonders, "How many ingredients are out there?"

The future chef grew up on a tobacco farm in Deep Run, North Carolina and moved to New York after college. She started in advertising and fell into the restaurant world, working in places like Wylie Dufresne's WD-50 and Jean-Georges Vongerichten's Spice Market. Her parents had other plans for her, however. They decided to lure their daughter back to North Carolina by offering to buy a restaurant for her -- in nearby Kinston.

Howard took the bait and the Chef & the Farmer opened eight years ago. "When I moved back, I wanted all these [local] farmers to grow things the type of things I saw in New York," she says. The longer she was home, however, the more she noticed interesting things that were already growing in her part of eastern North Carolina. "I was surprised by the versatility of ingredients like squash and cucumbers and tomatoes," says Howard. "I could take something that was what I considered very mundane and boring and make it exciting."

Four years ago, she was invited by local farmers to help make sauerkraut out of collards. She'd never heard of it before. "I was completely fascinated by it and decided that I had to do something to document these dying food traditions."

Howard called her friend Cynthia Hill and convinced her to come to North Carolina to make the pilot of the show that would become "A Chef's Life." PBS was interested and encouraged them to make 12 more episodes -- although they didn't offer to pay them or guarantee that the show would be picked up. "But we wanted to do it, so we did -- we raised the money for the season through a [a sort of] Kickstarter campaign," she says.

Since she began the series, the Chef & the Farmer has been gutted by a fire, rebuilt, and Howard and her husband, Ben Knight, have opened a second restaurant, Boiler Room Oyster Bar, in Kinston. "[The Chef & the Farmer] has changed tremendously and not at all," she says. "My role has certainly changed because people come there and they want to see me, so I can't really do my old job anymore running the line. We're trying to keep things the same, while improving."

In the meantime, she has plans for a cookbook, and she's teamed up with gourmet market Southern Season. "Part of what I want to do with them is appeal to a younger audience," says Howard. "Now that people are interested in cooking again, I'd love to share with them some of my favorite gadgets, and we're developing a little line of products that will be nut- and grain-oriented, and fruit-oriented."

If you'd like to meet Vivian Howard in person, she'll make an appearance and do a demo at Southern Season on Staples Mill Road from 3-6 p.m. on Dec. 11. For more information, visit southernseason.com/events.